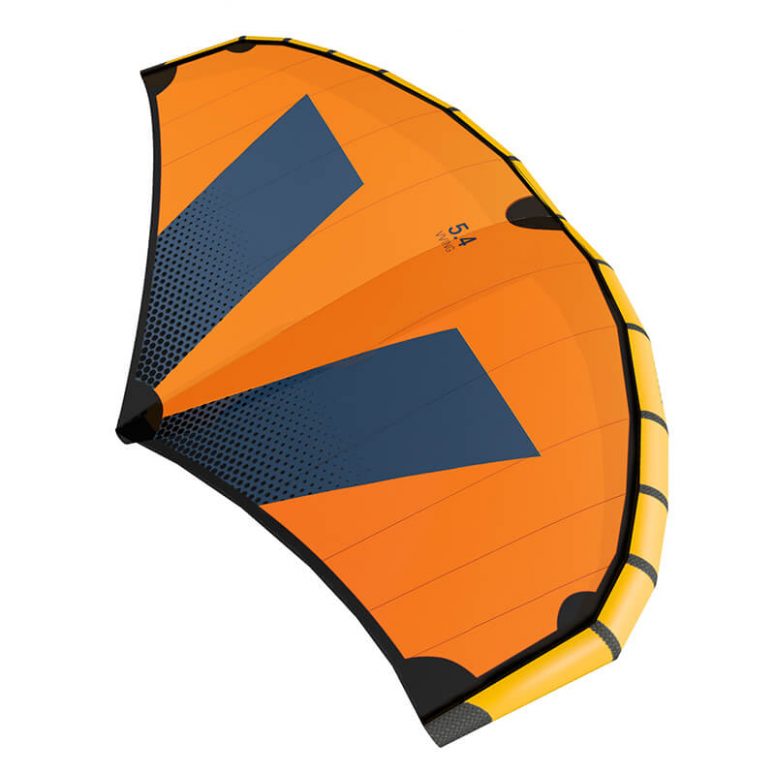 VAYU is a new brand on the wing market and they’re jumping in with an interesting new feature on their wings: a foldable wishbone that they called Bridge Boom technology. I had the 4.4m on test, which is part of a range of sizes that also includes a 3.4m, 5.4m, and 6.4m

Featuring a thick leading edge and profile combined with a Teijin D2 canopy (without battens) plus the Bridge Boom central strut (which is a strut with a boom mounted on it) the VAYU VVING has a slight dihedral shape combined with a clean panel assembly. The design is pure and effective and results in a very well-balanced wing.

Due to the boom, the VVING is a little bit heavier than other 4m wings but this is compensated by the extra precision added by the boom which makes the wing extremely reactive and easy to maneuver. This extra weight on the strut also makes a positive difference when waveriding. The wing is extremely stable when towed behind you, and will allow you to engage faster maneuvers without the wing tipping around. Providing a really stiff connection with the wing, the boom, combined with the really forward-centered profile, gives you a really comfortable extra amount of power for take-offs and pumping, and the overall balance of the wing will help you find your hand positions instantly. It really is fun to maneuver around, and will flip around your fingertips without any lag.

The overall balance and ultimate control are the prime features of this wing. It provides a very comfortable amount of lift and is suitable for freestyle, but we felt that where it really excelled was as a waveriding-oriented wing where it was stiff, maneuverable and powerful, with the Bridge Boom at the heart of this. The VVING gives you extra speed when attacking a bump or a wave, and downwind foiling is easy, smooth and intuitive. Opening the wing downwind will throw you down any kind of bump at maximum speed, while the extra precision provided by the boom will help you keep the wing in a single hand. I really enjoyed this particular feature. The VVING gives you a comfortable amount of glide to tack around but it is not designed for racing. It is not the fastest wing we’ve tested, but this is counterbalanced by the sheer amount of fun you’ll have when riding with it…

Overall a very impressive entry into the wing market by VAYU and it is great to see some fresh thinking and an effective ‘new’ style of wing.