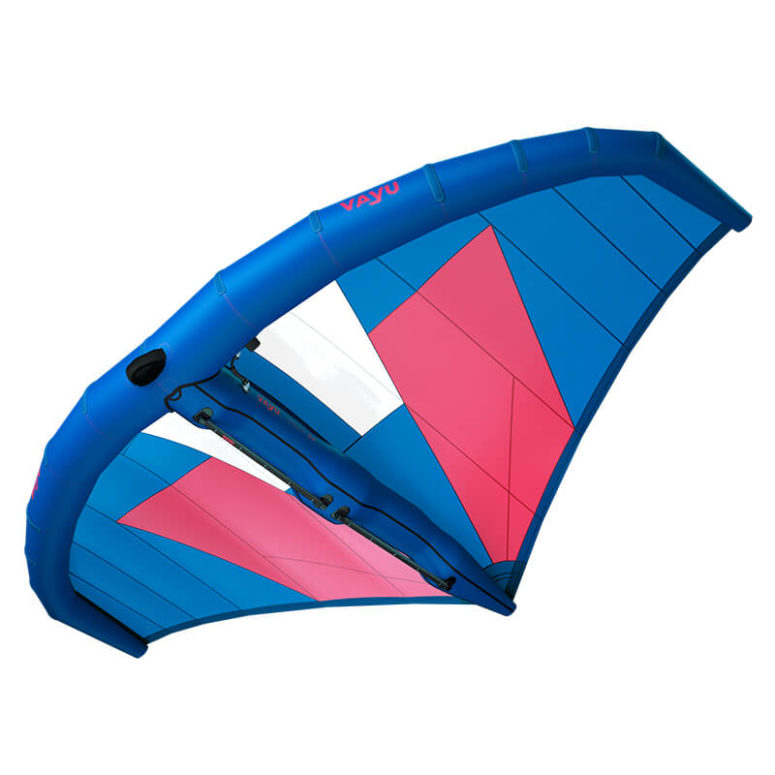 The Vayu VVing V2 is the second generation of the VVING model that comes in a range of sizes: 3.4, 4.4, 5.4, 6.4 and 7.4m and, compared to the first version, enjoys a refined architecture and a lighter construction coupled with an even stiffer and reactive construction and some open PVC windows for better visibility. It is also reinforced on all the segments and tips, a great extra touch-up from the first version.

Featuring a thick and ultra-rigid segmented leading edge combined with a Teijin D2 canopy and a unique center strut design equipped with their refined double Bridge-Boom, the Vayu VVing V2 has a slight dihedral shape combined with a beautiful panel assembly where a PVC window is naturally positioned above your front hand, and will give you clear visibility downwind without moving your head. The design is pure and very effective, and it is a well-balanced wing.

On the water, The V2 is lighter than its previous incarnation and the first feature that shows itself off is just how responsive it is. Someone used to soft handles might need just a little extra time to come to terms with this, especially if you’re first heading out in gusty wind conditions. The wing is extremely reactive and easy to maneuver while being ultra-responsive to any finger impulse. It is super stable when flagged out and will allow you to engage faster maneuvers without rolling onto a tip.

Providing a really stiff connection with the wing, the Bridge-Boom, combined with the very forward centered profile, gives a very comfortable extra hit of power for the take-off, and the overall balance of the wing will help you find your hand positions instantly. The new boom grip doesn’t slip at all in your hands and they will stay exactly where you want them to. Overall it is really easy to maneuver and will retain full control as you adjust your fingers.

The very thick profile and leading edge on this generation of VVing helps create a lot of confidence and will help push you the most hardcore conditions by proving itself super stable even at extreme speed. Compared to the first version, the V2 has a lot more upward lift and is therefore better equipped for jumping and racing. It generates a lot of trust and lift, and once flying it really feels balanced under load and will help you land your tricks with that plenty of extra float…

In the surf the V2 is very crisp to ride. It will give you that boost for wave entry and help you catch anything, but it can dip slightly when flagged out. That’s to be expected though – the VVing V2 is a freeride racing and freestyle oriented wing, and if you want something 100% dedicated to waveriding then you need to check out their new Aura wing.

The main difference against the previous model is its upwind capacity. The first version had a lot of dihedral and struggled in those close-to-the-wind angles. The V2 however gives you a very linear amount of power and stays effective very close to the wind, maintaining high speed upwind angles easily. Stiff, maneuverable and powerful, the VAYU VVing V2 is a machine for freestyle, racing and freeride, and will also perform well in the surf too should you need it to. AB