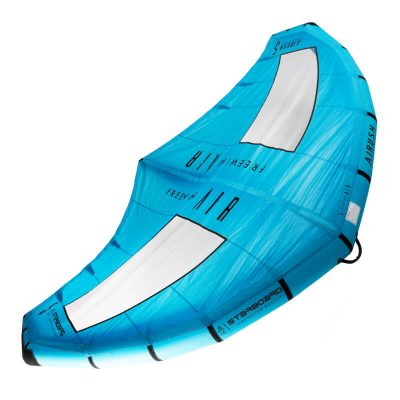 Starboard and Airush have collaboratively brought out a wing using their knowledge from their respective windsurf and kitesurf brand expertise. Airush tinkered with inflatable wings as a brand as far back as 2012, but shelved the project in 2015 as they couldn’t outperform their windsurf rigs. With the advent of SUP and surf foiling and the efficiency that brings, the game changed, and they have been reactive in developing and bringing a production wing to the market.

From a build perspective it has combined a lot of good elements. The wing is relatively squat and mid-aspect, making it good for shorter people and beginners, avoiding the dreaded tip hitting the water and the wing rolling over that many initially experience. The larger sizes have the wingtips angled in a touch to avoid this further. The wingtips include some decent Kevlar scuff protection for rocky spots.

The central strut has a generous diameter along its entire length, making it extremely rigid to pump against. Handles-wise, there are plenty of options, with five down the length. We had the 5m wing on test, and mainly used the first and fifth handles, where the wing seemed to feel most neutrally balanced and engage the power smoothly. In the hands they are chunky and stiff, giving a positive feeling without being too huge. Y handles are present connecting the strut with the leading edge at 45 degrees. These are relatively small and don’t span too far back onto the strut; they are useful for the initial stages of pumping as a beginner and conversely for making your transitions once you are more advanced. Sewn into the strut handles are some solid looking harness line attachment points, a clear windsurf-inspired addition for those long upwind slogs.

Leash-wise, it is Dyneema with some shock cord bungee to take up some of the slack – it’s quite long compared to others on the market. An optional spinner is included which is ideal if you are in a tight spot where you are tacking a lot; this has a neat neoprene cover.

Immediately you notice a large set of windows – they seem to be placed quite far forward on the wing and provide some improvement in vision for where you are heading as well as downwind. The windows mean the wing needs to be rolled for storage rather than folded, so a traditional cylindrical roll bag is provided. This isn’t quite as practical as a backpack when carrying your rig any distance, but it gets the job done. Behind the strut is a deep profiled section of Ripstop to build some serious depth into the canopy. There is not a huge amount of tension built into the canopy as the wing inflates and it has the ability to luff very effectively. There’s a stout band of Dacron framing the canopy and some darting running up the main seams to avoid flapping.

In the hands, the Freewing feels efficient, and not massively grunty in its low end. Pumping against it is simple and responsive due to the massive stiff central strut, and the Freewing rewards good technique to get you on the foil in lighter airs. Once you’re up, its engaging ­­­­­ stiffness of that center strut gives the Freewing a windsurfing feeling, it is at its most smile-inducing for straight-line blasting and loading up for jumps on smaller boards. The top end is quite extended with easy depower, particularly if you tip the leading edge into the wind. The wave performance is positive with the wing luffing adequately. You can feel the weight of the windows a little when it’s onshore and lighter wind conditions.

The cross-discipline knowledge from the two brands is apparent in the final product, and amidst its current competitors the Freewing fairs well in terms of performance attributes without any compromises, and is a robust all-rounder for all levels of riding.