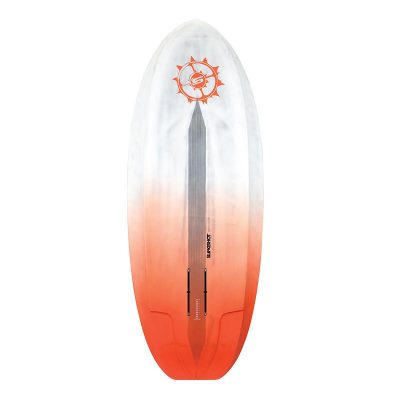 The Outwit is Slingshot’s latest hyper modern spaceship-shape SUP foil board, which has a strong application for wing surfing. Design focus has definitely been centered around a very early take off and it somehow manages to hide a generous 120L of volume distributed largely in the center of its compact length. The build is delightfully light, with the 6’6 weighing in at around seven and a half kilos and the brushed and sanded paint finish is minimal and seems fairly hard wearing. Not much shimming was required to adapt to other foils as the rear of the board has very little rocker in the track section. At 90kgs with the 6’6, the rounded outline shape, central volume distribution and lack of parallel rail makes the Outwit fairly challenging to paddle into a wave as a straight SUP foil, with the volume distribution promoting a coracle-like tendency to rotate quickly under heavy paddling and make tracking forward a little technical, but it is certainly possible to get into a wave. So stepping up to the larger sized 7’6 would be recommended for a pure paddling experience. Where the 6’6 really shines is with a wing. We tested with various 1800-2000cm2 wings in wind ranging between 15 and 25 knots and found that there’s more than enough volume to clamber on and get planing on your knees – even with pretty heavy chop and white water. The defined chined rails and stepped rear section in the tail promote a very early take off and all the board wants to do is get straight up onto the foil. Once you’re up there you can achieve some decent angles upwind and roll the board right over with no chance of catching the rail. It feels nimble, and has low windage once flying, achieving noticeably better upwind angles than some other boards we have tested, and proved much easier to initiate turns back up into the wind. The Outwit is wonderfully gentle to touch down and exceptionally easy to jibe on the water or on the wing, and the convex deck provides a reassuring feel, connecting you into the board rather than feeling like you’re perched on it. The EVA deck pad is massive, comfortable and adds further practicality along with sturdy double leash points.

The Outwit is perhaps a design that Tony Logosz has taken off on a wind-driven tangent and he’s made a good job of it. Whilst it is SUP foil-able, its happy place is definitely propelled by a wing surf. The super low resistance and early take off means you can downsize and head out with a smaller wing, reducing fatigue and extending your session. It’s an extremely fun and agile, super modern foil board design that looks very cool and performs immaculately on the wing surf stage.