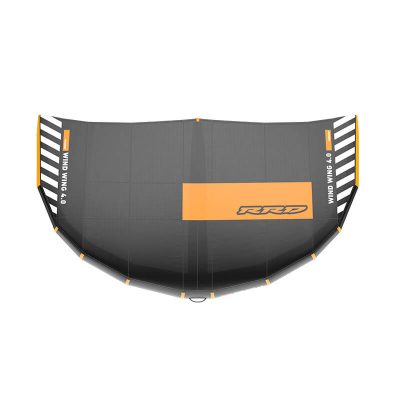 When it comes to the world of Wind Wing technology then it is clear that brands with a heritage in building these type of flexible inflatable products have a jump on the competition. RRD have been in the watersports business for 25 years (they have just released their Y25 quarter-century collection) and as a consequence they know quite a lot about how to make this kind of thing… Perhaps surprisingly they were not one of the brands to jump into the Wind Wing game as soon as it was clear that there was a rapidly growing market for them and have instead waited a year or so before bringing their take of the wind wing to the market. Looking back now and it pretty clear that this was a sensible move – a lot of the 1st generation wings have relatively quickly been surpassed by a 2nd generation as riders have quickly evolved the new sport and their expectations of the product, and brands have consequently evolved their products. The RRD Wind Wing launch has also been supported by some of the most impressive media that we have seen – mainly from their crew of your wing rippers who spent plenty of time gathering footage in Cape Town before lock down. So it was off to a good start.

Getting the Wind Wing pumped up and the first thing that jumps out is: it’s black, very black! RRD have gone full stealth mode and the Wind Wing only comes in a black colorway with some subtle orange details – no one is going to doubt the brand of wing that you are shredding around on. We had the 4m on test and, unlike many other brands, this has the centre strut attached to the wing canopy. Even on the beach this clearly gives the wing more stiffness and notably less flutter. The centre strut has also has a kink in it before the first handle (again something we are seeing more of on second generation wings) enabling the strut to attach to remain flush with the canopy and minimise flapping at the front of the canopy. Then there are five handles which are stiffened internally to ensure that they hold their shape pretty much completely making it easy to grab them when starting or when making transitions. Overall the build quality is solid, with Kevlar scuff pads and reinforcements where required and this is not the lightest wing on the market, but it is my no means the heaviest and overall it feels like the balance between longevity and weight is on the money.

On the water and the 4m Wind Wing’s stiffness is immediately apparent. With the strut attached to the wing there is very little flutter and the leech also remains super-taught. Pumping the wing to get up on the foil and the low end power delivery is excellent, we found the middle handle pretty useful for getting yourself up onto the board if you are knee starting and then the remaining handles are pretty much perfectly placed to give a good balanced feel when you get to your feet. A few solid pumps and, even in marginal conditions for a 4m, we had enough power to begin pumping the board and were away. Up and riding and the Wind Wing gives a very precise power delivery, almost more like a sailing dinghy where you can sheet in very precisely and deliver power injections when required and – again – the rigidity of the wing really stands out.

Picking up some rolling swell and ‘turning off’ the wing and it swings around behind you very naturally and the Wind Wing will sit behind you and remain super stable. In our interview with Roberto last issue he explained that a lot of R&D hours had gone into this aspect of the foil as it is essentially for wave-riding, and this is evident. The is no outlandishness movements from the wing and – although it is never going to be completely predictable – you can lock into the wave and switch to surf-mode with confidence.

Once your session is done pack up is straightforward with an additional dump valve on the strut – the jury seems to be out on this still but it certainly reduces pack up time by 25%+, so if you’ve got over-excited and stayed out longer than your allotted time that could make all the difference… Overall the RRD Wind Wing delivers all that you need from a wing, and feels very much like an evolved and cutting edge product.