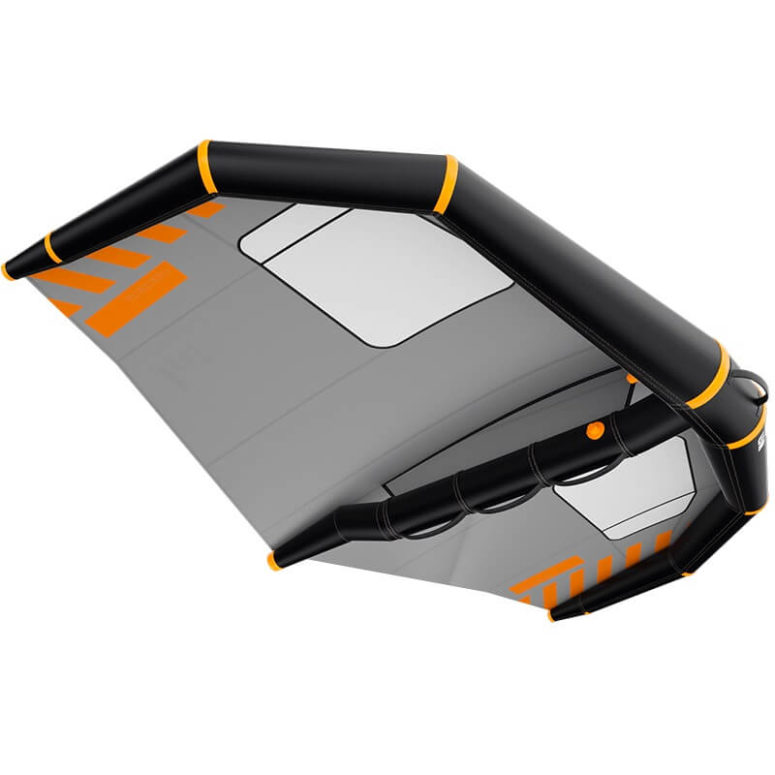 As the wing world explodes so does the line up of wings on offer. The latest brand to bulk out their line up with a wing fitting more specific needs is RRD. EVO’s a suitable name as it reflects the evolution in this lightning-fast sport. The EVO is a super maneuverable wing designed for all round use and for maximum efficiency – it’s the wing that we have seen the RRD team on at GWA wing events and is marginally more focused on the flat water than the surf.

First impressions are good – a nice sized, solid duffle-style bag that you can easily get your wing in to even if the rain is hammering it down and your wing is covered in sand and weighs about 25kg. The orange colorway is striking and we thought it looked very impressive on the beach. The leash length is on the longer side, and is lightweight with a comfortable wrist cuff.

The central strut has a kink in it pulling the final third of the strut into the wing, with the remainder of the central strut sitting away from the canopy, thus providing increased leverage across the trailing edge. The leading edge has a distinct V to improve the responsiveness of the wing and the leading edge design has been reworked resulting in a weight saving of around 200g. Inflation is via two inflation valves, one on the leading edge, and one on the strut. Intuitively we inflated the LE to a higher pressure as we know that a stiffer strut equates to a more tuned in and responsive feeling on the water. We are surprised that this system is not seen on more wings!

The EVO has three ‘large’ handles if you needed further proof that the ongoing debate around handle placement is yet to be resolved! These are relatively skinny without excessive cushioning giving a nice, connected feel to the wing, but not offering much comfort for longer sessions. The EVO has well-placed windows which stretch along the leading edge and give a good degree of lateral visibility.

On the water and the low end credentials are impressive. We had the 4.5m on test and had been testing bigger 5m+ wings on the same day; we found that the EVO matched them for getting up and going. Pumping the wing and it feels stiff for a boom-less wing and there is plenty there to get you up and riding. The wing likes to sit further forward in the window and it sails upwind confidently, particularly on the HA wing we were riding. Conditions were super gusty and the EVO sheeted in and out with some flutter, but was happy to be ridden overpowered but without flapping excessively. The leading edge shape means that you feel you have your arms a little closer to you than usual, which took a little adjusting too but we liked it as it made flagging the wing out super effective and you could keep the wing in its sweet spot comfortably when perfectly powered.

For transitions the EVO showed some impressive characteristics, it really is a ‘whippy’ wing that you can swing around during tacks and gybes very directly and quickly without it behaving unexpectedly. Its ‘arrow’ like profile heads into the wind and out the other side without missing a beat, making this a great option for everything from first learning and mastering your transitions through to hardcore racing. Overall the EVO is a solid addition to the RRD line up which is a solid wing for beginners and for wave riding but a clear step up for flat water lovers…