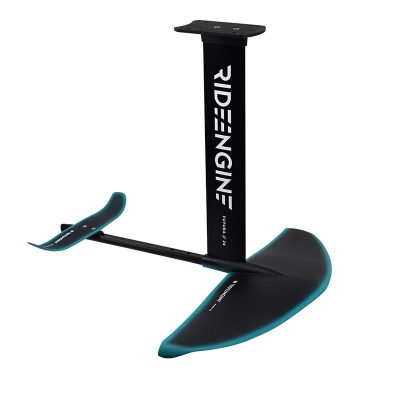 Out of the box, Ride Engine’s packaging is well conceived and executed. The brand’s signature black and blue design language is displayed throughout and each part has its own zippered, padded pocket, keeping it from springing loose. The front wing and stabilizer, also within their own zippered compartments, are further sheathed in neoprene socks. The Futura foil is held together by nine titanium bolts, and the kit comes with three different size Allen keys and a tub of lanolin for maintenance/lubrication. Depending on which of two assembly settings the rider chooses, the foil mates to the strut with bolts of different sizes, requiring separate tooling. Setting 1 places the strut directly over the front wing, while Setting 2, approximately three inches aft, places it over the fuselage. Parts slot into each other tightly enough for a performance fit, but not so tightly as to be laborious or quirky to assemble. With an aluminum strut and fuselage and composite flight surfaces, the entire foil is generally stiff. The wing itself is a thin, low aspect, ‘inverted gullwing’ shape with a 1534sq/cm area. The 314sq/cm horizontal stabilizer has a sizable wingspan of 42cm and is high aspect with upturned winglets. The stabilizer sits atop the fuselage and is bolted through a piece which doubles as a fuselage endcap. The fuselage itself is a solid block of aluminum with an octagonal cross section. The 28in/71cm strut is also aluminum. The foil mates to the board via an aluminum baseplate with eight bolt holes for adjustability. At nearly 11lbs/5kg, the Futura 76 is slightly above-average weight but results in its below-average price point and also ensures it is pretty much bombproof and a sound investment.

The test was conducted on a 25L, 3’6 board with a rider weight of 145lbs/65kg. Conditions varied between three and six foot and no shims were used. It is important to emphasize that the two strut settings on the Futura dramatically change its riding characteristics to the point of feeling like two different foils. In Setting 1 (with the mast forward), the Futura is all-around user friendly and neutral in its front-rear foot bias. When dropping into a wave, the foil lifts gently and progressively, making it easy to manage and excellent for beginners or for tackling bigger conditions. In Setting 2, lift is greatly increased at lower speed, requiring heavy front foot pressure to control. Ride Engine recommends moving the entire foil back in the board box when using Setting 2 to mitigate this increased front foot bias. Even so, Setting 2 primarily rides off the front foot. Down the line, the foil carries glide nicely in Setting 1, and the impression of glide is extended slightly in Setting 2. The Futura has a moderate top speed, and is confidence-inspiring at the top end. As a rough generalization, Setting 1 is better suited to larger waves, and Setting 2 is preferable in smaller conditions. Stability in both settings is impressive, although riders who prefer riding off their back foot may find Setting 2 less stable. In Setting 1, the foil banks predictably and progressively, but Setting 2 demands significantly more front pressure and can be hard work.

Overall, Ride Engine’s Futura is a great foil for newer riders when in Setting 1, with predictable lift and stability throughout all maneuvers. Should it be preferable, Setting 2 provides a more front foot-biased feel, which has potential for downwinding where glide and tracking are especially desirable. These assembly options do make the Futura time consuming to adjust, and perhaps more complicated than it needs to be but, regardless, with many wings to choose from within a fully modular lineup, Ride Engine is well positioned to give riders a platform upon which they can upgrade and develop their foiling styles into the future.