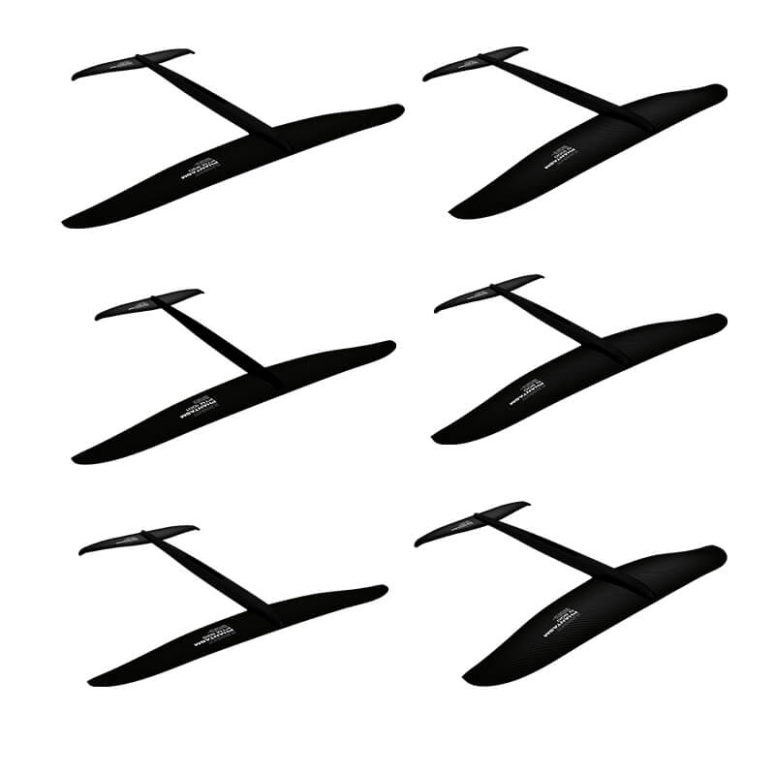 The Slingshot Phantasm PTM series is the next generation of the high-aspect Phantasm foil kit. Three different front wing sizes will cover any riding condition and any skill level. The smallest 825 foil will be great for riders looking for top end speed, the medium 930 foil will offer a balance between top speed and glide, and for riders looking for the most lift and glide, the 1001 will be up to the task.

Slingshot’s new G series front wings are compatible with the Phantasm system and offer a different feel than the high aspect PTM series foils. The G series foils are a lower aspect ratio than the PTM front wings which will provide a bit more range and stability at the cost of some top end speed. The G800 is the fastest of the series, with a top speed on par with the middle size high aspect foils. For riders looking for ultimate pump and low-end control, the G900 or G1000 will be the best match.

Building off the first-generation Phantasm three-piece platform (front wing, fuselage, tailwing), the new Phantasm PTM and G series retain all the high quality, large surface area connections that provide a stiff and solid ride. The oversize mast/fuselage connection provides a very secure, locked in feel, and the rear bolt of the front wing connects the wing, fuselage, and mast, creating one solid system. The pedestal is very large to disperse the foil load evenly, and has a variety of mounting options that will be compatible with nearly every board and rider.

The high modulus mast allows for fantastic energy transfer into the foil and minimizes deflection. Every bit of the Phantasm PTM/G series is designed around a stiff, locked in, energy efficient design that will perform at all levels.

As expected with the high aspect ratio PTM foils, the straight-line speed is extraordinary. As soon as the 825 gets on foil it immediately engages and flies upwind. The shorter span of the 825 combined with the low surface area creates a very loose, free, and fun ride with the key to success being overall speed. Anytime the 825 drops out of its ideal top end operating range, the rider is met with an abrupt and immediate loss of lift. The 825 will perform best for fast sports like wing/kite/tow foiling, or lighter riders prone foiling.

Going one step larger to the PTM 930 will trade a bit of top end speed and overall maneuverability but riders will gain a noticeable amount of glide and low end. The 930 still wants to ride fast but does have a touch of forgiveness that heavier riders, or prone foilers will appreciate. The 930 has plenty of top speed to handle nearly any wave, and has the pump and glide for multiple connections.

In a similar size, but lower aspect ratio, the G800 foil has a little different feel than the PTM series. The lower aspect ratio offers much better low end over the similar sized PTM foil, and more glide for the relative size. For riders who want speed of a small high aspect, but forgiveness of a mid-aspect foil, the G800 is the ticket. The G800 is more than capable for high-speed winging, kiting, or towing, yet has a bit better low end and stall speed than the PTM 825. That being said, the G800 still wants to go fast and carry speed.

This trend continues for the G900 relative to the PTM 930. The G900 rides with a little less top end speed, but makes up for it with low end and pump. The PTM 930 seemed to glide a bit further than the G900, however the G900 had much better low end and stall speeds without the dramatic drop out of the PTM 930.

The large foils are where the differences between the PTM and G series foils become more dramatic, with the PTM 1001 riding like a true high-performance, high-aspect design, while the G1000 had a bit more character and surprising top end for a larger foil. The PTM 1001 is a large high-aspect rocket, with plenty of steady, controllable lift, moderate low end, with a defined yet wide riding range. For experienced downwind riders, or small to medium wave prone foilers looking for a fast pumper, the PTM1001 will be an ideal choice. The G1000 took many of the high-end performance characteristics of the PTM 1001 and blended it with mid-aspect forgiveness and low end. Downwind paddlers will appreciate the early catch and low speed takeoff, but the G1000 is more than capable of handling larger bumps. The glide and pump of the G1000 more than compensates for the top speed limitations of this larger foil.

Both the PTM and G series are fantastic foils, each with their own niches to fill. The PTM foils felt tuned more for high performance riding, they want to go fast and be driven hard. These foils excelled with speed and aggressive riding styles. Wingtip breaches were effortless and felt like a hot knife through butter. The G series foils had a more “all-round” feel to them, with a bit less top end speed but more forgiveness and low-end pump. During testing both the G series and PTM felt very close for top end speed, but on the larger wings there was a noticeable difference with the PTM being faster, and the G series with a better stall point.

Overall, the Phantasm kit is an incredibly diverse and well-constructed foil system that will suit almost every rider on the water. With a large variety of front wing combinations, the Phantasm kit can be customized to meet every location, sport, and condition. For high-speed full-on performance, the PTM foils will exceed expectations. For a bit more glide, forgiveness, and low-end capabilities, the G series is the right choice. ST