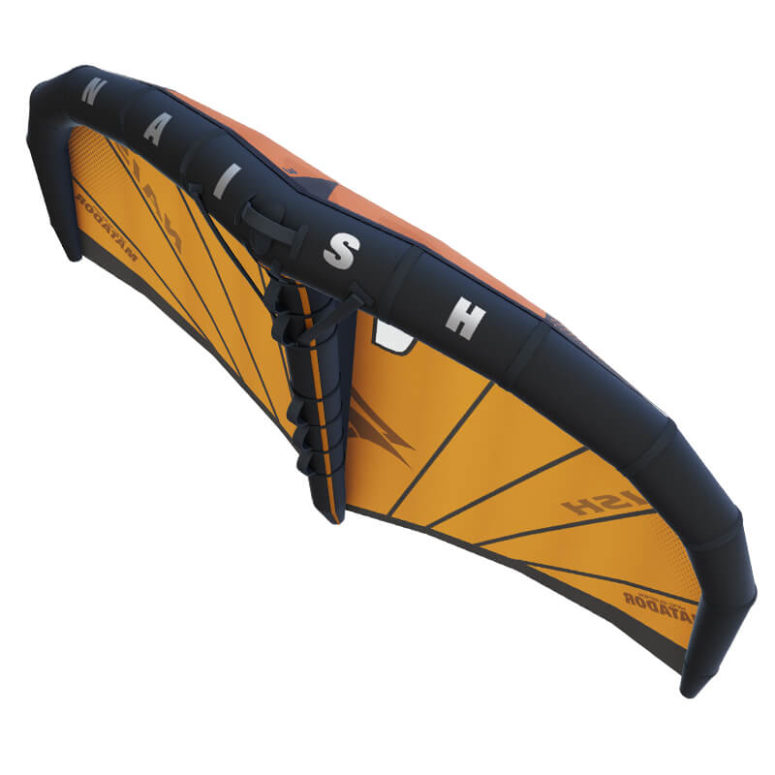 Well-known and long-established Hawaiian watersports goliath Naish were on board very early with the whole wing concept, bringing the first production model to market with the original 4m Wing-Surfer. They then succeeded with the S25 version with some large windows and a more comprehensive size range last year. For S26 the wing range splits into two discipline defined models, with the new Matador focusing on wave performance, available in sensibly chosen wave savvy sizes of 3, 4 and 5m.

Out of the bag, you’re in for a visual treat with an all-new radial canopy seaming arrangement originating from the clew (or back end of the strut for the less nautically inclined). Windows have been minimized in comparison to the Wing-Surfer S26, with two arrow slit style PVC portholes located a little less than halfway along the strut. This is an obvious nod towards weight saving and balancing the weight further forward for flagging out the wing. There’s adequate vision to peek through and get some awareness of what’s around you without compromising overall weight. The turned in tips minimize the span and chance of catching the wing on the water and also make the wing really easy to pivot and switch directions on. This is noticeable when throwing the Matador into a 360 or duck jibe, producing a consistent and satisfying maneuver. Power delivery once flying is easy to turn on and off quickly with minimal angle adjustment, but remains progressive; the easy to initiate power on tap does an admirable job of getting you in the right position on the wave with adequate speed before you decide to flag the wing. The relatively soft dihedral sweep in the wing keeps a lot of sail area exposed to the wind when riding, which no doubt contributes towards the Matador’s grunty per size nature.

Five short loop handles are placed in two groups over the length of the strut which are relatively stiff and a comfortable width for gripping. These are well placed, and we found the second front handle ideal for pumping up in lighter wind, really allowing you to have good clearance between the nose of your board and the wingtip, which is important for aggressive pumping in the lower echelons of the wind range. There are also some removable Y handles which loop on and off with some simple Dyneema connections, which prove useful for beginner and shorter people or those that prefer a few more handles for transfer. These also allow you to micro trim with your front hand if required. If you are more of a minimalist, they are quick to remove and will save further weight and packing space. Inflation is handled with a single iSUP valve and high flow pipe to the strut making it quick and efficient to get up to pressure.

The thick leading edge and inherent stiffness that comes along with the extra structure, coupled with the deep profile, generate really good low end grunt for a 5m, making getting onto the foil a simple process, which is important for a wave focused product where you want to be carrying as little wing as possible on the wave. What we weren’t expecting with these attributes is a decent level of upwind performance, where the Matador is impressive. When luffing the wing on a wave, it’s obvious the weight bias is towards the leading edge and it doesn’t drop out on you.

Peripherals-wise, Naish have provided a short coil leash with constricting cuff and buckle arrangement which velcros on reassuringly tightly. The bag is a small and simple tube affair with a drawstring top, single shoulder strap, and the smaller PVC windows mean it packs down to something far more compact than the previous Wing-Surfer Y25. They’ve also included some bungees and Velcro to attach your pump which is practical if your spot has a longer walk in.

The Matador is a true third generation product, and its clear intended direction for wave use is indicative of the quickly maturing discipline. Its predictable characteristics when flagged help open up more critical and aggressive turns on the wave without having to be conscious of the wing dropping, which is evident even with onshore conditions. The short and squat nature makes handling it as easy as it gets, and it definitely packs a punch power-wise per size.