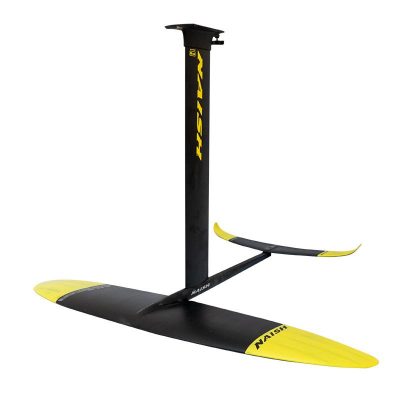 The Naish HA foils bring two extra wings in both 1400 and 1800cm2 to the already comprehensive selection of foils in the modular Jet range. HA stands for high aspect ratio, so expect a thinner wing with a larger span than a standard surf foil. The Naish system has been considerably lightened and updated this year across the range with a slender fuselage and seamless wing connection. The Abracadabra system means that the entire assembled foil slides into a nifty plate mounted on any standard 90mm track system. This means you can remove your foil from your board with a simple thumb screw when you want to transport it, there’s no fumbling with torx screwdrivers on the beach or dropping your track nuts in the sand. Production has been carried out really accurately, and the joint remains remarkably stiff with no discernible wobble between the plate and mast. It’s a convenience that once you’ve had, you wonder how you lived without it. The front wing integrates well into the fuselage minimizing drag and the whole system breaks down into a neat travel case for the folier on the road.

The HA front wing is quite flat with a little downward curvature across the span, noticeably lean in profile. Its appearance is tuned and fast, and that’s exactly how it performs. The high aspect wings also have their own dedicated high aspect stabilizer which, as you would expect, is smaller and leaner than the standard Jet Foil with some gull wing built in for good measure.

Wingsurfing with the HA wing in high wind is focused around pure velocity. It takes a little more speed on the surface to release and fly than a lower aspect, thicker profiled wing in an equivalent size, but once it lifts it really feels locked in and very efficient, with the limiting speed factor perhaps your windage and your surf wing rather than your hydrofoil. Once you adapt to its speed range, and learn to maintain speed through your jibes and tacks, you can make large radius fast turns all day. It’s an aquatic NASCAR racer and very playful to ride.

Translating this into a surf and SUP perspective, what you notice most is the wing’s extreme efficiency, as long as you can generate that initial power to get it in its speed zone it will maintain this effortlessly, without vigorous pumping. The foil glides very well when wave-powered and the pitch stability remains quite high as long as it’s running fast. In a situation when a lower aspect wing would start to get twitchy, the Naish HA locks in and soldiers on. It’s an ideal setup for making huge fast arcing turns, making it perfect for powerful fast riders and quicker, deep ocean waves.