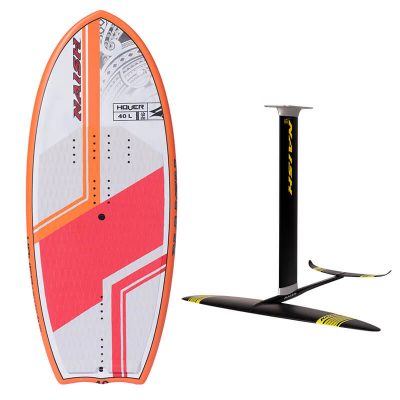 Naish need no introduction, as the legendary brand of all things windsports for many years now. In the beginning of the foil revolution, they set the standard as some of the best gear on the market, with the likes of the Hurley boys ripping on their foils. On test I had the 1240 HA wing with a 310 HA back wing and a 75cm mast coupled with the standard fuselage. The board was the 4’4 Hover Surf Ascend Carbon Ultra. First up, the foil… Unzipping the foil bag and everything was organized really well. The aluminum mast is super light, 25% more than its predecessor, and all bolts are T30 Torx which is quickly becoming a standard for the foil industry. The front wing is nice, thin and light, and I really like the back stabilizer as it’s a delta shape and from the wing tips up it looks and feels great. The fuselage connects to the mast tightly, and there is a new base plate that’s well connected too.

I tested at a perfect spot to test, with some nice fun rollers generally waist high with some a little bigger, and also in perfect, glassy, waist to shoulder high waves at a spot I call 1000 Cheeks in west Maui. On the 1240 HA the first wave I caught easily, and glided effortlessly. The HA 1240 turns super easy with almost no effort. It’s kind of a hybrid HA wing because it turns very impressively but also has some great pump to it. In fact, I liked the pump the most on it, and the efficient glide into that first wave. On the second wave I adjusted it forward for more lift and got it under more control, and it was less tracky and went into turns very nicely. I didn’t need to shim it as the stab felt spot on. Also, I loved how it didn’t sing whale songs like a lot of foils out there! I was able to connect three to four waves pretty easily once I found the rhythm and cadence of it.

Overall I would say that the 1240 HA foil is well suited to intermediate to advanced riders with small surf in mind. That said, it does handle bigger surf, up to shoulder high, without breaching. The neutral stance is nice and the set-up glides very well without much effort.

Onto the board, and I had the 4’4 Hover Surf Ascend Carbon Ultra, the smallest board at 33 liters. These boards really have stepped up their game from previous years, and we are seeing better construction and much lighter boards compared to the polyester resin boards of yesteryear. I won’t lie… as soon as my eyes landed on its curves, I thought “what a sexy outline!”, then I picked it up, and like any good surfer does I started to feel it out – first, the under the arm test, and: wow, it’s light! I love the bat tail and narrow nose and the bevels, it’s a real simple outline with no gimmicks – it’s designed to catch waves, and it does that well. You may know that I usually ride the smallest prone boards I can get my hands on, mostly at 22 liters, so this was a welcome board to paddle. It has a flat rocker and paddles well to get out to the break and fast. The slight concave deck is so comfortable, it’s made to fit your body as you lie into it and become one with the board. The front deck pads are insanely smooth, with no rash after my session and they are thick too, feeling nice and cushy under the feet. The back pad was excellent as well, with the arch bar and kicker mounted quite high on the board to make it feel shorter while you glide.

I weigh 190lbs and I’m 6’3, and from the first wave I was liking the Hover Surf Ascend, as I paddled and glided effortlessly while the wave easily picked me up. You can catch a huge range of waves on this board due to its length. On my second wave I noticed how easy it is to pump for a bigger board than I am used to, and at 19.5” wide it felt responsive while I whipped turns. It seems to have little to no flex that I could feel on pumping and turns, and was a real direct feel that translates into your foiling response. I feel that board performance is as equally important as foil performance, and you will enjoy the Hover Surf Ascend knowing it’s built tough but does not skimp on riding performance. I liked it a lot and would ride it more with my bigger wings for glides and pumps and open wall whips. I love light, little beveled rails and flat bottoms with no rocker… So Naish is on my kind of formula! 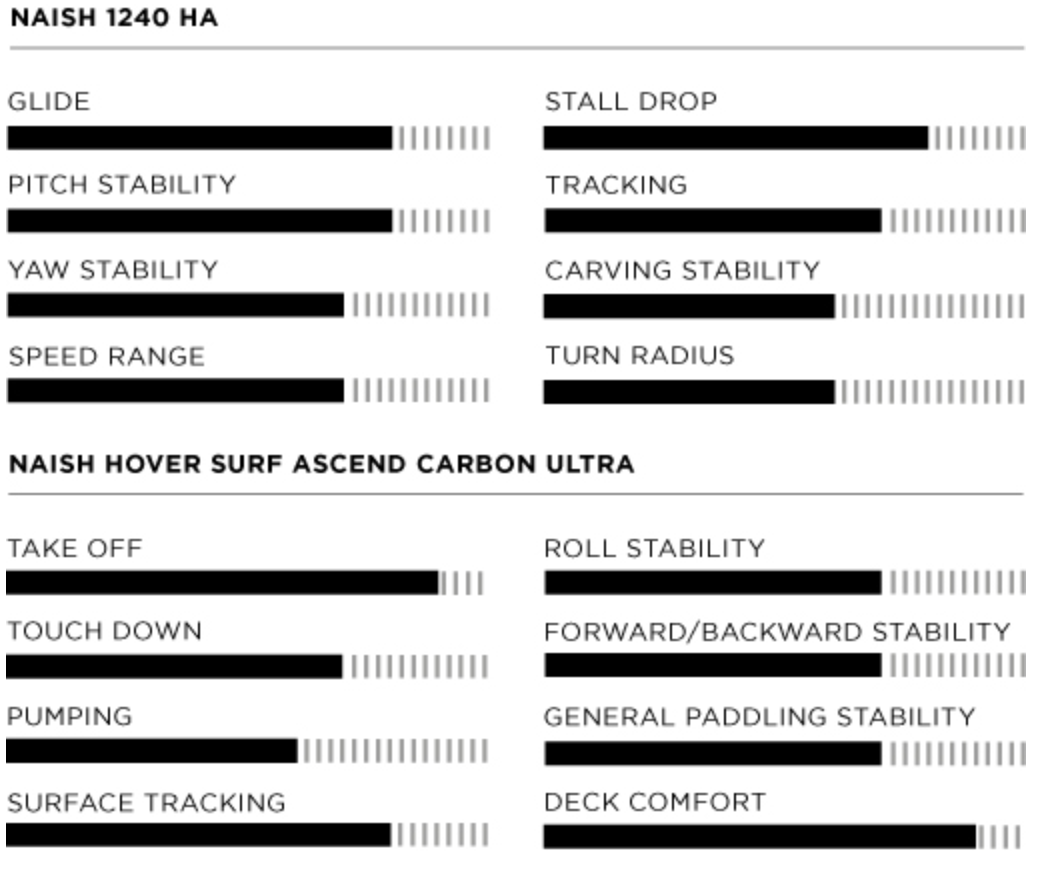