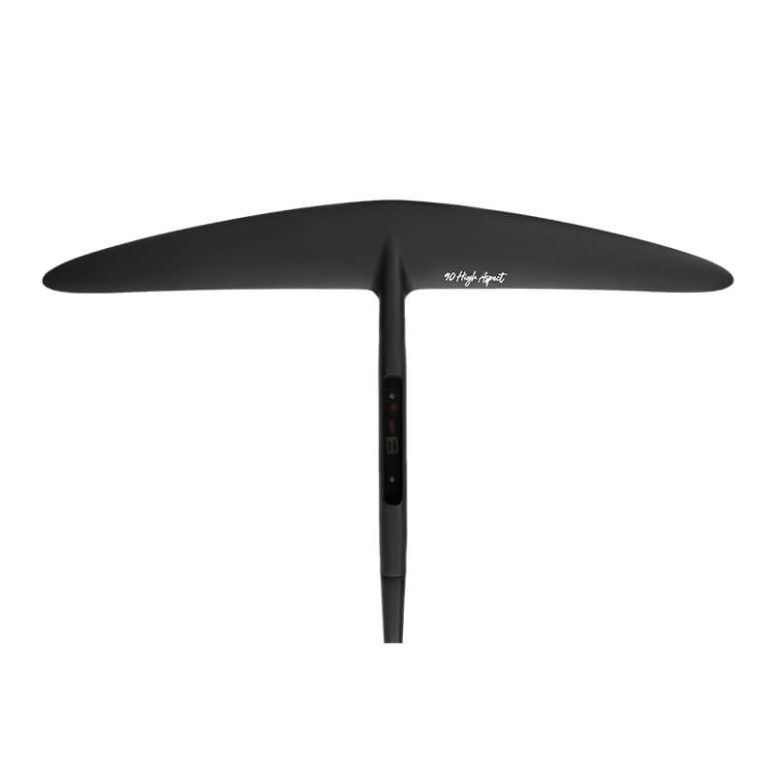 Lift are no strangers to pushing the boundaries in the realm of high aspect foils. Between the 170HA, 120HA, and now the 90HA, each has represented a jump in performance. If you’re considering a 90, it’s likely you’re already familiar with one of its larger siblings. With that in mind, I’ve tested the 90 back-to-back against a 120 to provide a better sense of how things have expanded. For a complete review of the 120, look back to Issue #8 where we published a Double Dip test alongside the 150 Surf v2.

Out of the bag, this 90sq/in (580sq/cm) wing feels as impressively small as the 120 did last year, proving that size is all relative! Its aspect ratio is quite literally dialed all the way to 11. Optionally paired with this foil are two brand new back wing options: the 26 Carve and 33 Carve, both of which I tested. Rounding it out, Lift sent me their middle-sized 32” mast. For good measure, I threw in my personal 25 Glide back wing as further comparison during testing. For context, I’m 70kg (154lb) and an experienced multi-disciplinary rider.

On the water, then. In spite of its size, this foil still retains what I think of as Lift’s “approachability factor,” essentially that the foil has good manners all around. It’s sophisticated. When winging or surfing, the 90 requires some degree of board speed prior to liftoff, but not substantially more than a 120. At lower speeds, the 90 holds itself up quite well before stalling, another great example of Lift foils’ mild manners. Stall speed is about average for a wing of this extra small size. For me, acceleration is the 90’s standout performance feature. With the right power, this foil is truly a slingshot with a highly impressive speed range. Stability at top speeds is excellent, even on the longer 32” mast where I’d expect to feel some wander as the foil undulates when passing swell lines. The 90 would clearly be an entertaining foil for towing into midsize surf. With an intuitive and highly responsive feel, carving is certainly a step up from the 120HA. Simply put, turning the 90 is more akin to telepathy than anything else. Wingtip ventilation is a non-event.

So, whether you’re winging, surfing, or downwinding (by various means), the 90 in itself is a guaranteed hit. What sort of hit you’ll get, though, depends on your back wing choice – and all three choices offer something a little different. The trusty 25 Glide is likely the fastest in a straight line, given its longer fuselage, smaller area, and overall lack of physical features. If racing or downwinding are your disciplines of choice, I’d suggest this one. Moving up, the 26 Carve feels very similar, but gives the foil an overall more “tail happy” feel. That is, rail to rail carving has slightly more flow. With a significantly shorter fuselage length compared to the 25, the 26 is slightly more pitch responsive. As for the 33 Carve, the jump in surface area is noticeable over the other two. Things are much more pitch and roll stable, and the whole foil carries further in glide. Paired with a 33 tail, the 90 setup is actually rather sedate for something so small. Cruising fast and far is a breeze. Sure, ripping a turn might require more force, but it’s a similar experience to the 26 when you get there. As I said before, it’s all a question of what flavor you’re looking for. If it were me, I’d have all three tails in my bag.

In summary, Lift’s 90 caters well to those more experienced foilers dabbling in a variety of disciplines. For most riders, I don’t suspect it will replace the 120, but it certainly adds a new level of performance if you’re looking to go fast, slash turns, and have fun on the water. KVS