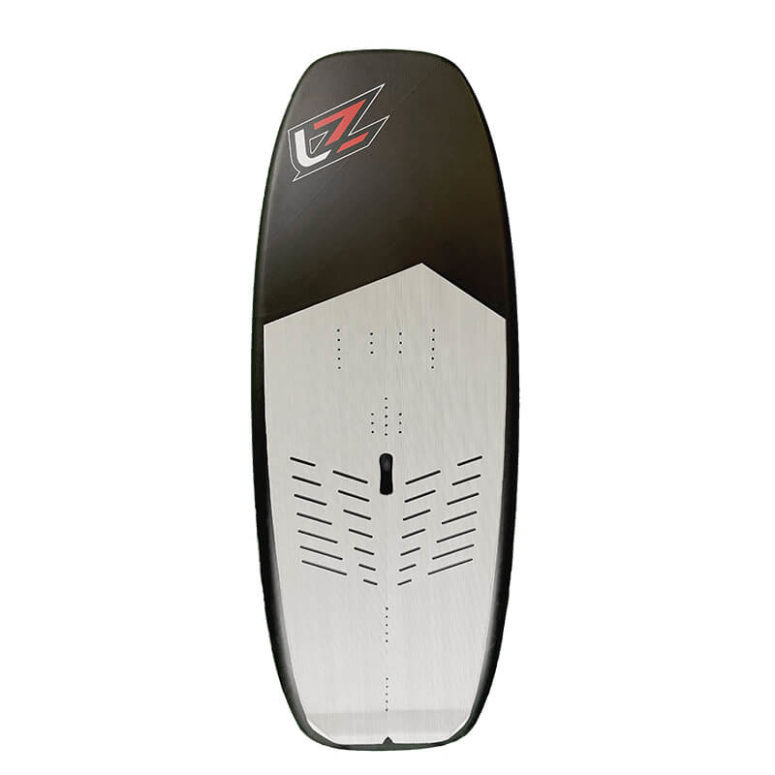 Austrian manufacturer Levitaz have been producing luxurious foil sports products for kite and surf use for a while now, and have recently entered the ever-expanding wing market with some higher aspect surf foils as well as some wing-specific boards with their all new Boom range, spanning from 48l sinkers all the way up to 108l novice volumes. In keeping with their proudly European origins for their foils, rather than outsource the manufacturing to Asia like many, Levitaz have utilized the Appletree production facility in Portugal to bring Alex Schwab’s shape to reality, minimizing transport miles to the European market and maximizing control over the quality. The manufacturing is flawlessly executed, and matches the equally impressive high-end carbon work of the Levitaz foils, to form a jaw-dropping all black carbon affair that will be the envy of other beach users. All the carbon work is proudly on display – there’s no spray job disguising the cloth lap on the rail, and the board is honed to a matte finish to complete the full stealth bomber styling. The outer layer of carbon is set at 45 degrees to the board’s length, meaning it will add dimensional stiffness to the composite layers, which is difficult to achieve neatly unless the board is vacuum infused.

In terms of shape it’s a relatively boxy plan form with a gentle taper into both the nose and tail; the four fairly distinct corners maximize the stability found in the 75l of waterproof foam. The rear section of the board is almost completely flat in rocker line with a simple, slightly smoothed 90-degree tail, which makes for a clean and instant release. The majority of the rocker is sculpted into the front half of the board, which runs from a slight single concave into a central spine and mid-depth double concave arrangement. Rails-wise, things are relatively boxy with a gentle radius taken off the top edge for comfortable handling. The micro corduroy EVA pad is asymmetrical which is definitely a stylish touch, and is grippy and luxurious underfoot without being too aggressive on bare feet or overly thick and dulling response from the foil. The standard 90mm foil box has quite a noticeably rear biased placement in context to the board yet feels perfectly balanced with the matching Levitaz HA foil system. The same goes for the handle placement, where the nose counterbalances the weight of the foil, making for a comfortable walk in through shore break.

For an average size rider the 75l Boom will most likely be their first stepdown from a full displacement board, and makes a solid argument for a practical partial sinker. Getting going is straight forward, and it’s noticeably stable during the transition from kneeling to standing. It builds speed and releases rapidly, and doesn’t suffer from a sticky front end as some double concave nosed boards have a tendency to. Touching down from both a breach or a jump, that nose seems to recover respectably and the even volume distribution means the board quickly builds speed again rather than bogging. The rear box position lends itself to faster power turns driving around your back leg, rather than tight yaw snaps. Foot strap insert placements are sensible, and between these and the long track box, there’s enough adjustability to use with different foil systems if required. For lighter humans the high-level surface stability of the shape means it could easily work as a first time board or floater setup for the slightly more windsports savvy beginner. The placement of the volume makes the Boom extremely simple to balance on, enabling its use in a wide range of wind and water conditions.

In this sizing, the Boom is a mid-size, mid-weight board with a decent level of agility. The manufacturing is second to none, and its feature-rich build is well considered and functional as well as an eye poppingly beautiful piece of carbon art, matching well with the Levitaz foil range. RB