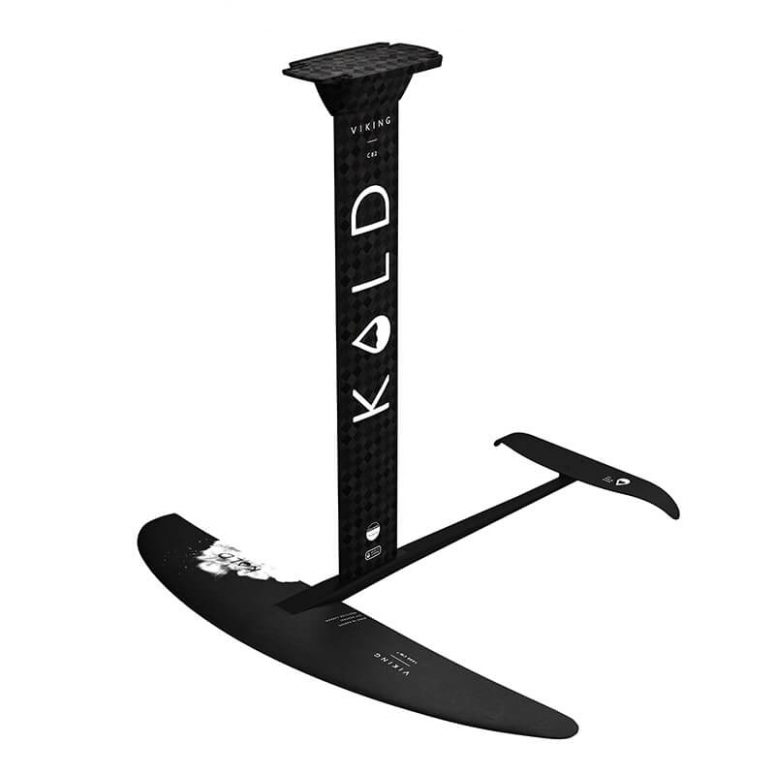 KOLD is the brand of German kitesurfing legend Mario Rodwald. At the core of the KOLD philosophy is sustainability and the brand strives to make gear with as small an environmental impact as possible. All of their boards and foils are produced in the EU, and they take steps to ensure that all carbon used in the production process is offset. This is 100% not ‘greenwashing’ and kudos to KOLD for placing environmental impact at the heart of the brand.

The Viking is KOLD’s first foray into the foil world, and they have arrived at a good time with the benefit of a few years of evolution of designs and with the arrival of winging on the scene. With this in mind the Viking is a relatively high aspect wing in keeping with the direction the world of wing foils is heading, but with a profile which suggests that this is more than a straight line glide machine. On test I had the 1680 wing and the 82cm carbon mast. The wings are created from ‘recycled carbon’ and are molded, they are light and feel sturdy without the brittleness of a full carbon lay-up. The foil ships with two fuselages (58cm and 72cm) and has a nifty system whereby you can switch the position for the mast in the fuselage to tailor it for surf or wing riding. I was particularly impressed with the mast, which is full carbon and feels very stiff and high end (there is also a cheaper aluminum option). Everything screws together with Torx bolts and is super sturdy. There are three shims provided, I did tinker with this and – for winging – felt that the +.05 provided the most balanced set up. Also provided are quality covers (with a zippable front cover) and a bag to keep the whole set up in.

On the water and I rode the Viking in a range of conditions from flatwater through to small waves and from 15-40 knots. With the 1680 wing you would expect the foil to lift early and it does, with a smooth and relatively leisurely lift. Once up, acceleration is swift and the foil feels stable as you generate speed and can find your balance and lock in. The Viking has a broad ‘sweet spot’ and feels comfortable cruising at lower or mid speeds, although as a 1680 it is not a speed demon and you would need to move down through the wing sizes if you wanted to get some more juice from it.

The standout feature for me was the pump and gliding capabilities of the Viking. I had several sessions in gusty offshore conditions with the wind fluctuating between 10-30 knots! In the lulls, you can comfortably pump the Viking for 100 meters with minimal effort and it glides beautifully. If you are pumping the wing to get going then the Viking gives a very satisfying forward ‘spurt’ once you get it out of the water and can engage a couple of quick pumps and you are off. Overall an impressive entry and a great ‘all round’ foil that will suit 90% of wingers…