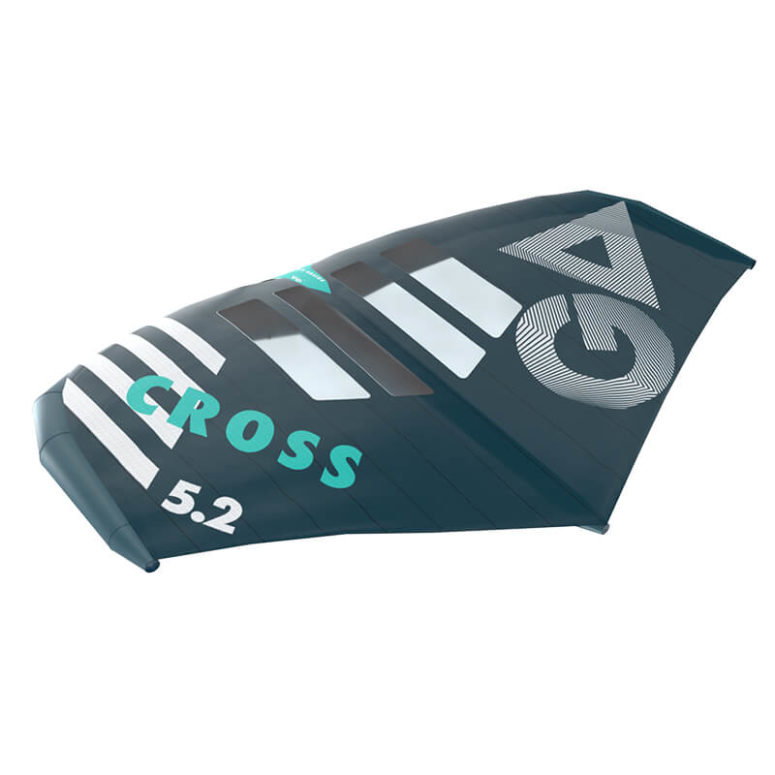 Last issue we had GA Foil’s second iteration of the Poison on test – this has more of a focus on the wave sector of the market. This time round we had the Cross – the do-it-all wing in GA Foil’s line up. A year is a long time in the world of winging as we know, and the new Cross has rolled with the times and there are several new and well considered features in evidence.

The Cross, as with the Poison, makes use of a new Dacron from Dimension in the leading edge and in the strut. As in the world of ‘kite’ construction, a huge area of competition now is in the world of materials, with the key terms of ‘stiff’ and ‘light being at the fore. With this in mind, the new Dacron increases the stiffness of the leading edge, while the use of triple ripstop gives the canopy strength and additional rigidity. A Kevlar line also runs along the trailing edge to increase the strength here and to minimise the need for heavier reinforcements. In another nod to weight reduction, the number of handles has been reduced to give the Cross an altogether lighter and more trimmed back feel compared to its predecessor. Inflation is via a one-pump system, and the Cross, unlike the Poison, has windows, with two placed either side of the centre strut.

The Cross is available in 6 sizes, ranging from 2.2 through to 6.2. We had the middle-of-the-range 5.2 on test. On the water and the Cross feels light and is easy to position to get you started. For flipping onto its front it is east to work your way around to the trimmed down tips, and for beginner wingers, this would be an easy introduction to the sport. Getting to your feet and getting going and the Cross proves itself to be a well-balanced wing with an impressive low end. We got the 5.2 going in light conditions and the low and end the pumpability ensured that with some aggressive pumping you got more than enough of an injection of power to get you going.

In terms of handling, the positioning of the handles is excellent and the front handle is wide enough to shift your hand around to adjust the amount of pull you receive here. The generous leading edge diameter ensures that the Cross is very stable once you are up and riding and there is no twitchiness of unexpected movement which will, again, appeal to the beginner/intermediate market..

For boosting you can generate a solid amount of power with the Cross and can keep loading it up. We thought that in the smaller sizes and with a good amount of wind, the power and stiffness would turn the Cross into a boosting machine. For flagging out the Cross behind you, it will do this, but is not as comfortable in this environment as the Poison. Overall we felt that the Cross was a very well-considered evolution of its predecessor which knows its target market and meets the need of this perfectly. AH