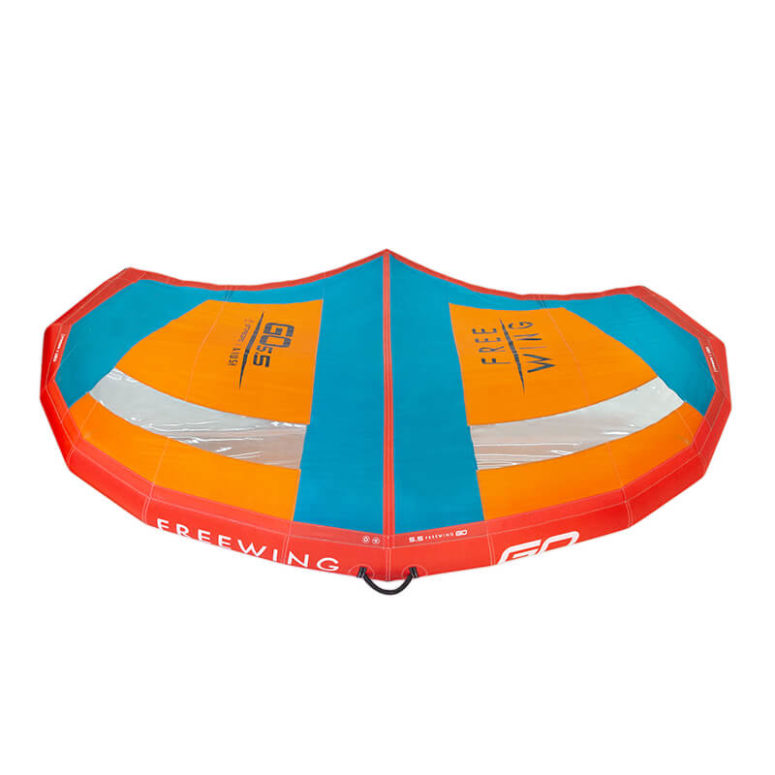 The collaboration between Airush and Starboard with the FreeWing product range has undoubtedly been a successful one, with their two versions both keeping up well with market trends and providing a solid platform for beginners and advanced riders alike. This year the range has been extended into the entry-level sector with the release of the FreeWing Go, which comes in at a seriously competitive price point from a major manufacturer.

So where have the savings been made, I hear you ask? The first thing you’ll notice is the relative simplicity of the design, which comprises of less paneling in the canopy and less segmentation in the leading edge than the flagship models, but seems to take some inspiration from the shape of its more expensive bigger brother in the bigger sizes. The large arced windows are made from a pliable clear PU material which beads water well, provides a decent level of vision, and doesn’t mind being crumpled up so you can bundle it in the one-size-fits-all, twin-strap backpack with no worries. On the trailing edge there’s some darting between each canopy segment, which is a nod towards longevity in this high-wear area. There’s two separate screw-in inflation points for the strut and front tube. The inflation pressures are relatively low at 6PSI, with the high diameters of the tubes providing the structure rather than pressure. Beginner-friendly Y-shaped cross straps are present, linking the strut and leading edge tube at 45 degrees. This adds more airframe stiffness to this area, which is noticeable when you inflate. The strut has two long handles that are intelligently placed and balanced to hold, proving easy to slide up and down to micro trim. Behind the strut, a mid-depth profile blends in with the big leading edge diameters, and the wing remains fairly flat with a hint of dihedral to maximize its power per size. On the nose, the front handle is a sensible width and reassuringly stiff, allowing a good level of twist control which is important as a beginner will be using it frequently. A bungeed Dyneema clip-on waist leash is supplied with a stainless swivel incorporated; again this is focusing on ease-of-use and flipping the wing.

In the hands it’s powerful and grunty per size. The squat low-aspect shape promotes stability and super easy handling with the long main strut extending the surface area of the canopy to the rear. This means that the tips rarely drag in the water, which can be the number one challenge a beginner faces with a board on the surface. In fact, it’s grunty enough to pull you along admirably on a non-foiling board. On the foil, the ease of handling really shines when going around your transitions. From a range perspective, it holds its shape well once things get overpowered and is easy to depower.

FreeWing have produced an aggressively priced and functional product that does a great job of getting people on the foil quickly and with as little fuss as possible. It’s easily one of the most beginner-focused designs we’ve seen so far that extends its repertoire elegantly into intermediate use, with the 4.5m working admirably well luffed in waves. It would be ideal to run as a robust lower-cost option in a school or center with backing by an established dealer network, which, unlike some of the direct brands, will allow for demos and a decent level of after care for spares and warranty. It’s also an intelligent move for a SUP brand like Starboard to penetrate the non-foiling wing market with a reasonably priced and solid add-on accessory that works well with their standard SUP range. RB