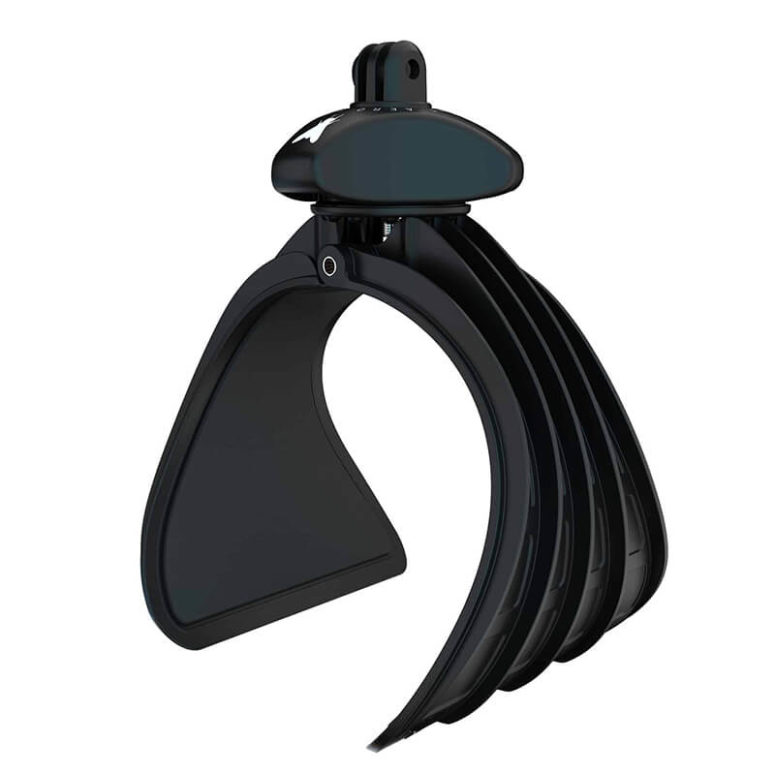 The conundrum of sensibly attaching an action camera to an inflatable wing has only recently manifested itself. Personally, I’ve made various cobbled efforts, some from rudimentary clamps and other GoPro mounts, bits of string and Velcro; even a batten from an old catamaran sail has been employed. It’s safe to say there’s been some mixed results and some expensive electronic casualties along the way, particularly when larger waves come into the picture, which annoyingly is when your footage is probably going to be most dramatic and interesting.

It was high time someone got on top of the problem, and Flymount have answered with the UK manufactured Aero 130. The 130 signifies the maximum mounting range in mm, which starts at 80mm. Out of the box, it feels extremely light, weighing in at 140g, which is slightly less than a GoPro 10, making our entire camera rig a slimline 300g. The bulk of the structure is made from an injection molded, glass-reinforced nylon dubbed Akulon, which is extremely tough and allows a little flexibility to the jaws. Marine-grade stainless parts have been employed for the mechanism, which after three months use and abuse show zero signs of deterioration.

Fitting the clamp to the wing is extremely easy – simply choose your position and spin the ergonomically designed knob under the mount clockwise until it starts to put pressure on the wing’s tube and once the jaws of the clamp reach a comfortable tension the camera mount locks into place. If you need to angle the camera, simply slacken it off a little, rotate, and retighten to get your desired perspective. This can be performed with the camera pre-loaded in the mount. The large jaws of the clamp make it a reassuringly solid connection on the inflatable tube, and it seems to augment itself well to the shape of the tube, even if there’s some taper in the diameter at that chosen point. EVA pads provide a decent level of protection against the inflatable tube, and all edges of the jaws are rounded off and create no abrasion.

We fitted the Flymount to both the wingtip and tail end of the strut with great results. The GoPro 10 with the Max lens mod with horizon correction produced some very smooth and watchable footage from both these perspectives; we’ve also seen some equally impressive results with the GoPro Max.

An orange failsafe cord is provided which is designed to loop around the base of the camera and then through the aperture in the hinge of the clamp to get it out of the photo. This can then run along to a secure point on your wing, such as the front handle or pump leash point. If it does manage to let go, it will be easy enough to recover, and you won’t lose your £500 camera in the drink. We also employed the GoPro ‘Floaty’ case which provides some impact protection as well as keeping everything buoyant if the proverbial does hit the fan.

The Flymount Aero 130 is an impressive design response to a very specific and complex problem. It’s detailed, robust and very effective at getting you superb winging shots, ideal for shameless self-promotion or video coaching. We took it out in some chunky waves and got some serious washings, and where action cameras would have previously been donated to Neptune, the Flymount held out and that’s testament enough to its successful design. RB