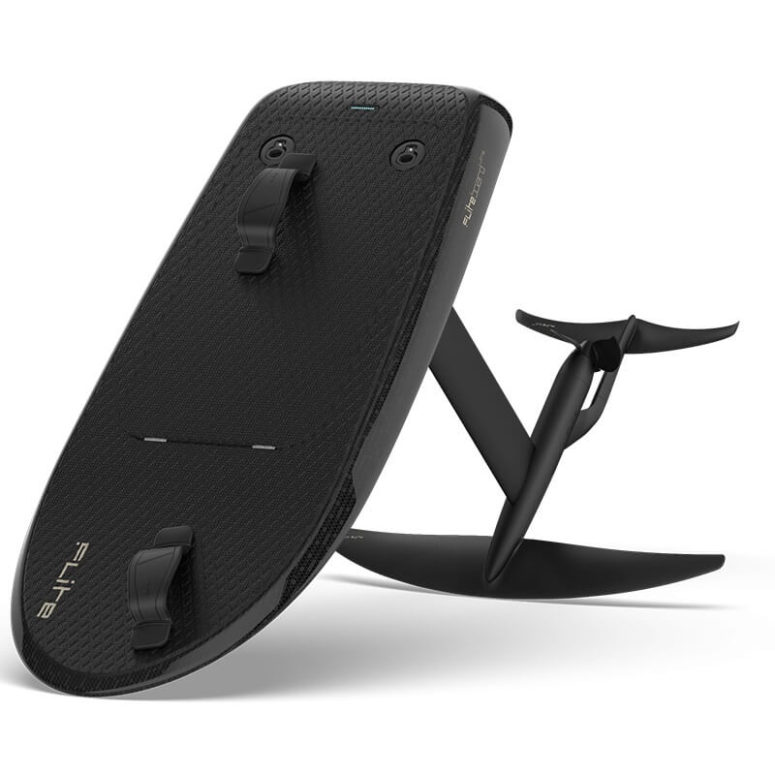 Products stand out when they’re developed by teams with sophisticated, design-based approaches — it’s that simple — and the Fliteboard Ultra is one such piece of kit. When I had the opportunity to spend a weekend testing an Ultra shortly after its release, I could hardly wait. My prior experience with the Fliteboard Pro (see Issue 5) exceeded my expectations and gave me a glimpse of the future in high-performance e-foiling. Released amid a lineup-wide update dubbed the “Series 2,” the Ultra is an entirely new model that benefits from Fliteboard’s most recent hardware and software improvements. Major changes from Series 1 include an entirely new, radically designed set of wing options, the TrueGlide prop, and a redesigned throttle-arming process. Let’s dig in.

First up, Fliteboard’s 10 new wings on offer. As excited as I am about the Ultra board, these four wing families immediately had me dreaming of new speeds, riding styles, and opportunities to get creative on the water. Tested were the Flow 1100 and Race 700. In brief, the 1100 is versatile, feeling stable when centered and responsive when pushed in a carve. It pairs rather magnificently with the Ultra, whose small size compliments this wing’s loose, fun feel. The Flow 1100 definitely brings that surf style to more accessible speeds, making it an excellent entry point for riders looking to get creative. Paired with the Flow 245 stabilizer, this setup proved an excellent launch point for me to get familiarized with the Ultra. After day one on the Flow, I could hardly wait to move on to the Race 700, which had captured my imagination since first laying eyes on its spec sheet. In a rather perfect stroke of luck, my test spot for the Race wing turned out to be empty and glassy, with long stretches of clean water in which to give it a proper rip. As expected, this wing provides relatively low lift on takeoff, and requires a steady technique to get up and flying efficiently. After that, it’s truly as close to an unpowered foil as I’ve felt to date. Pitch reactivity, roll rate, and overall responsiveness — not to mention glide — are truly phenomenal. Paired with the thin, flexible Race 200 stabilizer, the combination is a mind-blowing ride. With the throttle pegged at setting 19, I managed nearly 48kph/29mph without breaking a sweat. The setup’s stability at speed was confidence inspiring, and I could hardly get enough while I zipped around standing and sitting for nearly 90 minutes. I could see myself exclusively taking out the Ultra with the Race wing — it’s just that good!

Moving on to other noteworthy features, the TrueGlide prop is an exciting element. Granted, while I didn’t get to test it much due to a lack of sizable surf, I began to scratch the surface of what a free-spinning prop can offer. Broadly, this design allows the rider to let off the throttle when riding a wave, and have the prop automatically windmill in the stream. While the feeling of drag is still somewhat noticeable, it’s quite close to the sensation of surfing an unpowered foil, but with the benefit of powering back up on demand. I recommend watching Keahi de Aboitiz’s video in which he demos the TrueGlide prop in Hawaii. New for the Series 2 is a revised throttle arming system, which I particularly enjoyed after having lived with the Series 1 Pro. Now, rather than touching the control unit to the board deck in order to arm the throttle, a simple button tap and throttle squeeze are all that’s required. Especially with the small size and low volume of the Ultra, this makes getting up and going an easier, quicker process. These are just some of the features that make Fliteboard’s latest update so exciting.

The tested Ultra board was finished in a silver top coat and clear carbon underside. Fitting for the price tag, Ultra’s quality is second to none. It’s truly a functional work of art. The double concave through the bottom definitely does its job when touching down at speed. For being so small, the Ultra skips off the surface beautifully, even when in a steep turn. Throughout my two days of testing, I never fell due to the board sticking to the surface. For those trying to pick between an Ultra and a Pro, the primary concern is that the Ultra may be “too small” for certain riders — and I think this is certainly true for absolute beginners, or for less than advanced riders pushing past 200lbs/90kg. In those cases, a Pro or Fliteboard would be a better choice to build experience on. For anyone else, I encourage considering an Ultra.

In all, the new Fliteboard Ultra is a wicked piece of kit. As a die-hard prone foil surfer that shaves ounces off his personal setups, I had high expectations when first hearing about this new foilboard. After spending numerous hours with it in a variety of conditions, I can safely say that those expectations were truly met…