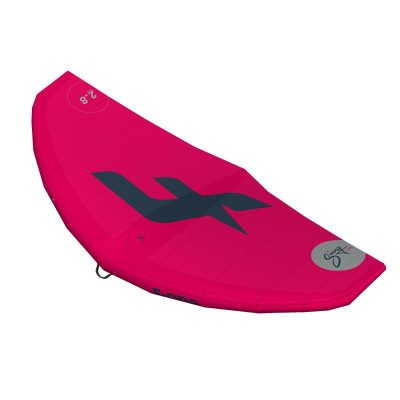 The F-ONE Swing is the first inflatable surf wing from the well renowned French kite surf brand. The owner, Raphaël Salles, was sold on the concept after smuggling some prototypes on his family holiday to Corsica, where he would normally be landlocked on its rocky shores, with bad access and crowded beaches unsuitable for kitesurfing. With the Swing, he could launch off a pontoon and limp out into the wind blowing tantalizingly down the strait and blast around on his foil all afternoon. F-ONE now are now leading the way in terms of quality wing video content with a constant stream of impressive clips rolling out from their team. In terms of construction, in the current marketplace the Swing is relatively minimalist and lightweight in design. There are the essential control handles elegantly placed exactly where you need them, with three on the strut and one on the leading edge. The whole canopy of the sail is two core Teijin D2 ripstop, along with Teijin Dacron for the front tube and strut. There are no battens present in the sail at all, meaning a nice small pack down size. There’s also some subtle, well placed protection on the wingtips to cover potential scuff points. F-ONE quote an approximate wind range of 15 knots per size, which from our testing we’ve found a realistic figure. There are six sizes available starting at 2.2m through to 6.0m. The leading edge diameter is noticeably large, particularly if you’re used to looking at a kite, as the rigidity achieved here is essential to maintaining the wing shape and producing power. The wingtips taper off towards their ends and maintain a decent level of leech tension, minimizing flapping if the sail is engaged, even when extremely wet. The connection between the strut and the canopy is flexible and dynamic, and comprises of a piece of profiled ripstop allowing the sail to luff and breathe a little, enhancing gust resistance. This added canopy depth also allows plenty of grunt for getting up on the foil nice and early. The profiled section of canopy is deep in the center and flattens out towards the wingtips offering further stability and balance. There’s also a neoprene knuckle guard on the leading edge handle which stops your fingers being gently eroded by the Dacron, a luxury touch and no mistake.

The thought and the attention to detail, particularly on weight saving, means that the Swing is a wonderfully agile wing in the hands. Compared to heavier offerings on the market, there’s a high degree of balance and control to the wing, and absolutely no rocking sensation when on the front handle. This is most noticeable in a wave situation where you can literally leave it in the neutral position with one hand on the leading edge handle. The Swing flies itself immaculately when disengaged, allowing you to head straight into the wind using the power of the wave with little resistance. The deep profile also means a nice, grunty power delivery when required, and an excellent ‘wobble free’ depower ability, particularly noticeable at the top of the wind range. The lack of handle choice eliminates any fumbling and catching the wrong handle, which can make or break the success of a maneuver, and the light weight also means when you’re in the beginner stages and catching the wingtips and having to right them, the Swing is very easy to flip over in the water from the center, without having to work your way down to the wingtip.

Wing surfing is a sport in its infancy and it’s fascinating to see the different design directions the manufacturers are taking. With F-ONE, the Swing is an exercise in simplicity and concise, functional design. There’s nothing unnecessary here, just a very stable, highly usable lightweight surf wing which is useable in all conditions and excels in the waves. Definitely right at the pinnacle of wing products currently available.