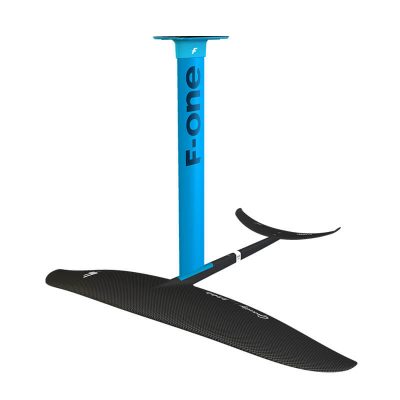 The Gravity range is a well-established carbon wing system for F-ONE, who have been producing a mixed materials modular hydrofoil system for kiting for several years now. It centers around a lightweight and lean aluminum mast system that has a favorable stiffness to weight ratio, and the best part is it all transfers over cross discipline, so you can use the same pedestal and mast for your kite foil, all the parts are interchangeable. The Titan foot plate slots in to the bottom of the mast and accommodates the larger carbon SUP and surf wing fuselage that neatly breaks in half at 45 degrees between the tail section and the front wing. It’s a unique design which eliminates the need for bolts to hold the front wing to the fuselage and maintains a completely drag free connection and zero flex in the front wing joint. Quite ingenious.

All the fittings are lightweight M6 torx, including the pedestal, and the machining and fit is flawless. The pre-preg carbon is light weight and exceptionally tough. We witnessed this first hand at their dealer meeting, with the kit bouncing off rock and reef regularly and surviving well. It will scratch, but not break up or delaminate. The C300 stabilizer can be paired with the entire range of Gravity front wings from 1200 to 2200cm2 and some of the kite foils. Pre-preg carbon masts are due to be released soon, we’ve had a preview and you won’t be disappointed.

The Gravity 2200 wing is the largest in the F-ONE range, and aims for heavier riders, early lift and easy pumping. It’s got a massive span and a high aspect ratio at 5.5. Although it’s somehow packing 2200cm2 of area, its relatively lean profile means it’s still got some serious performance, and is perhaps more versatile than you think.

As you would expect, it takes off very early but manages to maintain a decent speed range and simply won’t top out and get noisy or unstable; it seems to reach terminal velocity and stay there in a well behaved fashion. When coupled with a larger mast, it makes choppy European wave conditions very entertaining indeed. You can literally pick up a ripple with this thing and ride it as far as you like. The large span obviously means you need to be realistic about how pivotal a turn you can make at speed but for the most part this front wing will take most riders well past being an intermediate whether propelled by a wave or a surf wing.

For heavier humans, it has a far wider application than initially expected and has become a bit of a go-to wing if the conditions are light or fickle, as with gusty wind and weak swell keeping on the foil is the aim of the game. For a large percentage of riders, the appeal of foiling is getting out on the water in conditions you normally wouldn’t bother with, and the 2200 extends that range of use further than imagined. Surf even smaller waves, or wing surf in very light wind conditions with a feeling of serious, albatross-like gliding efficiency.