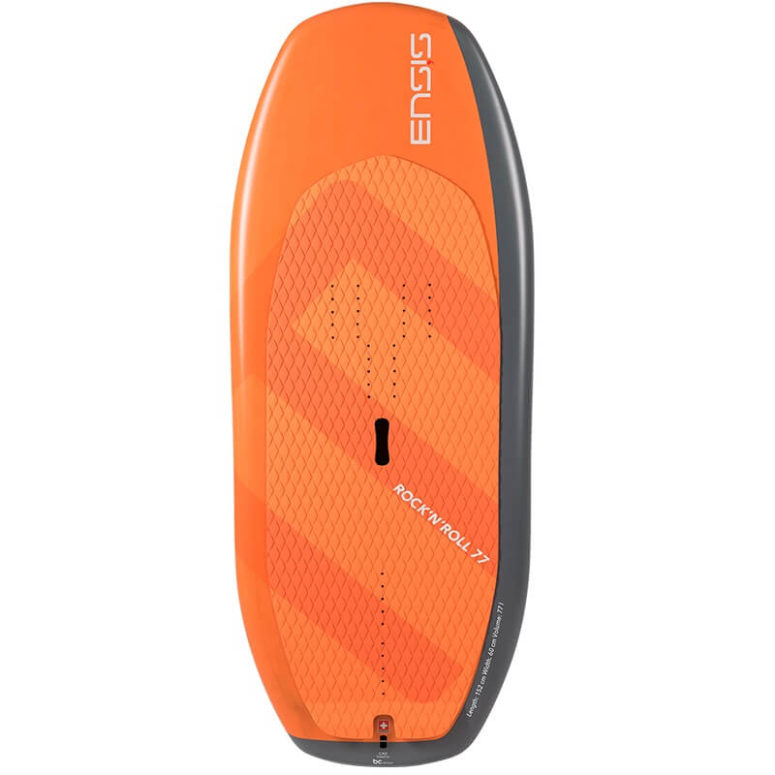 Ensis is a brand that has sprung up from the cradle of the wing revolution from somewhere deep in the Swiss alps. Their team rider Balz (pronounced balls) Müller is an established freestyle windsurf pioneer, and has taken to the inflatable sail and foil like a duck to the proverbial water, placing high on the podium of the first few wingfoiling events that have taken place in the last couple of pandemic ravaged years. He’s inventing tricks on the fly and is making a great job of getting the Ensis brand noticed.

The ROCK n ROLL comes in a range of four sizes spanning 57 to 117 liters. We were given the 97 liter board which is their universal does-it-all design which sat at a comfortable seven liters over my bodyweight, maximizing its light wind potential. 5’2 is a short board to cram 97 liters into and it certainly looks and feels compact. It’s a carbon sandwich production with a brushed finish and has a general feeling of solidity in the hands and underfoot. A large carry handle in the underside is going to make negotiating a rocky beach or shorebreak a trouble-free experience. The EVA deck pad spans the board comprehensively and provides limpet like grip and a little cushioning on impact. A delightfully tailored board bag is available as a must have extra.

The generous number of foot strap inserts combined with the foil position on the tail-biased tracks provided enough tunability to get things set comfortably with a minimum of experimentation whilst fitting a couple of different cross brand foil systems. You can line up a two or three strap layout with ease. The standout hourglass outline shape is something that perhaps crosses over from the SUP market, with those four corners of bulge in the smoothly beveled rails creating four points of stability and that’s evident as soon as you get your weight over the board. Particularly noticeable in choppy water and in the roll axis, it has bags of stability even when almost static.

The twin hull concaves and associated spine are quite pronounced and create an aggressive rocker particularly running into the nose. This strikes a decent balance between relatively early planing and taking a hard, nose heavy landing well, which is a property that a board clearly influenced by Balz Müller’s style is bound to adopt. The slap of coming in hot is very much minimized compared to a flatter setup.

With the sport’s focus very much taking to the air of late, it’s inevitable we would have some freestyle-oriented designs appear, and that’s where the ROCK n ROLL is leaning. Even at 97 liters, realistically it’s a strap-focused board which is big enough for most to learn on from the ground up, and will provide the perfect platform to get your first pop and jumps. Most of all, the landings it provides will be as forgiving as possible, and the chances of getting bogged minimalized. The ROCK n ROLL is an orange lozenge of freestyle wing-propelled fun, and could be your pathway of least resistance to getting airborne in wingfoiling.