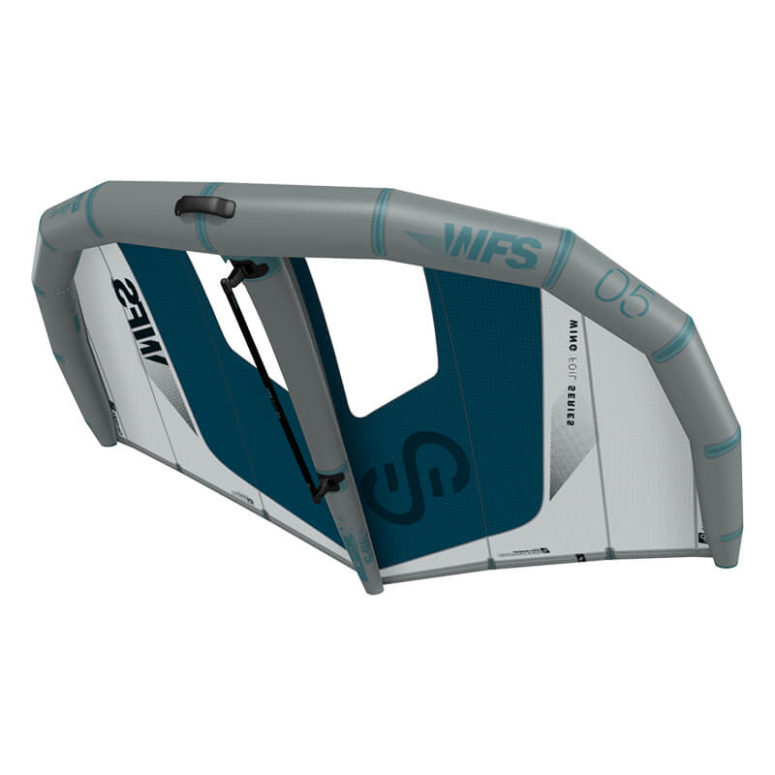 With a highly experienced team of designers and passionate watersports men and women, Eleveight have grown into a well-respected force within the world of kitesurfing. With a reputation for solid products and for growing the brand and product line up at a sustainable pace they – as with many other kite brands – have now turned their experience and knowledge to the world of wings. The WFS (Wing Foil Series) is now on to its second version. This is not an ‘off the peg’ creation, and has some innovative features unique to their wing. A lot of the team are based in Portugal and much of the testing takes place in the gnarly conditions that Europe’s exposed Atlantic coast is renowned for.

The WFS is a compact freeride wing aimed to suit any foiler who wants a solid wing that can handle everything that you can throw at it. Featuring a thick segmented leading edge and profile, combined with a triple teijin canopy and a super compact dihedral V shape, the WFS has a very rigid frame and impressive tension in the canopy. This is coupled with a wishbone instead of handles on the V1 version. There are two windows ideally positioned to give a good view of what happens downwind but small enough to not compromise the overall rigidity of the wing. It is very fast to pump up, and the specific design of the bag helps storing it. Instead of a kite-style backpack the bag is looking much more like a windsurf sail bag to reduce your frustrated efforts to persuade it into the bag, and to ensure that the CS Wing Bar fits in comfortably.

On the water the WFS is a little bit heavier than some 4m wings due to the boom and windows panels, but the extra precision added by the boom makes the wing extremely reactive and easy to maneuver which – we would say – compensates for the extra weight. The WFS V2 is very powerful with an impressive low end, and has a direct feeling that will potentially allow you to downsize your wing compared to less stiff and responsive wings. We were happy on the 4m where other riders were out on 5 and 5.5M wings.

With its stiff handling, the CS Wing Bar gives a comfortable extra amount of power for take off if you are heading above-the-lip, and will also ease your transitions to give you more change of staying on the foil. The boom is shorter than some but we found that this made it super intuitive and you easily find your hand position. It also has an instant torque feedback compared to other wings, and gives the feeling of holding a windsurf sail. It is a bit more physical than other wings because of its profile and can be hard on your arms getting very close to the wind, but if you want a truly connected feel to the wing, then this is a great option.

Pushing forward in the wind the WFS will give you this extra amount of trust needed when attacking a bump or a wave, and once flagged out it remains very stable. For wave riding the boom allows you to move the wing very quickly around your body and when it is time to move from ‘wave’ to ‘wing’ power it is so much easier grabbing the boom versus trying to find a smaller handle. To summarize, the WFS V2 is a stiff, maneuverable, and powerful wing and a great example of a well thought out and executed ‘boomed’ wing. AH