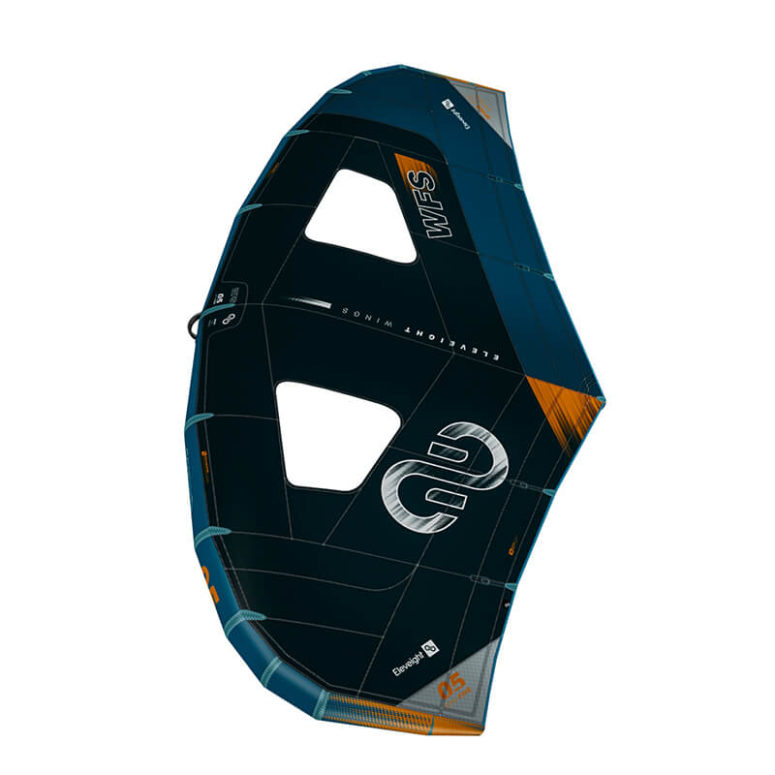 For a brand who came to the wing game a little later than many other brands with a windsport heritage, it’s fair to say that Eleveight have been making up for lost time! They are onto version three of their WFS wing already, with tweaks and refinements being the order of the day rather than any ground up rebuilds. The wing’s philosophy is very much in the freeride realm with the aim being an accessible wing that will work well for you whether you are jumping, riding in the waves, or just cruising around freeride-style.

The WFS V3 makes use of x4 Ripstop which adds a little extra stiffness to the canopy, and also provides some extra strength if the worst should happen and ‘foil meets wing’. It’s never going to be pretty, but with x4 Ripstop to strengthen things, it shouldn’t be as bad… Beyond this, the construction of the WFS V3 is sturdy without being heavy. Eleveight have been working on their kite construction for many years and that’s evident here, with well-placed reinforcements, mid-sized LE and struts and an overall refined look and feel to the wing.

As the handles vs. bar system rumbles on, Eleveight have (as with the WFS V2) now gone all-in on the bar side of the debate. The bar is around ¾ length of the strut and is held securely in a webbed structure and then locked in using Velcro. After the bar ends, the center strut then bends slightly inward, which stiffens the leech of the wing and contributes to an overall super stiff feeling wing. If you want to take the bar out then this is easy, but the wing fits into its perfectly proportioned rectangular bag with zero hassle or re-rolling required. Other brands take note!

On the water and the WFS V3 provides a decent amount of low-end, but it is the rigidity of the wing that is immediately evident. For pumping, this equates to immediate power and feedback from the wing and you can quickly generate power without any significant flex in the struts and with the trailing edge remaining flutter free. It has a nicely refined feeling to it. For freeriding, the wing is well-balanced and intuitive to fly. It would be fine for a beginner but we would say that an intermediate+ rider would really appreciate the more subtle performance characteristics. If you want to turn on the speed then the WFS V3 is keen for that, and we made some great upwind angles and felt that you could squeeze an extra couple of knots out of it than most other ‘all round’ wings.

The bar is well placed and provides all the range of movement that you need. It has a comfortable EVA grip where your hands go, with a spongier section in the middle which you may grab onto during transitions or one-handed handling – we found this to be a nice feature as it gives you a tactile sense of where your hand is without having to look at the bar.

For wave riding, or just for flagging out the wing to put in a bit of pumping practice, the WFS V3 is super-stable and behaves very well. It hasn’t got heaps of dihedral but this doesn’t seem to impact its stability. Overall, we felt that the WFS V3 is a great example of a brand finding a design they like and then working hard to improve it. A great option for riders who want an accessible wing, but one which also has some additional performance tucked away for when they need it… AH