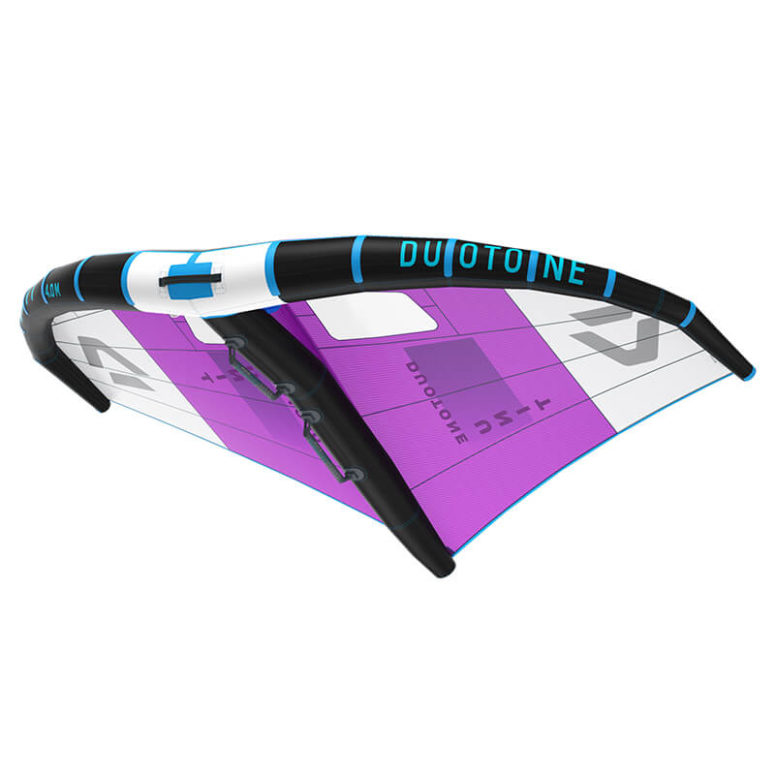 Duotone have produced a comprehensive range of wings since the early days of the discipline, the majority of which have sported a windsurf style boom interface, with the exception of the previous Unit which had soft EVA foam handles. This year they’ve fused both concepts into a wing with short handles promising to retain that direct feel, but also keep the wing light and maneuverable enough to step up its wave performance. We were intrigued to test it.

From a design perspective there has been a major overhaul on the shape, which aesthetically is far more elegant. Dihedral has been increased, with a more pronounced taper out into a thinner and more aerodynamic wingtip and a marked increase in leading edge segmentation to accurately control the shape. The panel layout has also been refined with extra seams and panels to distribute better in high load areas and minimize any elongation in the ripstop from long-term use. Two mid-sized windows are present giving decent forward vision and are made from a flexible lightweight PU material. On inflation, the canopy is noticeably tight and pre-loaded with tension. Two small rigid battens nestle into pockets on the trailing edge for flutter control in key areas. Most of the wing’s profile is built into the strut which has a pronounced bend in the mid section, with only a relatively small ripstop section to the rear of the front handle, keeping this very direct.

Carried over from their well proven kite range, the leading edge includes raised blue bumper protection over every segment join to avoid any abrasion on the stitching. Also familiar to any kiters will be the Airport valve system which is compatible with most traditional kite pumps. A dump valve sits in the inside of the wingtip for easy deflation and rolling. The handles have quite a generous diameter and oval-shaped grip, which fits the hands well. They have enough span to trim along and find your comfortable position, which you subconsciously start doing to adjust between upwind and downwind riding. They screw on and off, hinting at the potential of future proofing, easy replacement or upgradability.

In the hands, the combination of the rigid handles and tight canopy makes for a very positive and grunty experience, and it is super easy to pump and get on foil, with the wing certainly feeling powerful per size. The tight nature of the wing gives it a decent upwind ability and it doesn’t seem to get backwinded too easily. The enhanced dihedral helps its wave performance no end and makes for a simple water start with a low volume board. Compared to the fairly compact Slick, the Unit has a little more span and taper to the wingtip, which stabilizes the wing more effectively when luffed and in turn gives it plenty of positive lift when jumping. The other benefit of the handles is the one-handed control – you can use the front strut handle to stabilize the wing in a light wind or onshore situation to luff the wind with support and keep it out of your vision.

From a practicality perspective, the Unit packs down well into a backpack with two shoulder straps making it super easy to carry, which is a huge step up in practicality from some of the previous Duotone wings which were in windsurf style tubes.

The latest incarnation of the Unit is the most accomplished model from Duotone so far, and makes a solid argument for the rigid handles lending itself to an all round rider who’s going to experiment with straps and boosting as well as wave play. The elaborate and detailed build stands out against some of its contemporaries, and the crossover and appeal for those with windsurf experience still remains. Excitingly, a D/LAB version is available with ALUULA tubes, which will no doubt make the Unit even lighter and razor sharp. RB