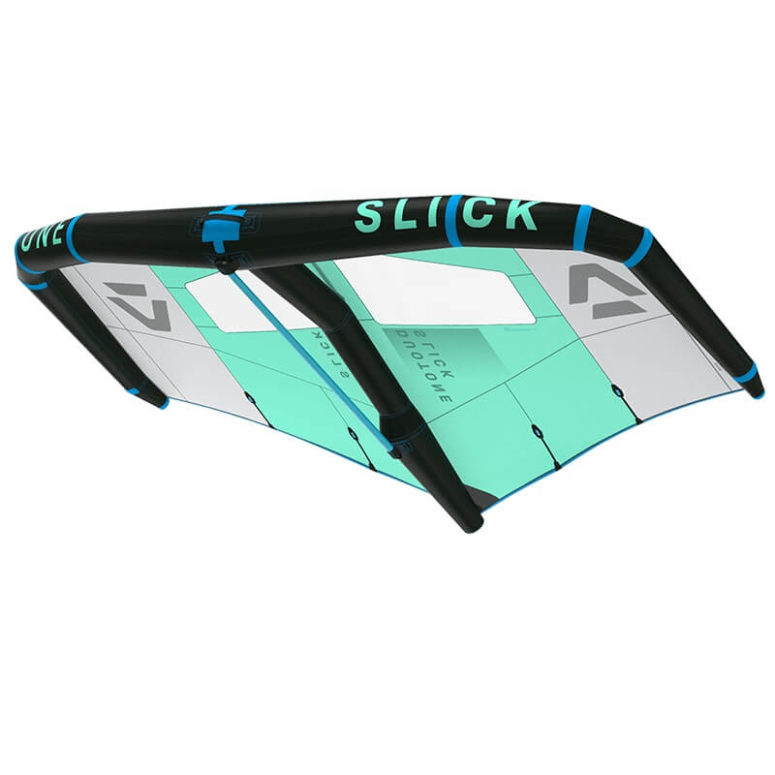 As one of the most well established (and biggest) kite brands on the market, it was little surprise to see Duotone ‘on it’ when the wing scene landed. They hedged their bets on the ‘boom’ concept and went hard out on developing a range of wings with the boom at the core. For ‘Gen 1’ wings they were good, but they were out on something of a limb, with most other brands opting for the center strut and with the boom dividing opinion, but with a solid fanbase nonetheless. Duotone followed with the Unit, with an inflatable center strut, a lower profle and with more of a focus on waves. So now – with the two main bases covered – a third wing has arrived: the Slick. This has a ‘mini boom’ which runs roughly 2/3 the length of the chord of the wing before slotting into a pocket which sits on the end of a coned section which tapers out towards the trailing edge. So it’s a kind of hybrid inflatable/boom wing. Yes, there is quite a lot of engineering that has gone into this.

Aside from the boom, the expected Duotone construction materials are there and the Duotone inflation system (make sure you have the correct diameter hose for that) works well. The Slick is a boxier wing with a narrow span and tucked in tips and with the width of the leading edge carried through to the wingtips. For the boom you can choose between a ‘standard’ and a ‘carbon’ boom. We had the standard on test.

Getting the wing prepared is relatively straightforward – the boom sits in the strut pocket and is then attached into a second pocket and secured by a Velcro strap with two tabs. It feels solid. Our biggest gripe with the Slick was that if you are relatively lazy (which we are) and you leave the boom on the wing then roll it up, it does not fit completely in the bag with around 1/3 of it hanging out the end. A bigger, longer bag would – in our opinion – be a better option, with the provided bag being a good option for packing the wing down or traveling. But you don’t buy a wing for a bag and so…

On the water the Slick immediately felt different to pretty much every wing we have tested. There is only one word to truly capture the essence of the Slick and that is: rigid. It feels similar to a windsurf sail. This level of rigidity results in a massively tuned in experience where you can really tweak and adjust the wing and the power is truly ‘on/off’. It’s the first wing we have ridden that has zero flutter and – even horrifically overpowered (we had the 4.5m out in 40 knots) – the winging experience feels much more relaxed and in control without the flapping of a trailing edge.

Getting started and the Slick is a pump machine and you can generate a lot of power and forward propulsion to get going, as well as being able to quickly do three or four pumps if you hit a lull without having to fully sheet in and out – more like pumping the sail on a dinghy. The result of this excellent behavior at both top and bottom end meant that we found ourselves opting to take the 4.5 Slick on sessions where we would have previously taken a 5.5m or a 6.5m… It’s almost a one wing quiver if your budget is stretched.

Of course there will be those who don’t dig the boom, we liked it and found it gave a nice ‘locked in’ feeling, as well as being good for transitions as you have more to aim for but – of course – it adds a chunk of weight so for trailing the wing behind the Slick is not as nimble as others.

For us though, any negatives were easily outweighed by the fact that the Slick simply feels like a different breed of super-rigid wings, and the versatility and responsiveness made winging slicker, easier, and more enjoyable…