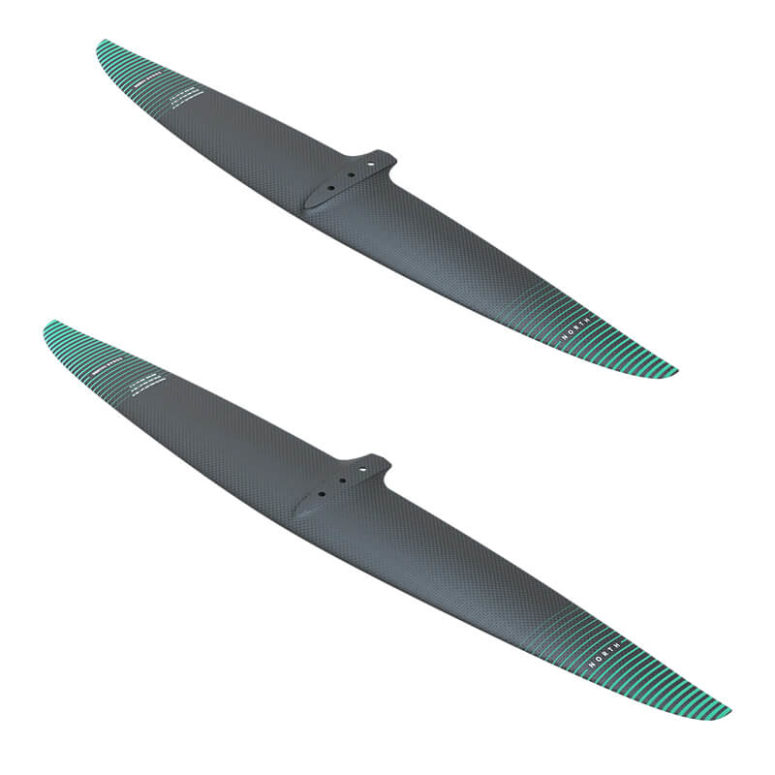 It’s clear North are fully committed to foiling sports and are building a comprehensive range of front wing sizes to cater for every bodyweight across disciplines. Their HA range is aimed at ambitious intermediates and above who want to ride with speed and efficiency, and spans nine sizes from a tiny HA550 to a mighty albatross of a HA1450, designated by their projected area in cm2. North’s Product Development Manager, Uli Sommerlatt, designs from a very methodical perspective, monitoring the exploding marketplace for a while. With his history in performance boatbuilding, much thought and attention to detail has been placed on the composite layup and distribution of force to achieve a smooth and vibration-free ride across the system.

Once excitedly liberated from the cardboard, the attention to detail in the package is impressive, with Torx tools, fully tailored carry bags, and wing and mast covers provided. The foil system breaks down into what’s essentially a well-padded square box with a carry handle, which is practical and efficient for storage be it on a plane or the back of a vehicle. There’s also tabs and elastic tie downs internally to stop them rattling around in transit.

Assembly is quick and simple; all fixings are M8, including the tail. The bolts all have blue thread lock to ensure they don’t back out during use. Some marine grease is provided to help prevent any corrosion or seizing. Putting the mast into the fuselage you immediately see a novel design concept: the mast foot has a tapered wedge shape which is pulled into the recess in the fuselage by the bolt to form an exceptionally tight mechanical joint and drag-free fit. Even with enthusiastic bending, there’s no play here at all.

The mast itself is an impressive piece of pre-preg carbon sculpture, with its molded-on top plate and gentle taper. It’s among the stiffest 85cm offerings we’ve tested of late, which is very noticeable with the larger span HA front wings. The graphics are faired into the mast so there’s no disturbance of flow over the surface, which shows exceptional attention to detail. Considering how stiff the mast is, it also comes in at an extremely competitive weight. Countersunk apertures in the base plate accommodate the bolts into North’s unique foil track system, which enables you to leave the bolts and track nuts attached to the mast and pop four in at once and slide it forward to your desired mast position. In practice, this saves quite a bit of time when setting up. Underfoot the mast provides a very direct connection to the foil, which is amplified on smaller and stiffer boards, and highly important for higher span foils.

The HA1050 and HA850 wings sit more or less in the middle of the size range in their series. The larger wing has some interesting matching numbers, with a projected area of 1050cm2, a span of 1050mm and an aspect ratio of 10.5. The design of the HA wings is interesting with a profile geared for outright speed and low drag. There’s a gentle anhedral across its span with a little flick back in the tip section. Rather than the flat wingtips we see from other brands, there’s a gentle taper to a point, important for roll mobility which can be a sticking point for other higher span HA foils.

For a 90kg rider wingfoiling, we found the HA1050 a capable choice for lighter through to medium wind conditions, paired with a 78l board to help gain surface speed quickly. It took positive power in the wing or decent pumping technique to get the foil up to lifting speed, which when it initiates is smooth and gradual. Once cruising, the level of speed and glide potential on tap immediately hits you. It has a surprisingly wide speed range, and impressive mobility in the roll axis for its span. The subtle inflection in the tips allow for some impressive tip breach and recovery. The stabilizer is a top mounted design, and gives a helpful early warning breach indicator. If you hear it start to throw water, it lends you a split second to rectify the situation. The HA850 sits well underneath its big brother as a higher wind or larger wave option, and shifts up the thresholds in high-end speed as you’d expect. It falls into the magic span of 92cm where turning attributes start to really liven up. Its top end is phenomenally composed and it builds very little front foot pressure when it reaches its limit, if you can find it. Also there’s a uniformity in riding feel across the two sizes that means you don’t need to readjust technique to adapt to the smaller wing; you simply bolt it on and ride faster. Both of these front wings exhibit gentle lift characteristics and once flying like to be kept at a decent velocity. They pair well with fast planing boards and stiffer inflatable wings with faster forward speed.

We tested mainly with the 70cm fuselage and 270 tail, which for first-time HA riders help to make these high-performance machines as accessible as possible. For the more experienced that want to spice up their ride, North are offering various upgrades in the form of a shorter 60cm fuselage and HA208 stabilizer that unlock increased performance potential in general mobility through the yaw, roll and pitch axis, as well as increasing glide, which will better match the smaller models in the range. Both foils feel frictionless and efficient though the water, and reduce fatigue through your arms on the wing relative to a thicker profiled mid-aspect wing. From a pure speed perspective, these foils are quick on paper, with GPS speeds sitting relative with the most rapid we’ve tested across brands.

So who do we think should be riding this HA range? It’s going to suit ambitious intermediates and above that have decent pumping ability and are maintaining foil flight on jibes and tacks. If you have aspirations of racing or simply riding faster, or dropping into bigger swell whether it’s winging or tow foiling, this is a system to seriously consider. The HA range definitely has a bias towards fast tow-in sports, which from a company with a strong wind sports background makes perfect sense.

North are the first to admit they are a little late to the party with their HA range, but they’ve arrived in a gold limousine, extremely well dressed and with a massive fanfare and probably some fireworks. It’s allowed them to sit back, observe market trends, and benchmark against the best available, and this more prudent approach has enabled them to release a comprehensive HA foil range that’s in line with the finest current offerings available. RB