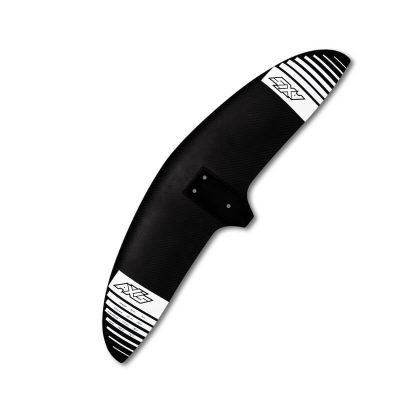 AXIS have added some larger surf performance wings to their range, building on the popular tow and big wave foiling platform of their 660 wing. As we’ve covered before, the AXIS system is extremely comprehensive across disciplines and modular so there’s complete compatibility with the rest of their range. The 860 comes in at 1293cm2 and is lightweight at around 800g. Construction is a fiberglass and carbon shell, wrapped around a recycled core. If you’re familiar with the popular 660 wing, the 860 has quite a few of the same attributes, but an enlarged span and corresponding surface area. The key features, such as the pronounced gul wing and delta swept back shape remain, but built into a higher lift and higher aspect format. The 860 also packs a different foil profile to the original S Series 920 and 1020 wings with a flatter underside and a little concave in the trailing edge that fades out to the tips, which combines to enhance the top end speed and stability.

In the water the 860 is exceptionally playful and goes a long way towards injecting the feeling of surf and skate into hydrofoiling. The speed and confidence you can go from rail to rail (or wing to wing) is impressive. It’s a wing that loves to turn with power. This is partially down to the heavy gul wing, which means when the foil is banked over into a turn, only the lower half of the front wing side is providing full lift. This is important, as once you combine the power of the wave face with an aggressive turn you sometimes have a little too much lift and flatter wings can lose control. Essentially this design digs in around the corners and allows you to make a shorter radius, more ‘surf’ like turn without losing control.

We found it paired best with the Ultra Short fuselage to do its cornering ability justice, and for stabilizers the 370 seemed to give the most balanced characteristics across disciplines. The completely flat 460 gives an incredibly loose feeling where you can drift the tail out around the corners with surprising levels of control.

The 860 is aimed straight at surf performance, but this can span over quite a few disciplines. Its riding characteristics obviously offer enhanced lift over the 660; for most capable prone foilers of around 80kg weight this is going to be the sweet size you have been looking for, particularly if you ride in more average powered waves. For a mid-size wing, the pumping characteristics are surprisingly good, and you’ll find yourself linking waves with relative ease; it seems to maintain its momentum. For slower waves, the 860 has a nice pace, and doesn’t outrun the pocket constantly. We found it very easy to maintain your position on the wave and your carves feel deep and more connected, particularly when swooping across a section at speed, where it pushes well into its top end without becoming too front foot heavy.

For powered and progressive wing surfing the 860 is an absolute peach. In flat water it immediately lets you really commit to your turns and reduces your turning radius considerably. Ideally it needs to be paired with a smaller board to do it justice. Towing into a wave it seems to find a comfortable balance between both glide and speed. Of course, the highlight is the cornering ability on the wave face, and that’s where the gul wing works its magic.

Overall, the 860 allows you to ride in a more decisive and confident manner and mixes the glide and speed of a high aspect wing with the maneuverability of a gul wing design in a practical multi-sport size. It is a very successful blend, which will increase your G-force readings on the corners and make critical turns when you need to with instantaneous heel to toe transitions. It’s poised for anything.