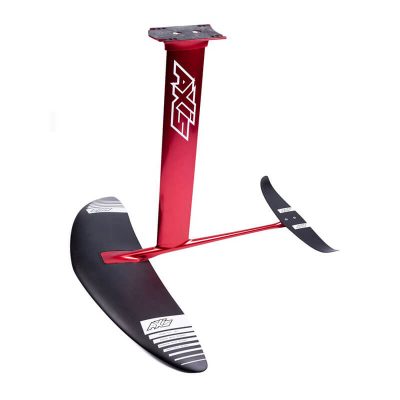 The AXIS surf/SUP foil system has become a respected benchmark in the sector over the last 18 months. The brand originate from New Zealand and are well established in the kiteboard sector. In the realm of foils, AXIS have produced a clever modular and easily customizable system with an extensive range of interchangeable front wings, fuselages, stabilizers and masts, with some wind sports crossover potential in the smaller sizes.

Considering it’s a mixed material setup, comprising carbon wings and CNC produced aluminum parts, weight is kept to a minimum, with the full setup we had on test (with a 102 span wing) weighing in at 3.5kgs, which is in the same ballpark as some of its full carbon counterparts. The fuselage is also one of the slimmest and most efficient we’ve seen. One of the most tangible highlights of the system is the overall stiffness, which at the moment is top of the field for a mass produced foil system. There is no detectable movement between the board and the foil even with the longer masts installed, and every weight input you make is translated down to the foil with no lag or loss of subtlety, which gives a reassuring feel to the riding experience. The connection between the front wing and the fuselage is also unique, with an extra wide square section which slots in cleanly, meaning no loss of efficiency and minimizing the roll, wobble and flex which is sometimes noticeable on other systems.

From a practicality perspective, the top plate has open fixing points which allow you to loosen the track nut bolts to slide the top plate out rather than completely remove them, this makes removing the foil leg for easy transport easy, and there's less chance of the foil fixings gremlin stealing your nuts in transit, which can be a common occurrence for the novice…

The full package comes with a neat travel case for your mast fuselage and fixings, Teflon gel, and a stainless tool set so everything you need to build and dismantle and avoid crusting up your fixing. The wing system comes in a plethora of various sizes designated by their span. They currently range from a smaller, faster 68cm up to a massive 102cm designed for pumping, downwinding and small surf. Mast sizes run in five increments from 45 to 90cm.

If you’re starting out and aiming for small weak waves, we found a 50cm mast and 92 front wing (or 102 wing for the heavier rider) provides confidence-inspiring stability and ease of use. If you want to take it out in slightly larger swell, and give yourself a bit more time for pitch correction, particularly when you make the drop, a 70cm mast is essential. A smaller rear stabilizer is also available which loosens up the turns dramatically and allows for tighter carves and is worth experimenting with for more proficient riders.

Worth noting is the AXIS system runs fairly pitch neutral, and – as with most surf foil set ups – require a little trimming with shims or spacers to get it right for different boards and body weights. Particularly with boards with a little rocker in the tail, we found it required approximately 10mm of shim to get it to lift correctly and run flat once flying. One of the nicer riding characteristics of the AXIS system was not having to put a huge amount of front foot pressure on, which reduces fatigue in your legs and means you don't have to adopt any bizarre body positions to keep the wing down and prevent it from breaching, thus freeing you up for smooth carving turns.

You can tell how well a foil is designed by how well it handles the extremities of its speed range, and the AXIS wings excel at this with even the larger wings able to handle a fairly rapid and punchy take off without too much fuss, which is testament to their good design. The overall build is intelligently designed and robust, particularly the attention to detail applied to the fixings and stiffness is excellent, and it is easy to interchange individual parts rather than the whole foil if you do somehow manage to bend something.

After testing across a range of conditions, the S-Series is a contender as one of the top systems available on the market currently. It’s a solid platform to kick off your foiling career with, and has enough range and customization available for you to handle most conditions, making it a system you are unlikely to outgrow quickly.