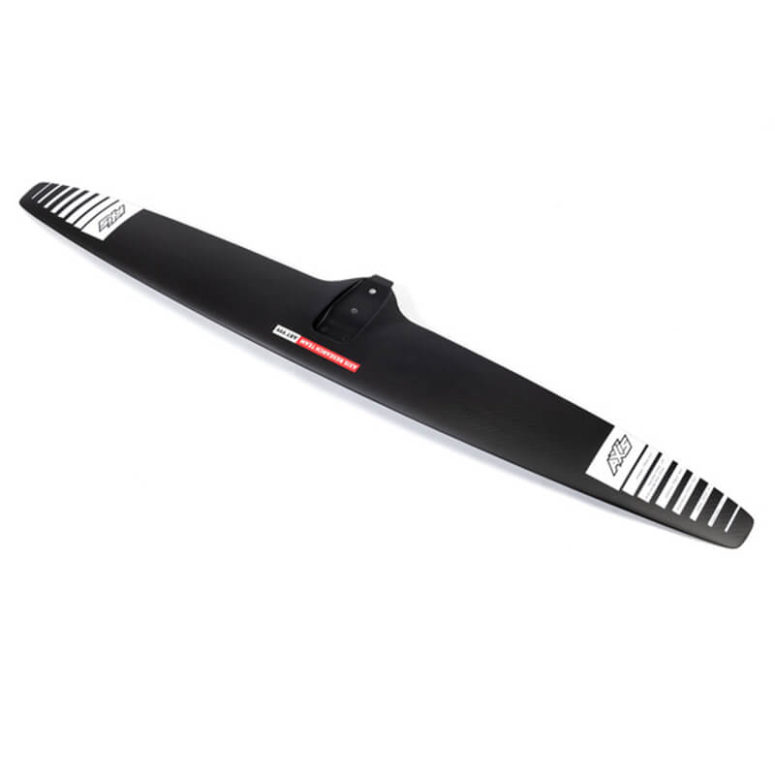 ART stands for Axis Research Team, which sounds like a covert ops department. Axis tried something a little different with the launch of the ART999 wing – they snuck a handful of wings out to a few key riders without any fuss to see what would happen. There were strict instructions to keep it under wraps until they formally released it, at which point the internet went berserk with YouTube froth. We were lucky enough to get one pre-release.

First of all, let’s examine the stats. Axis title their front wings from their span, so we’re talking 999mm wide, and a range topping aspect ratio of 9.9. Projected surface area comes in at 1010cm2, so certainly not a massive wing, bolting on to their thinner black fuselage. This means, visually, it’s an intimidating wing to behold, reminiscent in shape of some of the high-end kite race foils from a few years ago, but there’s some subtleties to the design that belie its shape and stats to turn it into something that performs and appeal to a far broader audience. In plan form, rather than tapering the tips out to a point, the width and surface area is carried all the way into the tips which are squared off. There’s also a subtle, but important downward twist in these wide tips, to smooth out the low-end stall speed.

The ART999 rides nothing like you’d expect it to. Go in with high aspect presumptions, and you’re going way off the mark. Regardless of your propulsion method, for a 1010cm2 wing, the low-end performance will far surpass your expectations, not only with regards early lift, but also how gradual and controlled this is; it’s nothing like your normal slightly choppy high-aspect low-end experience which can take a while to dial into.

What surprised us most was perhaps the SUP performance; attaching a foil of this size and aspect ratio to a high volume board looked absolutely daft, and we didn’t fancy our chances of it working well in small swell. This was a great experiment for its true low end heavily loaded, and we perhaps had some of the most enlightening SUP foil sessions to date with a level of speed, carving and pumpability we didn’t think we’d ever get on a board that size. With less board, this transfers over into prone use in an even more amplified manner. We also did a fair bit of testing behind the boat, where it sits really happily on the second wake, and you could continue pumping until your legs gave out.

Winging is a great test for speed range and aggressive carving, and the 999 seemed to handle everything we threw at it. As the sails are evolving into faster and more efficient beasts, the foils need to match. Likewise the ART999 prefers a board that planes and makes speed early; it jumps up on the foil quickly and remains very pitch stable, which is great for critically timed foot swaps, in a massive bandwidth of usability. When powering into a wave with a wing, you can depower earlier, and link tiny faces that you wouldn’t have though possible previously. The glide is absolutely phenomenal, carrying plenty of speed into maneuvers.

The other shock discovery was how well it turns, considering the reasonable span; it’s genuinely lively and snappy, you can carve it very hard, breach the tips and recover like a hero. The huge range of stabilizers available means you can tailor it depending on activity, pairing well with the faster tails from the Axis range such as the 380 and 420; these require no shimming. We also tested with the 400 flat tail and found this to give a decent boost in pumping when wave propelled. For wingfoil use we found the 380 shined the most, which pushed the top end speed range, crisps up the turning and adds a little grip in a high velocity carve. Axis never shy away from releasing new wings, and there’s a whole host of new fast progressive tail wings in the works.

The ART999 brings a new level of accessibility to a high-aspect foil, and allows a practical entry for those looking to step up their game from something more middle-of-the-road. It’s taken all the positive top-end attributes of a high-aspect wing and removes most of the compromises, adding a massive chunk of low end and practicality, and what could be a new industry benchmark in glide. Cast your prejudice aside, ignore the statistics. Anyone intermediate level and above is going to turbocharge their progression across all foiling genres.