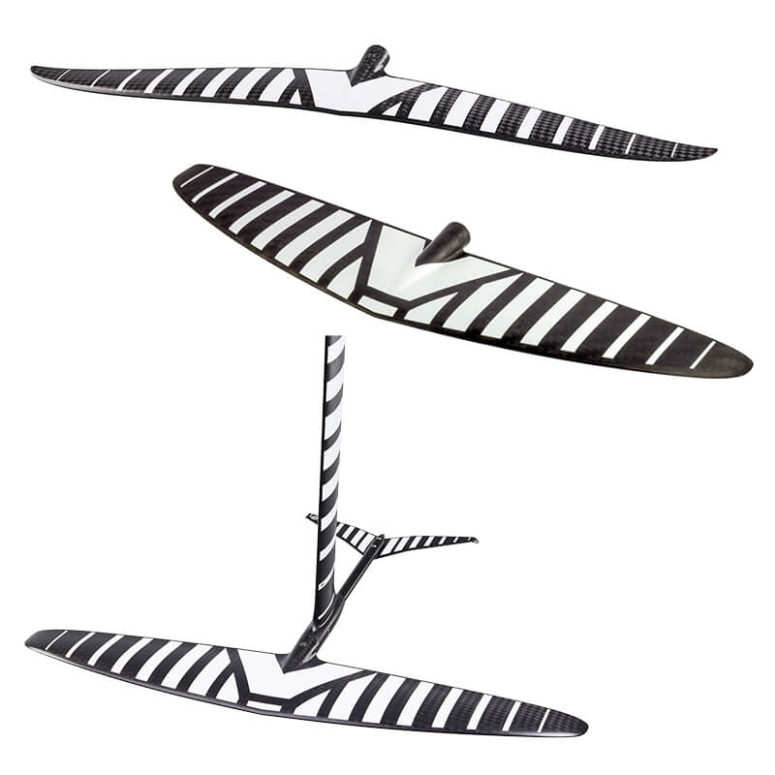 It’s undoubtedly been mentioned before, but New Zealand is a hot bed of hydrofoil development currently. Armstrong hail from Raglan, home of the fabled left-hander. Armie Armstrong is a characterful and approachable figurehead for the brand, with rich experience across a wide range of ocean sports. Add in his friend and business partner Rob Whittall who has a long history of design with Ozone paragliders and kites engineering their hydrofoils; it’s a formidable team.

The new A+ System has been designed to whittle out any play between the front wing and mast via some new fixings in the fuselage. This centers around a carbon wrapped titanium core running through the fuselage that locates itself in the mast with a hexagonal connection. If you’re familiar with the previous system, the main change for the A+ upgrade is some new barrel nuts with M6 bolts. One runs vertically through the front wing, and one horizontally. These new opposing fixing points make a great job of firming up that hexagonal front wing to fuselage mounting point, and compress any slack that may occur there after long-term use. This is vital with the increased forces associated with larger wings, which is particularly important with the introduction of their all-new wide span HA1125 front wing, with the wingfoiling market exploding, and with increasingly high impact maneuvers becoming ‘de riguer’. It’s also worth knowing there is backwards compatibility with the previous system and a few home brew modifications can be carried out.

New tech aside, let’s examine the complete package. Just by glancing at the carry bags provided, it’s obvious from the outset that the Armstrong philosophy is unashamedly high-end and uncompromising, more than justifying the void in your bank balance. It’s probably one of the most complete, detailed, and practical set of covers and bag combination currently available. It’s all tailored perfectly, lightweight, and well-padded, and all packs into a semi-circular carry bag. Foil assembly is a straightforward process, and all fixings are titanium M6 Torx, and a high-quality T-handle Torx driver as well as a screwdriver are provided. The front wing has a tapered connection onto the hexagonal fuselage; we had no issue sliding this on and off by hand using multiple wings whilst testing, but if it does decide to bind, a rubber mallet may be required to coax it free. Once assembled, the built foil is impressively lightweight. When attaching to the board, the mast foot has self-locating titanium washers to spread the load over the carbon. Ingeniously, these can be flipped 180 degrees to extend the position of the foil in the track box, a prime example of the high attention to detail present with every conceivable aspect of the system. We found the mast position liked to be a little further forward than with most foils, which aligns with Armstrong’s new Forward Geometry concept. If you are going to use a board from another brand, it’s worth considering where the track box sits in relation to the tail.

For the HA and HS wing series we were provided with the underslung HS232 tail which matches both. It comes with a plastic shim set to tune the angle. We had a good play around with this, and found the standard no shim setting will probably suit most people. If you want to spice things up a little, a few degrees at the back will make the foil more maneuverable and at the same time lower the amount of lift and increase the top end, so if you see some bigger waves or higher wind coming it’s well worth tinkering with. If you insist on loosening up the tail even more, they’ve drawn on an outline for cutting off the tips.

The HS (High Speed) 1550 V2 functions as a formidable allrounder for the aspirational rider, looking for a front wing with a decent level of low speed lift and wide comfortable speed range. For more mellow conditions surfing or wingfoiling, it’s going to deliver a fantastic balance of characteristics which provide a simultaneously sportive and reassuring ride. It’s been reworked in shape quite considerably from the V1 to give it more speed range and general performance. We were extremely impressed with its solid feeling in all situations and utter stealthy silence. It’s a simple and efficient wing to pump, and will have you linking sections of swell effortlessly regardless of your choice of propulsion. In the turns, it has a characteristic surfy feeling which is really entertaining and will help you level up quickly. You can chuck it into a tight banking turn maintaining high levels of control. There’s an air of security about it, particularly noticeable in more challenging water states. In cleaner conditions this is even more amplified, and it literally feels on rails. It’s smaller sibling in the HS1250 takes a little more persuasion to lift but mirrors these characteristics well, and pushes the top end and maneuverability further. It crosses over comfortably with the HS1550 V2 for lighter riders or more amped conditions, and doesn’t require much adjustment in technique. Both these wings are true mid-aspect multi-disciplinarians for the crossover rider and will cover a ridiculously broad range of conditions.

The HA1125 was in development for 18 months with Armstrong openly resistant to releasing a high aspect wing without seeing some clear benefits alongside the rest of their range. Visually, it looks like quite a radical design with an AR of over 9. Your visual preconceptions lead you to believe it may be a technical wing to ride and you assume it’s going to need some power to get going, be it wave or wing propelled, but it’s quite the opposite. Considering the relatively low surface area, the wide span means the initial lift is easy to achieve and nowhere near as choppy in the low end as some high-aspect foils of similar sizes. Its comfortable speed range is wide and remains very composed in the top  end. Coming from the HS1250 or HS1550 V2, which many riders will, you need to be mindful about your pitch control initially, particularly in messy surf of choppy water states, but after an hour or so dialing in it felt extremely natural, and we could drop into some meaty waves with high levels of confidence. From an agility perspective, we were impressed; the relatively short 60cm fuselage means it’s easy enough to spin in the yaw axis and rail around on. Like most higher aspect foils, it lends itself to fast high glide carving turns rather than little surf snaps, although it’s surprising what’s achievable. This wing will tolerate a breached tip to a point as well. We found it coupled well with the taller 85cm mast particularly when wingfoiling, and probably for most has a leaning towards blasting around on flat water. But for the more skilled rider the wave application is undeniable, particularly when larger conditions require a wide speed range. It’s fast, efficient, and extremely glidey and when powering into the smallest chop with a hand wing, we were amazed at how much travel you could achieve. It’s a quiver topping high octane weapon, which is remarkably friendly.

Armstrong have made some intelligent design decisions with the refinements in the A+ System and latest front wings, setting their performance, accessibility and manufacturing benchmark ever higher. Their no compromises design strategy shines through, and whilst it might seem a little coarse to mention price point, we can definitely confirm the product justifies itself on various levels.