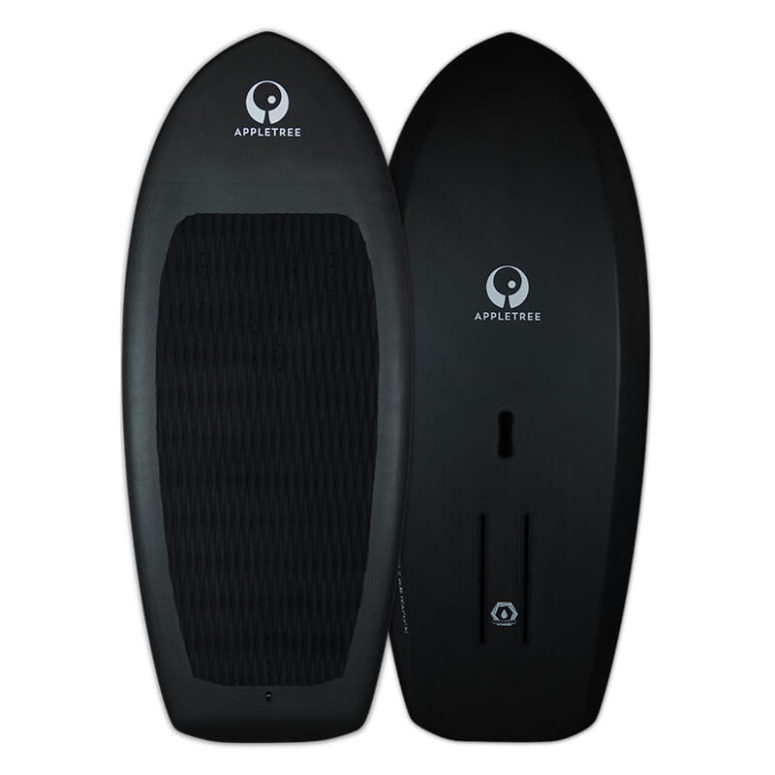 Appletree have been quietly conquering the foiling sports market in the last 12 months, with their boards seeming to manifest themselves ubiquitously in all corners of the globe on social media. Their Portuguese manufacturing facility has been running at full steam throughout spring and summer, and they’re expanding capacity as we speak. It’s great to see a brand with firm European roots grow and establish themselves.

The Appleslice V2 is quite a departure in design terms from the first version’s squarer outline, and its adoption of a more traditional combination of surf and boat hull inspired shapes are very indicative of the wing board market rapidly maturing. We’re presented with a board with far more of a traditional nose shape which almost edges more towards their prone range, maximizing its planing ability for its length. Imagine it like a miniature speed boat and you’re not far off. The tail sits at ninety degrees on the base, providing an ultra-clean release and the top is chamfered off to provide a rounded surface to slide yourself on and off. You don’t notice how much more comfortable this is until you hop back on a board with a harder edge!

We were given the 83L board on test, which for a 90kg rider we’d describe as partially buoyant. As long as you have a tiny bit of power in the sail to produce forward movement, you’re going to get on the foil as simply as with a comparable board with far more volume. Knee starting in chop, the well-placed volume bias in the nose makes the procedure rapid and easy which is important in between waves. There’s plenty of support and balance to be found in the right spot. A tough, waterproof, closed-cell foam build and cleverly reinforced foil box combined with a fairly thin EVA pad translates to a very connected and precise feeling underfoot, giving a high degree of feedback from the foil. Combine this with a high modulus mast and you’ve got a great deal of control.

It planes and accelerates rapidly on the surface at sub foiling speeds, penetrating the chop well. This gives the board an enormous amount of usable range, and the compact shape ensures it never really feels too large even when the wind is super strong. This character trait also meant it worked fabulously with some of the more extreme high-aspect foils we’ve tested of late which often require some surface speed and persuasion before they take off.

The slight deck concave keeps the standing surface wonderfully flat, sitting at a perfect 90 degrees to the foil and enabling a little more volume under the front foot area without a slope. This evens up your stance for comfortable and balanced foil control. There’s no particular bias in pressure between your front and back leg leading to fatigue. The foil box position and flat deck, combined with the fore-to-aft balance of the Slice V2 makes for an almost prone board-like pumping ability, which lets you link sections between waves with ease when things flatten out.

If you’re looking for a one-board quiver as an intermediate or above, we’d recommend dropping a few liters under your bodyweight as a comfortable solution without having to worry too much. The relative narrowness means you can engage some real angle into your turns without fear of catching an edge. For the progressive wave-biased rider who’s looking to make some more critical turns, this is ultra-reassuring.

With two wing boards in the current Appletree range, comparisons are going to be made with the Jazz, which is shorter and more freestyle focused. We’ve had the luxury to back-to-back test these extensively. The shorter per volume Jazz definitely rotates more eagerly and the extra width perhaps allows you some tougher landings. The Appleslice V2 has the same well placed footstrap inserts and definitely performs as a useful tool for getting people airborne; the narrowness allows for far better control through waves and allows a wider useable wind or power range, particularly in the low end.

The Appleslice V2 is sleek through the water, assertive and balanced whilst flying, and importantly ultra-nimble and telepathically direct under the feet. There’s definite design focus towards freeride and wave, but its abilities span elegantly into freestyle if required. It’s a striking evolution from the previous model, producing a fabulously refined build and progressive shape which genuinely helped evolve my riding style. RB