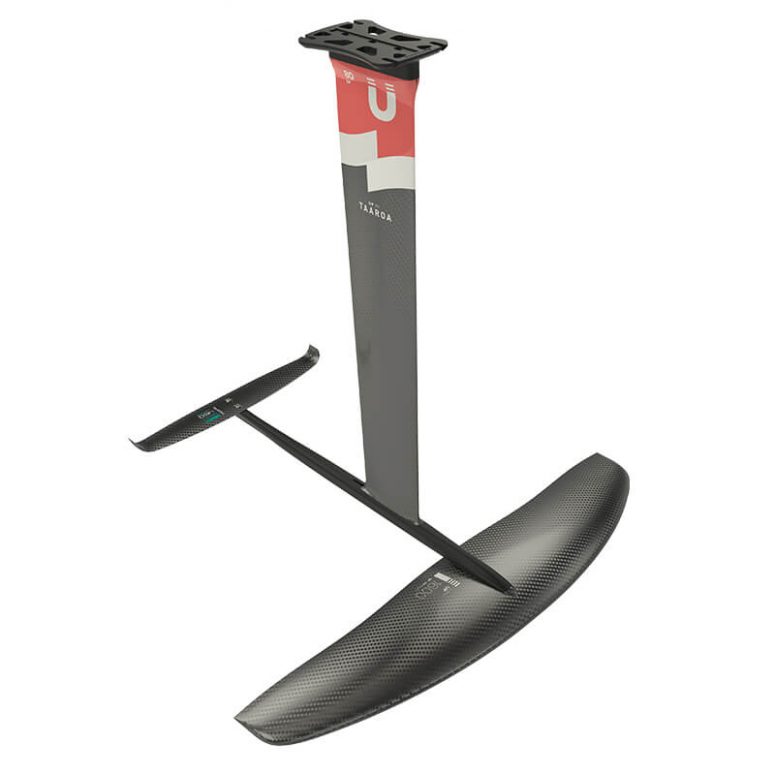 Dedicated hydrofoil brand Taaroa hail from France and have a history in designing and manufacturing foil products stretching back all the way to 2012. They recently showcased some seriously interesting iUp data-driven foils with self-trimming flaps and sensors built in, tech more often seen on America’s Cup boats rather than a windsport foil. It goes without saying they have a solid background in kite and windsurf foiling and have now turned their attention to the rapidly expanding wingsurf and surf foil market.

The Taaroa Up is their friendly cross discipline platform modular foil platform. We were supplied with the mid-sized 1600 for testing along with a HR Freerace 45 RF stabilizer. The full system weighed in at 4.82kg including the top plate which sits around mid-weight with comparable mixed materials systems.

From a build perspective, it is everything you would expect from an in-house European manufacturer and there are some neat touches to enhance stiffness and longevity in the system. The carbon work is painstakingly neat, and there is not a weave out of place. Both the front wing and stabilizer include titanium inserts molded in where the fixings compress down, making for an ultra-solid and corrosion-free connection. Three sturdy offset M8 bolts hold the front wing to the fuse and clamp it on with zero movement at the joint. The mast is a similarly impressive exercise in composite sculpture, and lightly tapers with a relatively deep chord, offering high-level stiffness in both roll and yaw axis. The mast top connection can be used with a host of different foil box adapters available from Taaroa, as well as the supplied standard 90mm track top plate. The stabilizer crosses over from their windfoil range and is high aspect with 90 degree dihedral winglets to enhance tracking. It has some angle of attack adjustment available by simply sliding back and forth on the fixings – we found the neutral position gave the 1600 front wing a nice balance out of the box. The travel bag supplied is spacious and has compartments for every foil part you could possibly desire, you could easily fit a couple of rig options in there.

In the water, lift is most definitely early for a wing with 1600cm2. The relatively thick profile in the center of the front wing pops your board up from the surface more rapidly than you would expect. The fuselage length and stabilizer combination give a massive amount of pitch stability and straight line tracking, and the fairly compact span of the front wing means there’s some maneuverability in the roll axis, which means you don’t have to make massive body weight inputs to initiate a turn whether you are paddling or winging. The turn radius tends to be wide and arcing rather than yaw snaps. The foil holds its composure very gracefully around the corners and will be ideal for those making their first turns with a wing, and the stall characteristics are extremely soft. From an outright speed perspective, the Up 1600 can be pushed fast considering its size, and rather than building uncomfortable front foot pressure and instability at the top of its speed range, it seems to just cease accelerating in and settle into a very well-balanced groove.

In summary, the Taaroa Up 1600 is a very well-behaved and friendly allrounder that you won’t outgrow too quickly. It sports high-end boutique manufacturing quality, and crosses over very comfortably between wing, surf and SUP foiling.