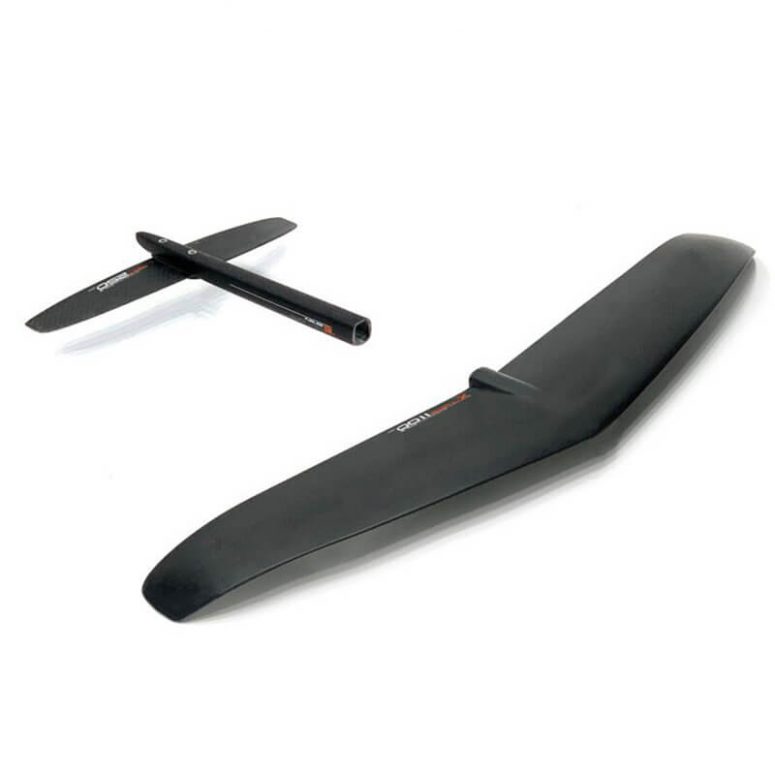 Starboard have an obvious lineage in windsurf foiling, and have won the contract for the new searingly fast and spectacular to watch Olympic wingfoil one design class in the form of IQ FOIL, which we’ll see at the Paris games in 2024. With this expertise in house at Starboard, it makes perfect sense for them to release an all-out high aspect speed machine – enter the X-Type – which sits above the S-Type and already fairly rapid E-Type foils in terms of pure pace. It slots straight onto the front of the very convenient Quick Lock platform we have covered in previous tests.

We mainly tested the X-Type with a wing, and in this context to get the most from it, it suits a smaller low volume board to minimize your windage and maximize warp speed. We paired it with the full pre-preg Carbon Light 82cm mast setup, shorter 31 fuselage tail and the gently swept Razr 250 stabilizer.

It is a featherlight front wing, sitting at 600g on our scales, and the production process is as futuristic as the wing appears itself. High modulus biaxial carbon sits over a foam core fused hydraulically in a high-pressure CNC produced mold. It is even sanded by a friendly robot! In shape it sports a relatively high aspect ratio and a notably thin symmetrical profile. There’s some pronounced gull wing and a fair amount of sweep, and downturned straight edged winglets make it look as if the wings have been clipped. It looks as if every design consideration is geared for high speed and stability.

There’s no avoiding the fact that the X-Type takes some speed and power to get flying, and you soon learn to build speed on the surface before attempting to fly. As you would expect, the low end can feel a little tricky until it reaches the flight threshold. Once it lifts, the initial acceleration and cruising speed is extremely impressive. For someone already used to riding smaller high aspect foils it is not that big a jump up in terms of skill level, and once it has reached the right speed band it is a gloriously stable experience, and far more grippy round the bends than you would expect, with those large winglets making it feel like it’s on rails. The X-Type remains playful underfoot and maneuverable, but it is not going to make snappy low speed yaw turns. It is a hydrofoil solely focused on speed and power. On the GPS we were clocking a consistent 5mph over our usual top speeds on longer runs.

For most people it is going to be a step-up foil for more critical conditions at the top of their quiver. If you’re familiar with the rest of the Starboard range, visualize the X-Type as an extension of the E-Type series with a more extreme design brief, and you are on the money. Application-wise, it is going to suit lighter guys for prone with a decent fast take off and large open faces to carve. The X-Type is definitely game for some tow-in and higher wind blasting on a wing or big wave scenarios in general. Expect wide banking turns with plenty of speed and G-Force. It is a futuristic riding experience, and the combination of the extremely lightweight mast and efficient tail means blistering speed feels crisp, reactive and excellent all round.