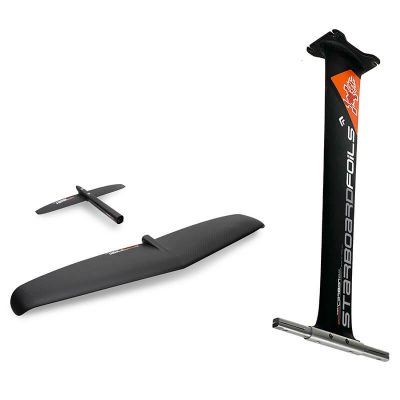 Starboard are no strangers in the burgeoning hydrofoil market and for 2021 have implemented a comprehensive multi-sport system to cover surf, windsurf, wing and SUP disciplines.

First let’s talk about the modular Quick Lock technology as it’s fairly unique in the industry currently and a focal point of the system. At the business end of the mast, on both carbon and aluminum systems, is an aluminum T piece which makes up the center section of the fuselage. This slides into the top of the fuselage with a plasticized boot which goes under compression with the fixings, and weeds out any play in this joint completely. Your chosen front wing and tail slide onto a box section divided into two leaves. These are threaded and expand with a simple M6 Torx bolt, locking the tail and front wing in place; a second M6 Torx acts as a security measure. This is extremely convenient for someone that wants to build their gear simply and quickly, or wants to swap components regularly, in fact it’s a foil tester’s dream. One M6 Torx driver does it all.

Other technical features in the system worthy of note are the fuselage fixings. These are all M6 Torx again, and the threaded sections all sit in small removable casings. This means you have stainless to stainless connections for the bolts, avoiding any galvanic reactions, as well as the ability to replace the threaded sections very simply if they did fail. It’s an incredibly well thought out system, that can seem a little complex for the initial build, but after this you don’t need to touch it, as the mast and T piece are easy to transport fully assembled, and sliding on the front wing and stabilizer is a ridiculously simple and fast process. It’s worth noting that the stabilizer is also trimmable a few degrees on the pitch axis with two simple countersunk bolts. We had a bit of a play with this and ended up running it neutrally most of the time.

We tested the full pre-preg Carbon Light 82cm mast setup, coupled with the E-Type 1700 front wing and RAZR 250 stabilizer for both winging and SUP foiling. This is the high aspect performance hydrofoil setup, geared towards faster riding than the S-Type. The quality of the carbon work in both the wings and mast is of a high standard, and the assembled foil is exceptionally light. The mast has impressive torsional stiffness considering its length and has a minimal tapered profile and one-piece monolithic construction. The E-Type 1700 sports some pronounced square tipped winglets, flattish span and a hint of gul wing.

In its riding feel, the E-Type 1700 mixes a forgivingly early take off with a high top-end and cruising speed, and a wide band of application. Those winglets grip positively and feel locked around the corners for a high aspect wing. It is a playful and light-footed ride, and the foil feels exceptionally reactive to your inputs. We found the setup paired particularly well with a smaller volume board when winging, where the lack of swing weight made it all feel razor sharp and tighter cornering. In the waves we found the 1700 to have excellent glide characteristics and an all-round efficient feel without being overly twitchy; it made linking lumps of swell in the onshore particularly easy and enabled you to ride with a lot of speed. Pitch stability in its comfortably wide speed range is very solid for a relatively short fuselage length, and makes it nice and reactive to deal with lumps and big drop ins. On a mid-size foil SUP, pumping onto a green wave required a little paddle technique to build speed before the big take off, but the low-end stall characteristics are smooth and herald little surprises. The E-Type 1700 has a little brother in the 1300 which would be ideal for bigger waves, lighter riders or anyone looking for a step up in speed from the 1700, which has a formidable top end in any case.

Much like its Jaguar automotive namesake, the E-Type is an elegant shape, with light and rapid handling experience which may well become a future classic. For anyone requiring more speed and crossing disciplines between wing, surf or SUP foiling this should be high up the list of choices.