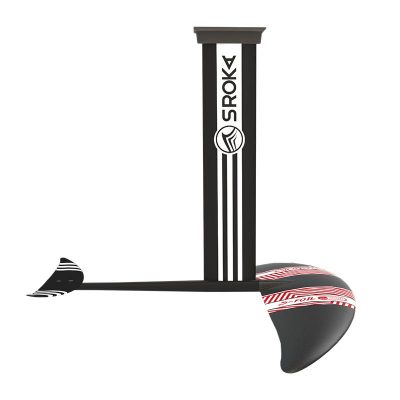 Bruno Sroka has a strong history in the world of kitesurfing and is an experienced waterman – as soon as foiling technology improved and the sport became more popular he was quick to begin developing a comprehensive range of kite foils (the K-Foil) and has now evolved the line-up to include a complete range of surf foils (the S-Foils). There are four front wing sizes available – 2000, 1750, 1500 and 1250.

For this test we are examining the daddy of the line-up – the XXL 2000 – with a view to SUP foiling and wing foiling. The front wing and the back wing are full carbon molded sandwich construction and the mast is a heavy duty aluminum profile, with a 13cm section, which is wider than some aluminum masts, and it is mounted with M6 screws on the baseplate and the one we had on test was 80cm long. The fuselage has a rectangular mounting section for the front wing with two screws tightening the system. Fuselage and mast are attached with 3xM6 screws and a hexagonal headset, and the back wing is mounted directly on the fuselage with two hexagonal headset M6 screws without shim. Mounted together, the foil feels quite rigid and there is no play in the foil connections which is good for an aluminum foil. The pedestal mounting on the board is easy and fast, the open drills of the baseplate allows you to quickly slide in the screws and be riding in no time. Rigging the foil is fast and easy with a single hexagonal M6 tool, although I do prefer torx screws instead of hexagonal for the foil assembly.

Compared to other high-ratio hydros, the S-Foil has a very thick front wing profile. The back wing is shaped with a Reflex profile with a positive pitch off the trailing edge. For surf/SUP paddling, the S-Foil doesn´t feel like it’s dragging too much and the ratio of the wing is a plus in paddling stability. Getting on to a wave and the lift is huge. As soon as the wave pushes you and you pick up a small amount of speed, the board is in the air, but the overall stability is really balanced. It is stable in tracking and easy to ride straight but feels heavy as soon as you try to turn in the surf – which is not the main purpose of this larger wing, for that there are smaller wings which we will test in future issues. This larger wing is designed for riding ocean swells in downwind conditions and – of course – for wingsurfing. In this environment the thick wing and high aspect ratio show their true colors. The take off and riding straight is really easy and balanced, and the foil accelerates gradually and provides a smooth, slow drive which is perfect for a beginner to intermediate level on a downwind run, and for longer distance runs this is a comfortable and highly predictable set up. The glide is reasonably smooth and you can connect flat sections with light pumps. The drag is perceptible and relates to the thickness of the profile but remains acceptable and I would say is a price worth paying for the early lift and accessible behavior of the foil. Pumping is effective and easy but you need to slow things right down if you have come off a faster ‘surf’ foil. The S-Foil will not accelerate by pumping harder, meaning it will stay in flight at really low speeds. You can relax and give it light pumps, taking your time to connect with the next section. The wing gives a lot of power and feels like it will never stall. With a wind wing the foil is very well suited to beginners, with the stability and the early lift giving plenty of time and predictable behavior to enable you to develop momentum and find the sweet spot. Turning is not super quick for riding with a wing in the surf, so once your skills improve, the S-Foil 1750 would be a good option for this. Overall I felt this was a well-balanced and engineered setup, very well suited to downwind and wing foiling.