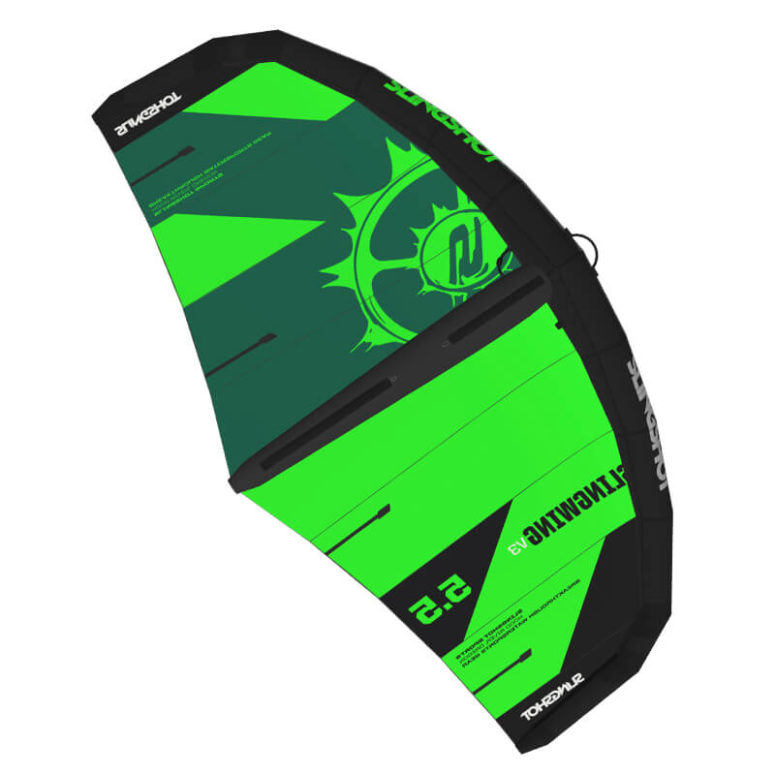 Slingshot have been around since the very inception of inflatable wings and we’re now presented with a mature third generation product from the Hood River based US brand. It’s clear from the revisions immediately apparent in the new wing, in comparison to the V2, that they’ve been listening to user feedback as well as following market trends and aiming for an easier to use, lightweight and more performant wing.

From a build perspective we’re looking at the usual 4×4 tech ripstop which is also utilized in their well-established kite range. It has a high gloss coating and is proven to have great wear properties, particularly in high wear areas like the leech. A plastic batten has been implemented in the front of the profiled section behind the strut. This forces shape into the canopy and controls the cloth when air hits the top of it, translating into enhanced stability when luffed and it doesn’t drag too much when thrown hard upwind into a tack, where other wings can start to misbehave a little. There’s also some more flexible plastic battening in the trailing edge to give control here. The wing has a generally taut feeling over its span with both the weave and seaming of the ripstop running square on to the wingtips. The leash is a Dyneema affair with some bungee spliced through it which makes a good job of taking the shock out of your wrist when flogging. The wrist cuff is constricting Velcro and is a snug fit.

Shape-wise we’re looking at a medium amount dihedral and relatively squared off wingtip, with quite an aggressive and angular return to minimize the span per size, and quite a bit of thickness carried right into the tips. The wing sits at a relatively high pressure of 10PSI and its inflation is handled by a high-flow bayonet valve – again this is carried across from the current kite range; a high flow connecting tube and isolating clip make inflation a one-shot fuss free experience. There’s also a traditional kite dump valve on the strut. Three long and wide soft handles make up the business end of the high-diameter strut, which also have optional loops for a harness line. The handles have quite a bit of slack in each loop making them a simple target to grab coming out of a maneuver. The front neutral handle is stiff, nicely proportioned, and padded for wave play, and there’s an impressive coverage of Kevlar in high wear areas over the wingtips and framing each relatively thick leading-edge section. Between the two main strut handles is a smaller central handle which allows a good mid-point for swapping hands or balanced one-arm flying.

The V3 is immediately engaging through the arms and the relatively shallow profile means that the wing requires a high frequency pump to get going, particularly in lighter airs. Once your foil lifts, you’re immediately aware this is a wing that likes to fly forward and fast. Upwind performance is efficient, with the wing generally liking a positive input through those large handles. It likes to be shown who’s boss. The strut has both a high diameter and inflate pressure making it super stiff, making it an excellent platform to load up a jump against. The large amount of trim available by sliding up and down the massive handles really improves the user experience over the more locked in loops of the Slingwing V2. In waves, as long as you maintain your speed, the V3 luffs well and isn’t going to give you any surprises. Throwing the wing into a fast tack the shallow profile and battens mean the wing remains composed with little flutter and vibration.

The latest addition to the Slingwing series continues to be a solid product, and this year definitely gets an uprating when it comes to speed and upwind ability; the latest version offers some noteworthy upgrades from the V2 particularly in the comfort and ease of use improvement in the new handles and serves as a capable allrounder for mixed discipline wing sports.