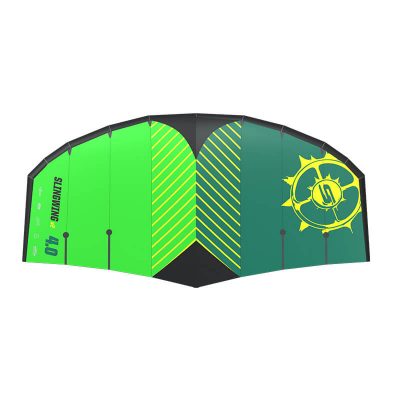 Slingshot were well and truly ahead of the game when it came to pioneering inflatable wings, with the perfect test bed of Hood River on their doorstep. Finally releasing their first serial product in 2019, the SlingWing Classic was headed off on a strong design tangent with huge leading tube diameters, and an inflatable trailing edge. It was focused on rigidity and had enough handles to confuse an octopus. It was a product focused on Gorge use – blasting around in strong gusty wind – and was without doubt successful in those conditions. The user requirements in the wing surf market have evolved quickly, and Slingshot have reacted suitably. Emerging sneakily on social media, amazing videos appeared from the Spencer brothers in Maui. There were glimpses of minimal prototype wings with Slingshot logos towing into waves with tiny foils and popping some massive jumps in and out of the pocket. The exponentially growing wing surf community were immediately intrigued, and we have now been presented with the SlingWing V2.

First off, let’s hammer home the most important message: it is absolutely nothing like the V1 that was a product that polarized opinions, and it appears to be an almost ground up redesign. 50% of the weight has been shaved off, bringing it within a few grams of the lightest available on the market. A full range of five sizes now exist from 3.2m to 6.4m.

Build wise, Slingshot are not normally famed for minimalism, but in the case of the SlingWing V2 things have definitely changed. Rather than the full barrage of handles running the length of the strut we see on some brands, there are four intelligently spaced horizontals, three of which are at the end of the strut to cater for different arm widths – it seems easy to a find comfortable position. Two 45 degree cross straps link the leading edge to the strut and give you more options. We found this a good grip point with the 6.4m SlingWing to get a little extra clearance off the water with the wingtip, and beginners also seemed to love the cross strap for getting themselves on the foil. If you are coming off a wing without cross straps, you may well find yourself using them more regularly than you would expect. All these straps are relatively thick and chunky feeling with a rigid core, so give an extra positive connection to the wing.

The canopy is made from D4 Teijin cloth, which is going to give it the excellent wear properties associated with the premium Japanese textile brand. Wings seem to take a bit more abuse than kites, with their proximity to the user and board, so it is a good move using a wear resistant cloth. Two soft battens are sewn into the wingtips to reduce flutter and seem to do an effective job. Inflate the sail using the bayonet style valve derived from the Slingshot kite range, and you can see it visibly force tension into the canopy, particularly noticeable in the leech and the heavily cambered section just behind the leading edge.

Deflation is often not too high up the priorities list for most people, but some wings can be genuinely annoying to deflate. On the V2 we have a wide aperture one-pump hose connecting the strut to the main tube, and a dedicated dump valve, meaning you can get it down quickly and easily, giving you a hope of getting the wing back in the lightweight water-repellent rucksack provided.

We tested both the 4m and the 6.4, and the sizes feel very tailored to their intended uses. The 4m excels in a wave scenario, with truly excellent luffing characteristics and fast forward speeds. It feels narrow, efficient upwind, and connected and easy to throw around. It coupled well with higher aspect faster foils and gave you the impression you were riding in double speed. Power delivery is punchy and very reactive to small sheeting inputs. In its very top end, it seems to build quite a bit of pressure on your arms, letting you know when to change down. We can’t emphasize enough how well it luffs on one handle.
The 6.4m is the largest size in the range and treats you to a generous low end. It is among the most usable of the larger wings out there, with excellent stiffness and relatively light weight. The wing gains its extra surface area in chord rather than span, and has an extended tail of canopy along its lengthy strut. Be aware that the handle spacing is quite wide, making it a little tricky for smaller humans, but they could probably easily drop to a 5.4. The rigidity and canopy tension make it very simple to pump against in a light wind scenario and get foiling. Do not underestimate the usage of the 6.4 in a wave scenario. We managed to limp out in some very subpar conditions with the big wing, and with all that power available managed to pump into some decent waves, scraping a session when you would normally be reaching for a kite foil setup.

Slingshot have truly taken the SlingWing concept from the Gorge to the Ocean with the V2, and it is an extraordinarily successful design exercise, and an intelligent reaction to the current direction and requirements of the sport.