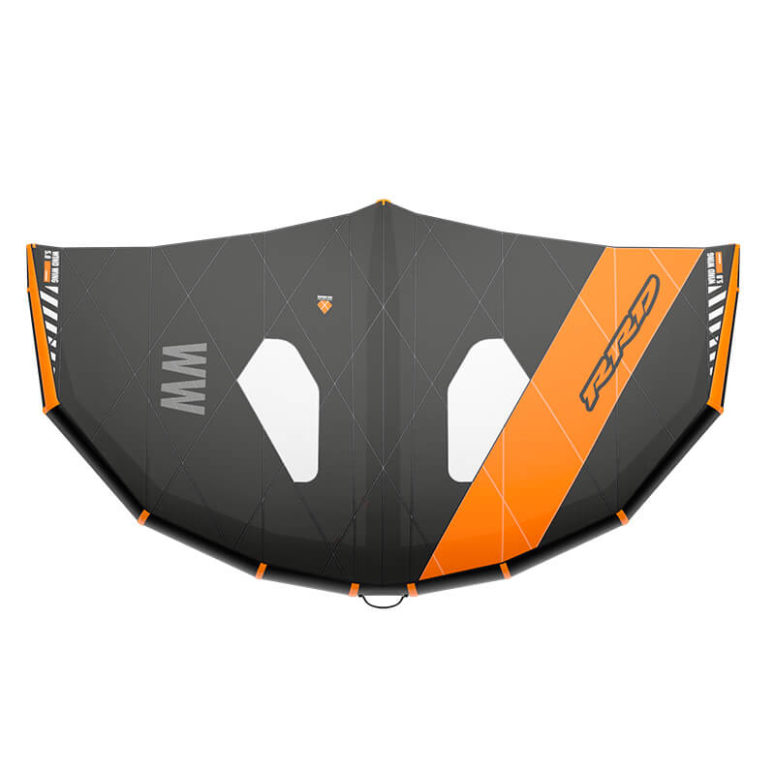 RRD has put an impressive amount of R&D into the development of their wing foiling range and the Wind Wing Y27 is no different. Developed as a high-performance wing for wave freestyle and racing, the Wind Wing has been designed with power and stability at its core. The Y25 impressed testers with its stealthy black looks, direct feel and power on demand and the Y27 is no different. This newest iteration of the Wind Wing has been re-designed to concentrate the power in the center of the wing, resulting in a more stable wing due to the reduction in pressure on the extremities of the wing coupled with even more power on tap.

Out of the bag, aside from the trademark RRD colors and style, it’s clear that RRD has optimized this wing for performance. A dual inflate/deflate (35mm Boston inflate) system allows the strut to be pumped up to 1psi higher than the leading edge and an innovative canopy provides a stiffer and more durable wing. RRD have utilized a diamond grid panel construction. The combination of 2D ripstop oriented at 45 degrees creates a canopy that is resistant to stretch in all directions, minimizing canopy stretch, ensuring the wing retains its canopy tension and high-performance characteristics for longer. As with previous models, the wing retains the kink in the strut which keeps the canopy taught and keeps the wing stiffer in general. This year's model has three large and comfortable handles which allow you to easily adjust your hand position on the go and there are two well placed windows to help you be aware of other riders and your surroundings.

The Wind Wing Y25 really impressed with its power delivery and the Y27 is no different. What is evident is how direct rider input is. This is due to both the stiff center strut and the taught canopy design coupled with a relatively deep profile. When you pump this wing you really feel the power that it generates. With a decent low end this wing enables you to pump yourself on foil with ease. However, it isn’t in the low end where this wing excels but in the high end. When suitably powered (and even overpowered) this wing comes into its own. It is well balanced with both the front and back handles being well positioned to allow you to ride with a very even feel. The wing does feel slightly heavier in hand when powered, but this doesn’t increase significantly or to an uncomfortable level as you get more into the realm of overpowered riding. This wing likes to ride fast and allows you to cut upwind hard meaning you can go on those endless downwind runs and long wave rides without dreading the upwind tacks back to the start.

Despite its slightly higher weight the wing flags well and is very stable when wave riding, staying put allowing you to focus on the wave and your turns. For maneuvers, the 5m handles very well for its size and the power on demand is great, allowing you to recover easily. This is a trait that you really notice when you jump with this wing. The ease of power generation really allows you to gain that extra height when you pop off the water, and in the air the wing is nice and stable as well.

Overall this wing is a powerhouse that caters to the race and freestyle enthusiasts with easy handling and plenty of power on tap but it’s wave riding qualities shouldn’t be dismissed thanks to its stability. JM