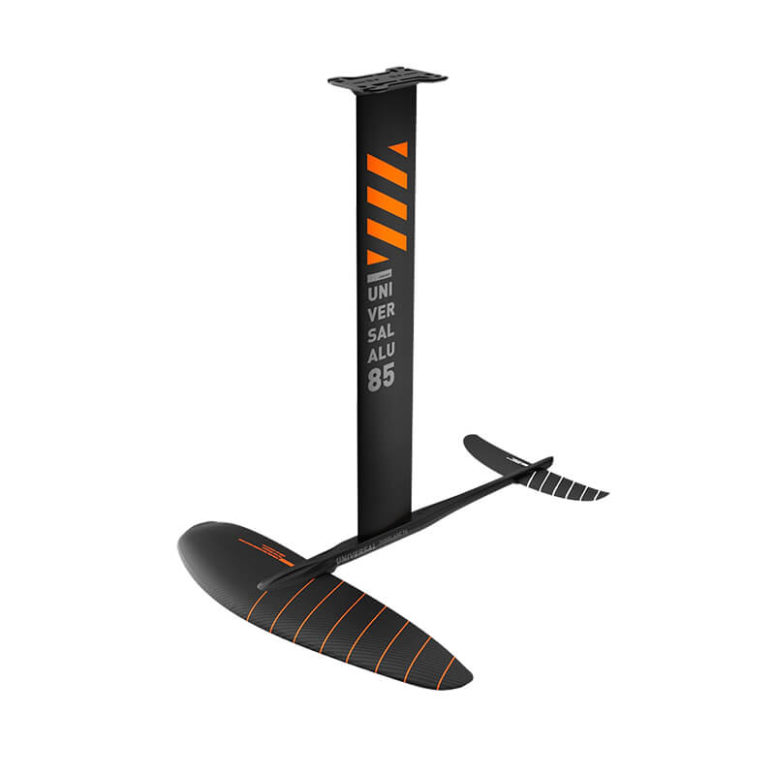 The Dynamic Pro range from RRD is their performance-orientated range which spans disciplines between surfing, winging and kiting, hence the SWK acronym. We tested the 1200 along with the Beluga 150 which served as a perfect compact vessel with a low swing weight for this size of foil.

From a build perspective much carries over from the rest of the modular RRD range, and the stabilizer is the smaller and more performant 250 Dynamic Pro that pairs well with the faster wing sets now available. The aluminum fuselage has unique channels CNC-cut down the sides to minimize its drag and weight. All fixings are sturdy M8 size, which screw into helicoil inserts set into the aluminum. Stiffness has definitely been a key design focus as the system has been developed, which is important for cross over foil systems. The 85cm aluminum mast we tested carried over from the rest of the range and shows no flex at all; it is definitely robust, with the top plate both bolted and bonded permanently to the mast. It also doesn’t tip the scales too far the wrong way with a 30% weight saving on last year’s model. We’d put the 1200 front wing in the mid to high aspect category, with a more pronounced profile in the mid-section, thinning out into the tips. It has a gentle dihedral which flattens out into the tips, with soft winglets and a full carbon shell over a high density foam core, with elegant carbon work and a low weight in the hands.

In the water the 1200 lifts admirably early for its surface area, and is extremely pitch stable out of the box. It has a smooth and unflustered character, and plenty of straight line speed. We tested on a relatively long 76cm fuselage which resulted in steady arcing power turns with plenty of surefooted stability, with those subtle winglets definitely adding to the levels of grip on offer. The relatively narrow 75cm of span means the 1200 is lively, but controlled feeling in the roll axis, and glide is maintained well for a wing of this aspect ratio.

Going through the usual set of test routine tacks and jibes, very little harsh adjustment was needed, and the turning radiuses were steady. This is complemented by plenty of glide, with the setup maintaining momentum well with the wing luffed. With a shorter fuse and looser tail, both available from RRD, you could definitely eek out even more potential, and for prone surfing we’d definitely recommend exploring this avenue. It’s worth noting that the 1200 would definitely have a decent application for freeride kite foiling.

For a high lift and an amiable smooth character, you can’t fault the Dynamic Pro SWK 1200; it’s going to suit anyone looking for a step down from their first wingfoil setup, and will provide a decent speed range and maneuverability increase without compromising too much on general stability. Its genre-spanning ability will also definitely appeal to multi-disciplinarians… RB