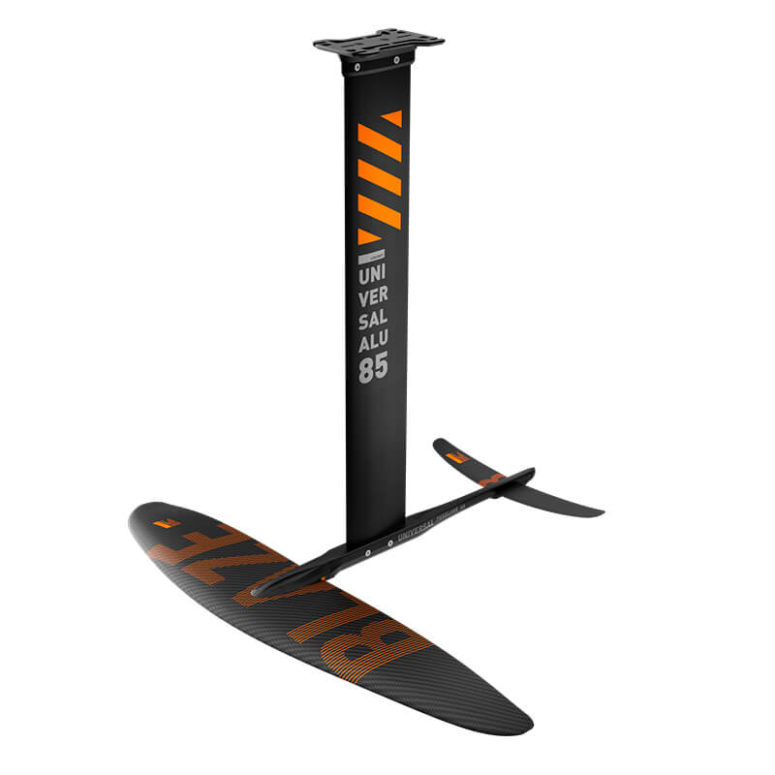 RRD continues to build on their impressive range of modular cross discipline foils covering everything from entry level foils to downwinding and racing. The Blaze range sits on the performance end of the offerings – aimed at providing a high-performance mid-aspect foil primarily for in the waves but also with multi discipline use in mind. With a reduced thickness and chord (giving an AR 6.5) it's clear that the Blaze has been designed for speed and performance.

RRD offers two ranges of masts (aluminum and carbon) in a range of sizes. For this test the 85cm aluminum mast was tested along with the 66cm fuselage and Blaze rear wing. The aluminum mast is 18mm thick and despite a slightly higher weight, one thing for certain when testing this setup was that it is stiff with almost no rider input being lost somewhere due to flex or wobble.

For this test the foil was tested using a 4’8 wing and a 4’6 prone board. We were lucky enough to test this foil across a range of conditions and disciplines from light wind and flat water to powered winging in waves (rider height 175cm / 5’9 and 78kg / 172lbs).

Since the Blaze is designed to perform across a range of disciplines it’s only fitting that we test it as such! Let's start with winging in waves. To start with, this foil is fast. Especially considering the tested foil was 1250cm2. Not only is it fast, but it's comfortable at speed without any uncomfortable front foot pressure. When bombing down larger faces this foil tracks well and isn’t nervous at all, leaving you with the ability to carve turns comfortably which is something this foil excels in. Due to the shape of the wing, it’s super easy to roll over and carve big turns with. In waves from knee to chest high the 1250 was perfect with the just right amount of front foot pressure and thanks to the stiff mast/fuse combination, the foil is very responsive to rider input. Conversely it also gives you enough feedback to be able to make subtle riding adjustments before it's too late. When winging in lighter conditions it does favor being slightly more powered to get going, though once up it has an impressive low end low stall speed. For a mid-aspect foil it carries its speed well and gives you enough glide to easily execute jibes and tacks and even goes well as a downwind foil in slower bumps (think bay run or lake).

The lift is gentle and progressive which makes this foil easy to handle in a range of conditions and also makes it a really nice foil to surf foil. The 1250 Blaze caters to all levels of prone foilers (and wingers for that matter) from those who are learning to surf foil and to the more advanced surf foiler looking for a foil for those smaller days. We foiled in pretty small and weak 1-2ft mushy waves and found that this foil really carries speed and pumps remarkably well for a mid-aspect foil. This thinner profile combined with the low drag rear wing really makes pumping the foil much more akin to pumping a high aspect foil.

All in all, the Blaze 1250 is a really fun foil with the potential to be a one foil quiver. It performs really well across a range of speeds whilst leaving the rider with complete control and the ability to execute turns and other maneuvers as they wish. JM