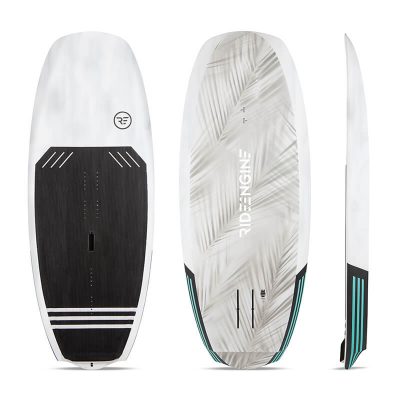 Ride Engine founder Coleman Buckley is one of the most iconic ‘out the box’ thinkers in the watersports industry, with one of his most famous creations being the hard-shell kitesurf harnesses which turned that market sector on its head in the process. Coleman has always had a hand in shaping surfboards, and the natural progression to foilboards is no surprise, particularly as the Ride Engine brand is part of 7-Nation, Slingshot’s parent company.

The aptly named Moon Buddy is a visual feast, and comes with a matt grey brushed carbon finish, and a unique palm frond pattern on the hull. The bottom shape runs a double concave to flat with a gentle spine in the first two thirds of the board. The board feels light considering its volume, and thickness is distributed fairly evenly throughout the entire length. It does a good job of hiding a lot of volume in a small package. Thumb grips run down the rails to let you handle the board easily as you clamber on, this is great when knee starting on the wing or when pushing the nose through the wave.

The deck pad is a thin comfortable black corduroy affair, and has more grip than your average SUP pad. Three white lines running across the deckpad initially appear to be decorative, but have function referencing the center of the foil box so you can glance down and make sure your rear foot is in the correct position. The deck is completely flat and has a normal SUP handle and a threaded vent plug. There is a provision for foot straps with inserts for all conceivable configurations – these accept standard self-tapping screws. A US box foil track system sits relatively far back on the board, which is good, as it is proportionally short, and you need some board in front of you.

As a wingsurf board for beginners and intermediates, the Moon Buddy hits the nail squarely on the head. The take off and release is one of the cleanest we’ve experienced and allows you to take a smaller front foil wing than normal as the board generates speed so well on the surface. It will make variable wind conditions a much easier experience. Off the surface, although 6ft long, it rides a little shorter than you would expect; with little swing weight it feels very balanced when flying, and doesn’t have all that weight in the nose that similar volume and usually longer boards harbor, which can slow up your pumping and dull inputs to the foil. If you breach and nosedive, the wide snub nose does a good job of giving you a chance at recovery, and may well bounce you back to stability. There’s a step down and more wingsurf focused 80l 5’0 also available which will suit intermediates and advanced riders with a little contingency volume to limp back if the wind dies, or for the highly skilled or lightweight paddler.

When paddling the Moon Buddy, it is well worth popping in a front keel fin which is a huge aid to the boards tracking. We tested this several times, and it makes a night-and-day difference. Due to its compact length and rail shape, the board paddles a little smaller than its literage compared to others of similar volume. At 90kgs and 6’3 tall, paddling the 6’0 was possible in clean conditions but being realistic, the larger 7’0 would be more versatile for someone of my size. If you were 85kgs and a little shorter it would be absolutely spot-on.

Coleman has curated an intelligent set of features and shape into the Moon Buddy, resulting in an eye-catching board that crosses over successfully between positive buoyancy for practical wingsurfing and a relatively easy-to-use paddle craft for people of average weight and height. He has squeezed a lot of volume into a compact shape and it’s a successful exercise.