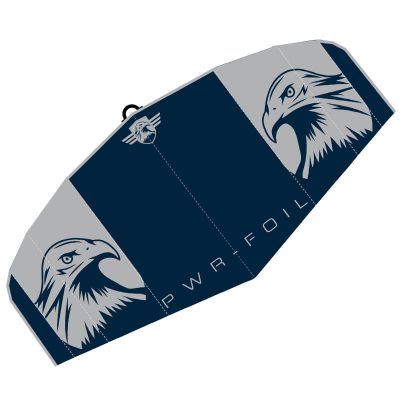 PWR Foil are a French company which serve as the foiling offshoot to Redwood Paddle, the established SUP brand. PWR backwards is, of course, RWP. They’ve been developing a carbon foil system to go with their expansive board range, as many of the compact shapes they offer already have foil track systems built in. Their E-Foil has already hit the market and they’ve also cooked up some wingsurf-specific boards, which is where the Eagle wing fits in.

On first glance, it is a simple and unassuming package, with a drawstring stuff sack bag with some rucksack-style straps for practical transport to the beach, and clips for your pump. The wing is proudly emblazoned with a slightly menacing double eagle screen print, adding some theater to your initial inflation. A triple core D3 ripstop and the Dacron tube materials are both sourced from premium Japanese supplier Teijin, and the manufacturing on the wing is up there with the best. Adequate and intelligently placed scuff protection is present to protect the wingtips. A high volume screw-in valve we’ve seen working reliably on kitesurf gear for decades makes inflation rapid. The wing takes up to a recommended 8-9 PSI easily, making for a notable rigidity in the air frame. Weight is kept to a minimum with four sensibly placed handles, making the wing feel balanced between your arms and not building fatigue in your trailing arm. The handles are fairly large with rigid loops, making transitions simple and confident; there is no fumbling around. The canopy has a medium amount of tension built in, and the now almost ubiquitous floating profiled section behind the strut is present, which probably sits exactly in the middle of most designs like this with most of the curve pushed towards the front of the profile.

On the water, your initial power development is simple and instant. The canopy feels quite taut and it seems to prefer a slightly higher frequency pump than other wings, and the low end is competitive. Immediately you notice that the Eagle is rapid in a straight line and there is no vibration at all, even once overpowered. We weighed in the Eagle at just over 2kg wet and that lightness makes the wing very intuitive to handle, and when deployed on the front handle in a wave scenario, it is composed and well behaved. Not many wings manage to be both lean and stiff at the same time, but the low diameter taper in the wingtips seem to cut the air efficiently and make some excellent angles upwind, making tacking a cinch.

The Eagle comes in at a seriously attractive price point, but its features, material choice and performance should not be underestimated. It is a refined wing and competes very, very, well with the establishment in all performance characteristics. In the immortal and often quoted words of Neil Armstrong, “The Eagle has [well and truly] landed”.