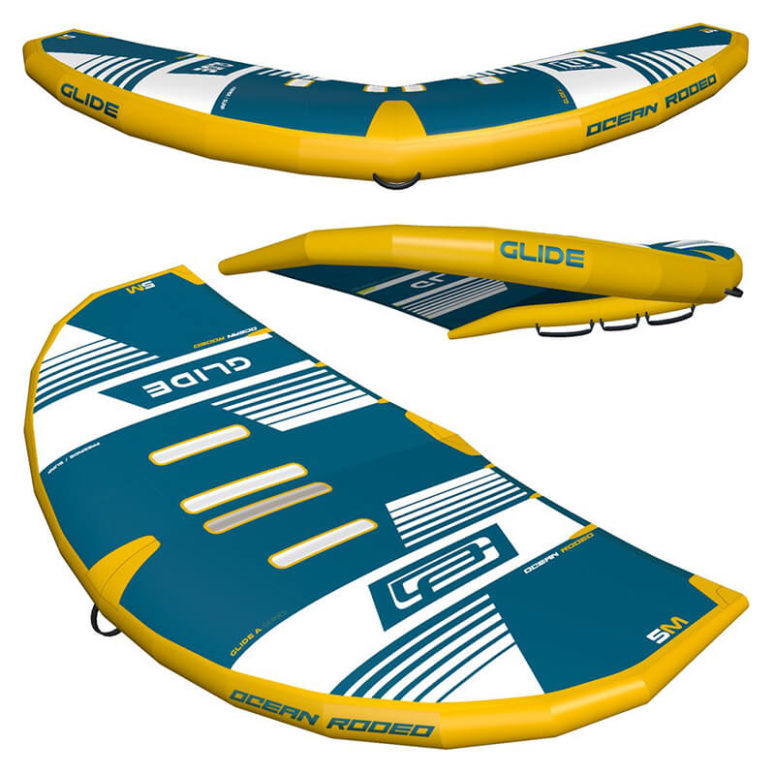 Ocean Rodeo’s first entry into the wing market comes with a wealth of knowledge gained from many years of kite design up in the freezing waters of British Columbia. A brand normally associated with robust equipment for gnarly conditions, the Glide A-Series is anything but heavy duty. This is the first wing we’ve seen made entirely from the lightweight and high stiffness ALUULA material, which has been pioneered recently with Ocean Rodeo’s inflatable kites.

Ground-breaking new materials aside, we’re presented with a relatively flowing sweep to the wing, a mid-depth forward biased profile and a gentle dihedral, making the wing relatively flat. Two arrow slit windows are present which allow some downwind awareness. The main visual difference that we see in a comparison with the existing marketplace from a shape perspective is in the strut diameter. This is very slim and exceptionally stiff with a high inflate pressure of 12psi; the front tube is pumped up to a more casual 8psi. But – without a doubt – this is the stiffest full inflatable wing we’ve seen so far. Physically trying to bend the strut is virtually impossible at full pressure.

Ocean Rodeo have implemented a modular handle system they’ve coined the Matrix, with an optional carbon boom on the way. There are some mid-diameter handles, which are really well placed with enough width to trim, particularly on the rear handle. For total minimalism, you can remove the center handle, stripping down to the bare essentials, which was great for more advanced wave riding. The handles are a comfortable diameter and made of a robust webbing. The front handle design is very well executed, stiff and easy enough to grip. It’s big enough to grab easily and its rigidity allows extra control when luffing the wing on a wave, and there’s some neoprene behind it to prevent any knuckle rub. The wing is so light, you can almost support it with just the front handle in no wind which means that, when waveriding, it has a ghost-like quality – particularly if you’re riding in onshore conditions – and you really can pretty much forget about the wing and focus on the wave. The change in materials means the future of winging is going to be lighter, easier to access and more efficient.

There’s not a hint of standard Dacron on any part of the Glide; all small reinforcements (for instance the leading edge to canopy join), window frames, and trailing edge darts are all ALUULA. The canopy is then made from D2 cloth from Teijin which makes for a decent balance of weight and solidity. One of the key differences between a standard Dacron and ALUULA wing is in the usable wind range or sweet spot. In the top end we noticed the lack of flex in the airframe meant the Glide was exceptionally composed. Where a Dacron wing would start to get out of shape, deform and become less efficient, the ALUULA just seems to suck it up and point further upwind rather than bend and drag. There is a complete lack of flapping and deformation even when completely stacked. It is more akin to a fully flattened windsurf sail. The expansion in wind range means even the most power-sensitive winger is going to have a more minimal quiver. You can easily skip an intermediate size and not feel uncomfortable.

Running into your maneuvers, the Glide A-Series has light and passive handling. The wing’s inherent efficiency means it’s not going to load irritating fatigue into your forearms. Running into tacks the wing behaves impeccably, with zero flapping even when quite overpowered. What’s also noticeable is that to generate power and forward speed, you can use a much smaller angle adjustment than with a standard construction wing. This means the user experience is far gentler, nuanced and less tiring than a standard Dacron wing. At the other end of the scale, when really powering and loading up for a jump, the wing barely flexes and loses very little power, meaning that there’s a clean translation of forward speed into orbital levels of lift.

This is perhaps the most effective application of the ALUULA fabric we’ve experienced. Making something as tactile as a hand wing from ALUULA is the perfect showcase of the new material’s attributes. It’s even more noticeable than when it is applied to kites. The stiffness and increase in efficiency achieved from the scarily rigid and low-diameter strut and far more gust-resistant airframe is truly impressive.