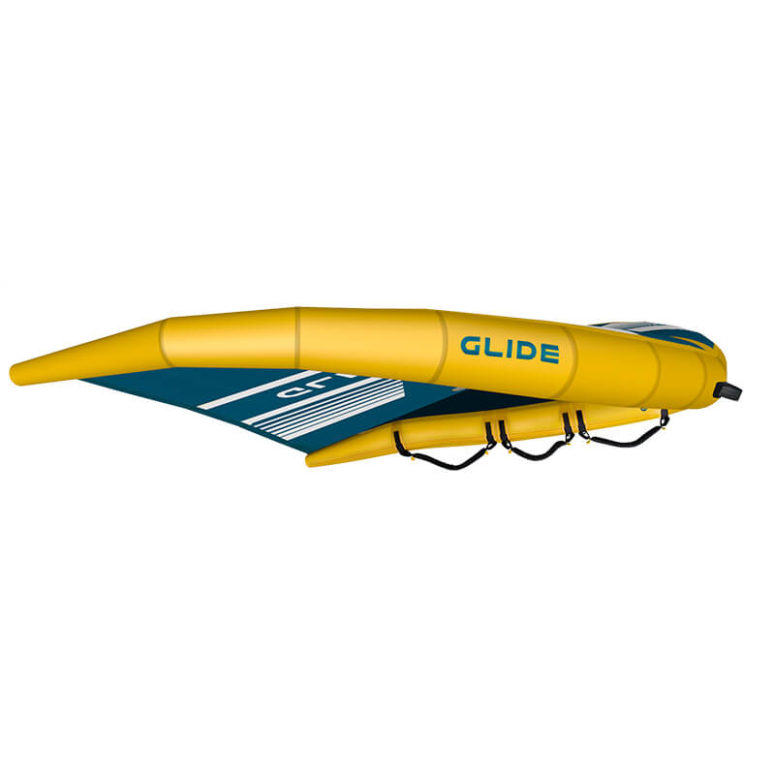 The Glide A-Series has been warmly received globally, with the stiffer ALUULA fabric, stiffer airframe and weight saving giving tangible advantages over standard Dacron wings. It makes a lot of sense for Ocean Rodeo to utilize their advanced materials, which have become well-established in pushing the lightwind boundaries of wingfoiling.

Inflation-wise, we’re packing 12 PSI into the strut, which is very low diameter and pretty much unbendable when pumped up. The leading edge carries a generous amount of diameter right into the tips, which are squared off to prevent dipping the wingtip in the water, and this 7m is roughly the same span as the 6m. The sail has the classic extension to the trailing edge that most of the larger wings across brands now feature, lowering the aspect ratio and increasing that all important grunt factor. It’s stripped down and lean, and just like the smaller sizes, all reinforcements are ALUULA, and there’s no neoprene covers on the one-pump cap. It’s all geared for lightness and efficiency from the get-go. There’s a light amount of dihedral, meaning there’s a decent amount of sail area presented to the wind when you’re flying – this makes a lot of sense for a lightwind-optimized wing.

Of course, the full ALUULA airframe means it’s extremely light, coming in at just under 2.4kg on our scales, which for a 7m is miraculously light, particularly when you consider it has some small windows integrated in the canopy. Handling the wing is as easy as it gets for a wing of this size. The minimization of fatigue is very noticeable when you’re in limp mode of having to physically hold the sail up in a lull.

When it comes to power development, the absence of flex in the airframe means you don’t really need to pump much, you can literally lower the wing into the wind and take off with a minimum of fuss. If you do need to pump a little, we’d recommend putting the Matrix handle system on the wider settings. This tightens up the response from that ultra-stiff strut and improves pumping efficiency. There’s a carbon boom system about to hit the market that could also be an excellent addition, particularly on a wing of this size and proposed usage.

It’s a wing completely geared for low end use and is going to suit heavier riders or spots with really light thermal conditions in the 6 to 12 knot zone. In some larger wings we’ve tested, there’s a fairly narrow window of usability in comparison to the benchmark 5m, but the inherent solidity of the ALUULA frame means that the wing holds its shape well when overpowered, and remains comfortable a little longer than a Dacron equivalent. In low speed or underpowered jibes, which are often a catch point of larger wings, the lightness shines through again, and if you keep the wing high, it won’t tip out on you. Its lightness means it will luff onto a wave amiably if the angles are correct, though you need to manage expectations on the extremity of your carves. The stiff front handle also really helps grapple the beast back where it should be if it does start to misbehave.

To get the most out of these light air conditions the 7m pairs better with a larger board and a larger, more efficient foil, and needs to be considered as part of a lightwind setup, rather than perhaps the basis for one. For the average sized human, taking it out with a 40l board in light wind isn’t what it’s designed for.

The 7m A-Series is a wing that’s going to open up conditions you previously wouldn’t have bothered with; it allows you to ride in super marginal conditions confidently and with low fatigue, and it’s as user friendly and efficient as larger wings get. RB