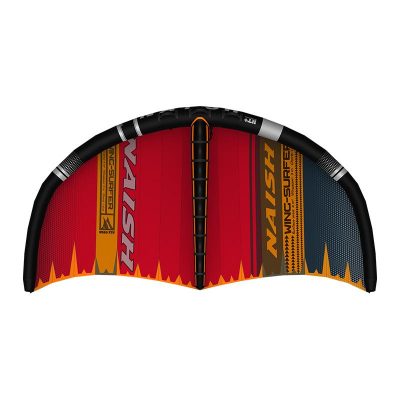 The Naish Wing-Surfer was among the first inflatable wings on the market back in spring 2019, and currently comes in one size at 4m2. Much of the technology from the Naish kite range transfers over and is implemented in the build. Recommended inflation pressure is higher than usual at 11PSI. A standard iSUP valve allows you to ramp up to this pressure easily and ensures the relatively low diameter leading edge is extremely rigid and flex free. It’s clear a lot of design has gone into the wing shape and profile, and it’s a honed shape with many leading edge segments smoothing out the airframe. The trailing edge includes Naish’s trademark Shark Tooth design to minimise flapping.
The canopy material is four core Quad-Tex from Teijin and reinforcements are Dacron. These are well proven products from their kite range and ensure stiffness and rigidity. There are eight handles running along the centre strut to suit different rider sizes and riding styles, which is a little bewildering at first, but once you work out which suits you it’s easy enough to grab your favorites and generate predictable power, having all these options also helps to remain balanced on the board and gives you plenty of options if you are knee-starting.

Nearly ubiquitous on most inflatable surf wing designs now is a floating piece of ripstop behind the center strut to give the sail a deeper cambered profile and allowing the sail to luff, improving the smoothness of the power delivery and feeling in the hands during gusts. The Naish profiled section is probably mid-sized compared to other 4m examples on the market so leaves a relatively flat wing when combined with the low diameter leading edge. Its robust build means you don’t need to be overly precious with it, as there are scuff guards on each leading edge segment and Kevlar all over the wingtips.

In the hands, the wing feels compact and flat in comparison to other wings on the market. Small changes in sheeting have a big effect in the power delivery and allows you to adopt a comfortable riding position quickly. It’s an easy wing to dump power on particularly in the top of its intended wind range. The fairly compact size tip-to-tip also favors smaller riders, as the wingtip doesn’t seem to hit the water much, which is the nemesis of the beginner wing surfer. The strut is also very rigid, probably aided by the webbing and handles all sewn in, meaning it’s very responsive to pumping and little energy is lost in flex. When disengaging the wing to ride a wave, the Wing-Surfer flies in a stable fashion, trailing in one hand. In the real low end of the wing, maybe at 12-15 knots, the weight of all that good build catches up with the wing a little, particularly if condition are onshore.

The Wing-Surfer comes wrapped in a decent backpack, and the boom includes a set of Velcro for taking your SUP paddle along. It’s a well-conceived and robust product with top tier materials used throughout and is a benchmark in wing surf simplicity and universal appeal, not just aimed at foil riders, but anyone with a SUP. It’s a well built and easy wing to handle in the majority of situations and an excellent introduction to wing-based propulsion.