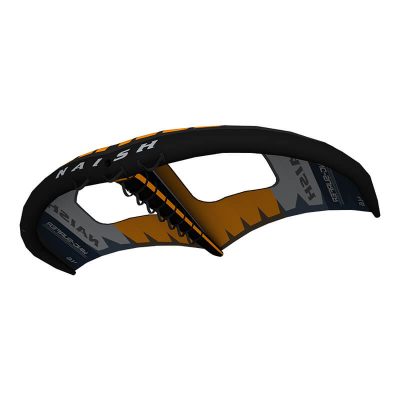 As Naish head into S25 which marks a quarter of a century of water sports legacy from the Hawaiian brand, they have been ahead of the game in the exploding wind wing sector and have now releases the second version of their Wing-surfer.

We are greeted with six different sizes ranging from 2.8 through to a mammoth 7.2. The one wing quiver theory from last year is long gone – as the sport started to find its feet it was obvious that a full range was required. The other notable change this year is some large PVC windows which fill a considerable percentage of the canopy of the wing. The luff strut remains and is a mid-sized profile depth in comparison to its stable mates.

The high pressure (7-9PSI) leading edge with an iSUP valve system carries over from the kite range; a large diameter one pump hose links the leading edge with the strut. The leading edge seam is neatly tucked in behind the canopy, minimizing any drag and keeping it well away from your knuckles. The front tube has a visible amount of segmentation, tailoring a lot of shape into the comparatively narrow diameter front tube. Kevlar reinforcements cover each of the joints and the wingtips have a noticeable taper to shed wind efficiently. Canopy wise, we are looking at the standard Teijin D2 cloth throughout, framing those huge PVC windows. Each canopy segment has a dart extending down every seam; the same applies to the trailing edge, which seems to stabilize the leech and reduce flutter.

Eight handles run the entire length of the strut giving you plenty of options. Webbing wraps the intermediate section of each to really stiffen the connection – you can feel the benefit from this when pumping the wing in light wind. Three more handles set at 90 degrees on the front tube perform a similar function to the cross straps from other brands, and feel well placed and natural to use when swapping hands during transitions. The central handle also acts as your float handle for using the wing disengaged in waves. Its low position takes a little getting used to, but the thick and stiff handle design lets you correct the wing well with your wrist if it starts to shift around in gustier conditions.

The windows make a big difference to your awareness on the water, however do not expect 20/20 vision through a wet piece of PVC without some windscreen wipers. At certain angles your view is still obscured, and you may have to move the wing down to peer through. But you are far more likely to notice movement or something approaching and as the sport increases in popularity, in a busy spot this makes a big difference.

In the hands the S25 wing feels instantly stiffer and far more responsive than the previous incarnation. The leech tension seems to have been tightened up considerably and it makes for an excellent wing to pump against. The wing feels efficient and the narrow leading edge diameter drives upwind with ease, carrying a notably high forward speed. If you are using it with a larger hydrofoil you can definitely feel that top out before the Naish wing does.
Considering the weight of its sturdy build and windows, it makes an admirably tidy job when luffing the wing on a wave. The minimal leading edge means running up into wind on a wave, or even in offshore conditions you feel less drag. The only slight compromise comes in its low end, where you can feel it a bit when you’re limping around off the foil, but overall the wind range and sweet spot has been greatly extended from the first version.

Things have certainly developed in the last year of inflatable wing design, and Naish have produced a well-considered follow up which does the long-standing brand justice. It is a true V2 product in line with the rest of the market. Build-wise, the S25 is a show piece of how a long history in kite construction can be transferred into a wing design. It is a fast, efficient and powerful wing.