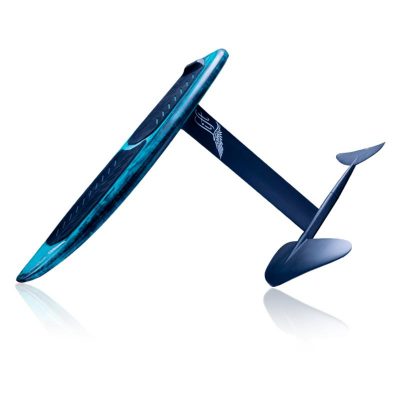 In a young sport like surf foiling, it’s not yet possible for anyone to consider themselves veterans, but if one brand stands out because of their longevity, it would be Lift. With over a decade of experience building surf foils, Nick Leason’s company produces high quality designs, premium construction, and innovations that expand the way we look at foiling. Lift has two product lines consisting of classic and powered electric foils, so it was exciting when we received a big, heavy box from their HQ in Puerto Rico… Although it’s now becoming more common across the industry, Lift were the first to apply single piece construction to surf foiling. This means the front wing, fuselage, and stabilizer are one strong, super light, molded piece. Despite the strength and weight benefits of their Classic series, it’s exciting to see Lift introduce their next generation Surf series with interchangeable stabilizers, giving the range greater adaptability and providing easier transport. The Surf series consists of five wing sizes ranging from the 100 (645 sq/cm) to 250 (1612 sq/cm), and four mast lengths from 60cm to 90cm. The entire setup is assembled with just four bolts; two for joining the fuselage pieces, and two for attaching the unit to the mast. The 70cm carbon mast on test is impressively lightweight and extremely stiff at 1.25kgs, with a tapered trailing edge and molded top plate. For our test, Lift sent over their 170 and 200 wings paired with 34 and 40 tail stabilizers. Both wings are low aspect with pronounced downward facing wingtips, giving them a more ‘traditional’ appearance as the foil market moves toward higher aspect shapes. These wings are fairly thin, but not excessively so. Lift’s stabilizers are quite flat and shaped like dolphin tails – very simple and clean. Due to the single piece construction, it’s not possible to shim these stabilizers. Lift provides fantastic, heavy duty covers that are ideal for both daily use and travel, and should last as long as the foils themselves. All parts slot together cleanly and snugly with a satisfying, engineered feel. Fully assembled, the 200 + 40 stabilizer comes in at about 3kgs with the 170 slightly lighter.

The test was conducted on a 25L, 3’6 board with a rider weight of 68kg. Wave conditions varied between 2 and 5 feet. The most immediate first impression when riding a Lift foil, regardless of size, is its light weight and stiffness. The ride is direct, lively, and sensitive without being twitchy. These characteristics don’t change much across the range, meaning that handling is predictable from one size to another. That being said, the 170 and 200 are still distinct from each other, most particularly in their glide distance and pumpability. The 200 blasts down waves smoothly and securely, thanks largely to its molded construction with the fuselage. It pumps nicely for its size, especially with the 40 stabilizer, but requires some more energy to keep it going than a higher aspect equivalent. This setup rides neutrally, and is excellent for knee to head high waves. Its little brother, the 170, has a slightly higher takeoff speed and increased banking sensitivity. Paired with the high performance 34 tail wing, this combo is a pleasure to surf, carving with very impressive speed and precision off the back foot. At only 1096 sq/cm, the 170 falls somewhat short in the pumping department, and catching multiple waves demands above average strength, stamina, and technique! Switching to the 40 stabilizer improves pumping somewhat, but doesn’t fully overcome the reduced lift of this small front wing. Lift’s very flat stabilizers have a high degree of yaw sensitivity, a performance feature which can take a little getting used to when coming from more stable platforms. Especially when paired with a small front wing like the 170, these stabilizers make the setup loose, snappy, and shortboard-like. As a result, Lift’s smaller kits would not necessarily be the easiest to learn on. As for speed, the wing shapes and thin, flat stabilizers make Lift’s foils speedy, but not the fastest on the market. Additionally, both wings hum at higher speeds and in critical turns. They glide very smoothly and efficiently, and stall speed is about average relative to wing size. Overall, the 170 and 200 are a fantastic combo that cover a wide variety of wave conditions, and the new modular stabilizers allow for a quick and easy change to pitch sensitivity to fine tune your ride.