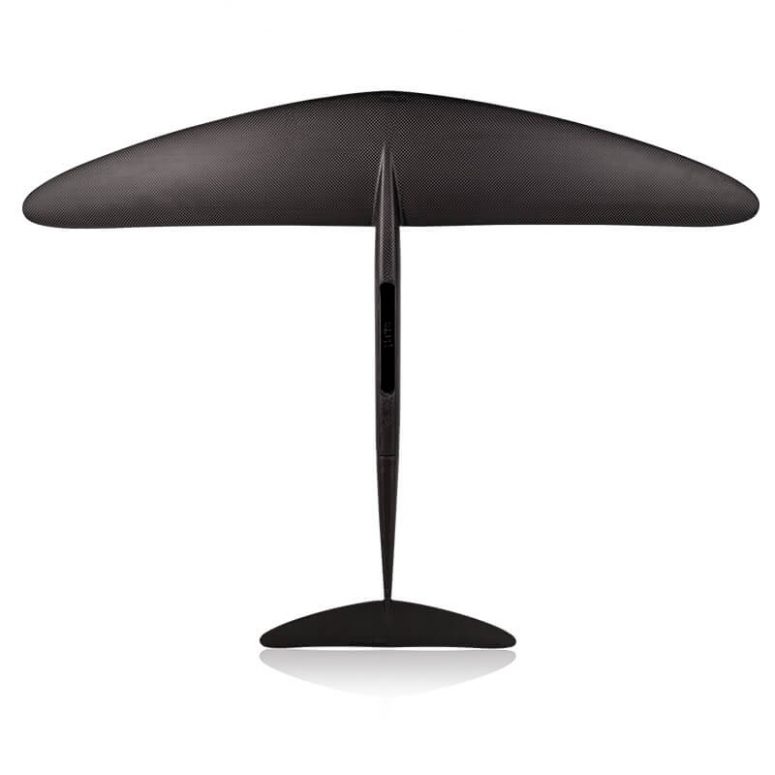 A dominant force in the hydrofoil market, Lift is well-recognized for their broad lineup. Across unpowered and powered platforms, these foils are a top choice whether chasing giant surf or motoring up inland waterways… In 2020, Lift introduced their new High Aspect (HA) family, which is composed of three sizes: 170, 200, and 250 (sq/in). With higher aspect wings having become something of a trend within the surf foiling industry for the past eighteen months, the field of crowd opinion has grown as wide as the variety of industry offerings. For a solid read on the nature of high aspect wings, I suggest referring to Dr. George Hradil’s article on the subject in Issue #3. For now, let’s take a dive into the Lift HA 170.

Assembled from two primary sections like its Surf series brethren, this high aspect foil is clearly a Lift — no surprises there. The molded carbon front wing and central fuselage are connected to the tail and rear fuselage via a male-female connection and two screws. As always with Lift, tolerances are snug and the tail takes some gentle coaxing in order to achieve full insertion and screw hole alignment. Factoring taper into the calculation, the front wing lands at an aspect ratio of (approximately) 8.7, making it fairly high aspect in the context of the current market. Looking at the leading edge outline, Lift certainly integrated a substantial degree of taper, a feature which stands out somewhat in the high aspect market. From an inline perspective, the wing features a continuous, shallow anhedral curve. With the exception of an extremely subtle upward wingtip flare, it lacks any complex curvatures. At a glance, its unusually thin foil section appears to pull broadly from the DNA within Lift’s existing Surf series. Of course, this is merely a visual overview — the countless details which make it unique are better communicated by numbers. Moving aft, Lift’s 25 stabilizer is their smallest offering, and a thing of beauty. Immensely thin and joined to a beautifully tapered fuselage, the system is a single, un-trimmable piece. A 28” carbon mast completes the package as a stiff, responsive connection to the board. For downwinding, the 32” option is recommended. In all, this beautiful piece of kit is a shining beacon of how far surf foils have come.

The two month test period during which I familiarized myself with this foil coincided with the onset of winter swells, affording me the opportunity to find its limits on both ends of the wave size spectrum. Test boards were an 18 liter 3’0, 20L 4’0, and a mix of 80-100L SUP and wing boards. Short of big wave towing, the 170 was taken through its paces — and boy, did it bring the goods! Overall, this foil has had a significant and long-lasting impression on my perception of speed and glide. Far surpassing the speeds of even the quickest foils I’ve prone surfed in the past, the HA 170 is a rocket ship. Armed with the 25 tail, this setup is impressively responsive in pitch, but not unstable for intermediate to advanced riders. At such high speeds, glide distance per pump is tremendous. This foil responds very well to good positioning — that is, flying in proximity to the surface — although breaches in level flight can be challenging to recover from. While the 170’s high speed “gear” is wonderful place to be, the wing is not the most forgiving when attempting to recover from very low speeds, a result perhaps of its thin section profile. Logic might steer us away from riding such a thin wing for this exact reason, but recall that the 170’s long glide provides a sort of buffer zone to recover should pumping rhythm be temporarily lost.

The high aspect vs low aspect debate tends to miss the overall performance of foils as a whole. Moreover, aspect ratio is only a small part of what makes a wing good or poor in that moment. Sure, a traditional foil outline might “surf” better in terms of roll rate and predictability through the turn, but on the whole, high aspects can offer a real variety in performance. If you’re looking to get into the high aspect market, remember that they aren’t intended to be a one-stop fix for all conditions, but rather an optimal solution when glide, pumping distance, and sweeping face turns are desired. I bring up this broad point only because it’s important to understand the context before making a judgment call on the Lift’s high aspect. What sets the 170 apart from other high aspects is its smooth, predictable roll rate, and ability to carry energy throughout the turn. Its flat profile, when combined with the 25 stabilizer, makes this foil quite loose and skatey as well, lending it strong points in small surf. In lumpy or open ocean swell, the 170 carries its speed beautifully up and down the face, as if egging on the longest rides possible. In more sizable conditions, the foil’s high pitch sensitivity caters best to those intermediate to advanced riders able to micromanage it. As expected for a 37” wide wing, wingtips often break the surface in turns. The 170 manages the breaches well, although its looseness in yaw can occasionally make regaining stability a challenge. So, this foil offers great sensitivity and lightning reactivity when surfing, should the rider be prepared to manage it.

For some, the goal of foiling is to emulate a shortboard. For most, though, it’s to achieve the endless glide, speed, and sense of freedom that comes from staying up for unbelievably long. The HA 170 delivers that in spades, and does so all while surfing at a level beyond expectations in the high aspect domain. So whether you’re looking to take your prone surfing to the next level, planning downwinders, or looking for something that’s highly competent for winging, have a look at Lift’s new high aspect lineup. They’re a riot.