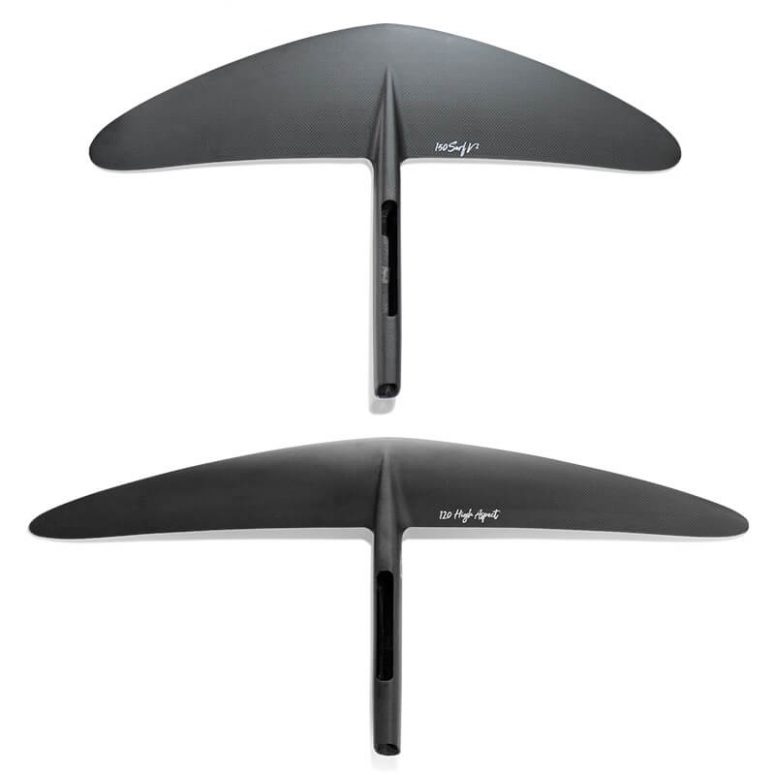 One might imagine that after upwards of a year spent in quarantine, hydrofoil designers would be out of ideas, but, happily, such is not the case. With the latest generation of foil designs has come an entirely new level of all-around performance that blows everything prior out of the water — literally.

Within Lift’s overhauled lineup, released this past February, lies the 120 High Aspect (HA). This piece of kit is a truly spectacular hydrofoil. At a glance, it’s not hard to see why this wing stirred a buzz that caused it to sell out in mere days. With an aspect ratio (AR) of 10.2 and an area of just 775 sq/cm, the 120 is more akin to a racing kitefoil than the standard fare we’ve seen in the surf sector. In spite of Lift’s reassurances, it’s fair to say the community was skeptical at best about if this wing was, well, rideable in average surf. I’d be lying if I said I was mightily confident in that myself once I opened the box. The verdict? I’ll come back to that soon enough. First, I want to convince you of why the 120’s lesser-known sister, the 150 Surf v2, should also be right up there on your radar.

On paper, the 120 and 150 aren’t much of a likely comparison. They come in at 775 sq/cm and 965 sq/cm, respectively. The 120 is ultra-high aspect with a 10.2 AR, while the 150 is merely 6.5. The 120 is built from specialty carbon fiber, while the 150 is constructed from the “standard” fare (standard being high end to begin with). Both are quite thin, with subtle twists to their wingtips. While clearly from the same parents, these siblings seem to have little else in common. It’s the overlap between their strengths which has drawn me to make this comparative review. For me, the 120HA and 150 Surf v2 are an epic two-punch quiver proposal. Think Jekyll and Hyde, Batman and Robin, or Han Solo and Chewbacca. Not sold yet? Hear me out.

Briefly, here are the test specs: I come in at 165lbs/75kg and am an advanced rider. My board for the test was a 20L 4’0. Over my three month test period, conditions varied between ankle high glass and choppy overhead surf, with everything between mushy sandbars and supersonic point breaks. Lift’s 28” (previous gen) mast and 25 Glide tail completed the setups. With that out of the way, let’s dive into the performance brief.

The 120 in particular is not beginner friendly. Even as an experienced rider coming directly from reviewing Lift’s 170HA, the 120 demands a substantial jump in attention to detail when flying. Looking down at its incredibly narrow chord (distance from leading edge to trailing edge), the wing screams pitch sensitive — and that’s exactly right. This characteristic makes itself most apparent in critical drops, where letting the wing get ahead of you will almost certainly lead to a spectacular breach. Whether on the first wave or the thousandth, the 120 never ceases to amaze with its truly unmatched glide. Unhindered by area or thickness, speed and acceleration on this wing are on immediate tap whether on the wave, pumping, or on an open ocean lump. Thanks to effortless glide and subsequent speed, the 120 covers tremendous distance per pump, leading to an impressive number of multi-wave double ups. Unlike any other high aspect on the market, this wing surfs naturally and predictably — almost imperceptibly so from a full-blown surf wing. In spite of a slightly narrower span than the 170HA, the 120’s unique combination of foil section, chord, and aspect ratio (among other more subtle differences) make it a higher performer all around than the bigger wing. Now, I’d like to ground my perspective with a reality check: for all its superpowers, the 120 is a small wing, and I can hardly guarantee any intermediate or advanced rider above 80kg/175lbs will manage to initially fly it in surf less than chest high. This wing demands a quick and clean popup, and a rider able to rapidly trim to level flight. So know what you’re getting into and adjust your expectations accordingly…

The 150 Surf v2, then. Can this more “modest” surf wing compare favorably to its sibling? Most certainly, and I’d argue these wings complement each other to the degree that you should strongly consider buying one with the other. Against the 120, the 150’s pitch is less sensitive, but still more reactive than 95% of what’s on the market. Bank is telepathically smooth and more linear than the 120. Tracking is improved somewhat in the 150 over the 120 thanks to its curved profile. On a wave, the 150 offers truly world-beating performance. Smashing whitewater? No problem. Banking so steeply your rails get wet? Of course. Snappy top turns akin to a shortboard? Bring it on. The 150 is a tremendously fun surf foil, and in my forty-odd sessions with it, I expanded my riding limits noticeably. As for pumping through the flats, this wing falls just short of its brother. Like the 120HA, the 150 is thin, fast, and carries superb glide for its outline, just to a less extreme degree. For a wing that surfs this well, such effortless pumping really is the cherry on the cake.

Why buy both? A foil quiver should provide two primary options: a setup for small surf and downwinding where glide and speed are what make things entertaining, and another rig that’s suited to punchy, sizable, or hollow conditions. At this stage in surf foil design, strong pumping qualities are a standard expectation for any design. Anything beyond that is a bonus, and both the 120HA and 150 Surf v2 deliver class-leading glide, so that’s not a concern. Where the 120 is easy to surf but challenging to surf hard, the 150 rips right out of the gate and pushes you to progress. Where the 150 glides a bit less, the 120 goes for days and is a true rocket ship. Where the 120 can be intimidating on a hollow, punchy wave, its sibling is confidence-inspiring. As I’ve said before, everything is relative, and with enough time on either of these wings, the distinctions above are blurred.

So, if you’re an intermediate to advanced rider they’re an incredible pairing, or fantastic as singular additions to any quiver. For intermediate riders reaching for the next step, I might suggest keeping your 170HA or 200 Surf v2 until you feel like you’ve squeezed every last drop out of what it can offer before you move on to these guys: they’re pretty radical…