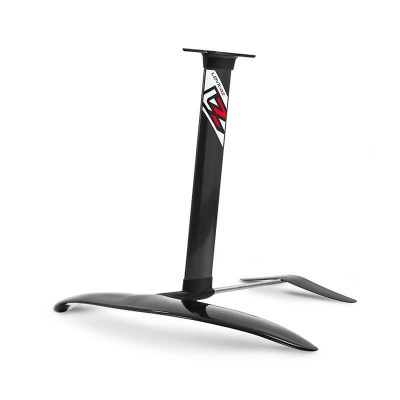 Levitaz have been at the forefront of the kite hydrofoil market for some time now, producing some super high end modular systems and a comprehensive range of wings, from full pre-preg carbon race setups to more standard and friendly freeride gear. We were intrigued to see how they would enter the surf foil market with the Shaka, which is currently available in medium and large sizes, with the large sitting at 2000cm2 and an aspect ratio of 4.5. The brand’s parent company, Geislinger, produces industrial couplings such as clutches for ships and trains so you can rest assured they know their engineering and are meticulous when it comes to production.

The front wing of the Shaka is relatively mid aspect, with a span of 95cm and a central plate section swinging its way back neatly to meet the cylindrical stainless fuselage. There are barely any points of drag on the connections, it’s a smooth elegant shape which looks efficient visually and has a definite hint of stingray about it. We tested the Shaka large size with a 75cm mast in knee to head high waves over the course of a month and it handled more or less everything we threw at it with some serious poise. We shimmed it about a degree positive, to account for the tail rocker on our 120L test board. Compared to other surf foils in this size range, it’s a playful experience, and has a noticeably early lift at around five knots for an average sized rider, which can be a little surprising at first. It’s sensitive and very reactive to ride, but once you dial in you can make smaller radius carves than you expect with such a large front wing, and this allows you to get to the point of the wave you want to be with very little hassle. It’s an easy foil to control your pace with, and seems to sit easily in the wave face, particularly once you’re minimizing drag by sitting high on the mast. Once you find its comfortable height you glide really well, and in complete silence. The Shaka matches the pace of the wave well, particularly when it’s small, and its pumping ability is also pretty simple to initiate. Where these larger early lift foils can get a bit interesting (particularly when paired with an anhedral stabilizer) is in their top speed range, which can force the rider to become very front foot heavy. With the Shaka this really wasn’t the case. In sensible sized waves, we genuinely struggled to top it out, and in the end we resorted to burning some fossil fuels to find its limit. Behind a boat, it didn’t seem to top out until we hit around 15 knots, more than enough for SUP and the majority of surf foiling.

The build and finish on the Shaka is amongst the most refined on the market, it’s a meticulously well manufactured product which oozes quality. The component parts fit together with extreme precision and no expense has been spared on the fixings. For a full carbon foil mast it’s relatively stiff in the yaw axis and what’s more it’s very competitively priced. If you own something this beautiful, you want to protect it in transit and the cover set for the wings and mast is well tailored and minimal. It’s a great piece of equipment and, as a first entry to the surf, SUP and pump market from Levitaz, the Shaka foil is up there with the best.